Cases from the Respiratory ward

17 year old female from Soweto. She presented with a non productive cough of 4 weeks duration. There was no history of chest pain, hemoptysis, shortness of breath or night sweats. She had no previous history of chest problems and she had never smoked. She was otherwise well.

Her vital signs were normal. She was not wasted. There was no evidence of clubbing, cyanosis, or lymphadenopathy. She was apyrexial. On examination of her chest, there was a scoliosis, decreased chest expansion on the left side with accompanying decreased breath sounds and crepitations. The rest of her examination was normal.

Her blood tests including an arterial blood gas were normal. Bronchoscopy revealed inflammation of the left main bronchus with evidence of distal airway dilatation and bronchiectasis and pus in the lumen of the basal segments. Bronchial washings were normal. 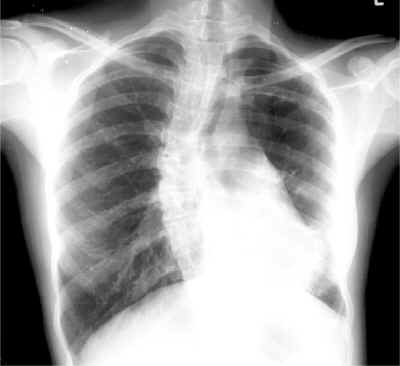 Chest Xray shows evidence of marked scoliosis. There are changes consistent with old fibrocavitatory tuberculosis in the right upper lobe. On the left the lung markings are absent and there is a small cystic lesion in the lower lobe on the left 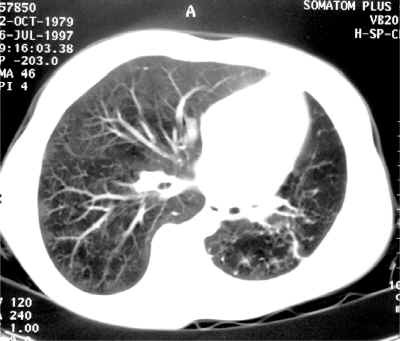 High resolution CT scan of the chest showing a small L hemithorax with small L lung and secondary infection in the LLL with large cavity formation and hyperinflation of LUL. There is also mild bronchiectasis in the left lower lobe and decreased vasculature marking on the left.

Also known as the unilateral hyperlucent lung or Macleod s syndrome. It is an uncommon disease that is considered to be an acquired lesion that follows a number of lung insults, usually in infancy or childhood.

The condition typically follows a lower respiratory tract infection in infancy or childhood. Thus it is a post infectious form of bronchiolitis obliterans following a number of lung insults;

These tend to be variable and it is often an incidental finding on chest xray. Most patients are asymptomatic in adulthood. Others may complain of a cough, recurrent chest infections, shortness of breath, or hemoptysis.

The diagnosis is essentially a radiological one. The syndrome is primarily recognized by it s characteristic radiographic appearance of;

Other diagnostic modalities such as bronchoscopy, bronchography, angiography and scintigraphy are also used to rule out other differentials such as;

More recently CT scans especially high resolution scans and spiral CT angiography have shown to be valuable modalities in confirming the diagnosis of SJS. It also allows for precise evaluation of vascular, bronchial and parenchymal structures.
CT scan also shows that although classically considered to affect one lung or lobe, the disease may be more heterogeneous in distribution and that contra lateral parenchymal lesions can be present.

The prognosis is generally good. Most patients have an asymptotic course unless the opposite lung becomes diseased. The treatment is generally symptomatic. However, surgery should be considered if secondary infection or bronchiectasis become severe.

CONDITIONS THAT MAY PRESENT AS A UNILATERAL HYPERLUCENT LUNG