Bachelor of Arts in Film and Television

Students interested in the medium of the moving image will find Film and Television an exciting and creative option.

Whether you are an aspiring director, creative producer or someone who wishes to write the most innovative South African stories for film or television, the Bachelor of Arts in Film and Television (BAFT) will offer you numerous learning opportunities.

BAFT courses offer students theoretically-informed and production-based learning in a range of formats from documentary and fiction short films to music video and experimental filmmaking - as well as offering specialised courses in cinematography, postproduction, studio production and sound design with an emphasis on developing specific skill sets. The undergraduate programme runs over four years and offers students the opportunity to interrogate multiple aspects of filmmaking rather than providing a specialised technical training.

The four-year degree includes a 2-year foundational programme, which requires students to take two general ACADEMIC courses, along with the two obligatory PROFESSIONAL courses offered in the Film and Television division.

The core PROFESSIONAL courses in first and second year are:

These courses impart an understanding of the crafts, techniques and processes of film and television production – i.e. with a focus on practical creative skills.

These courses explore the techniques of writing, interpreting and previsualising stories for film and television, as well as looking at the theory and history of the moving image –i.e with a focus on conceptual skills.

The ACADEMIC courses in first and second year are:

In the third and fourth years, students are able to select from a range of courses to suit their interests: 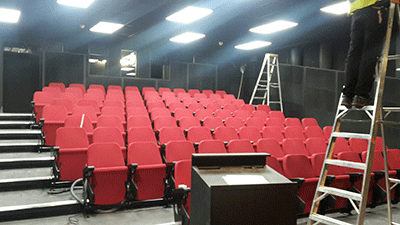 Wits Film & TV Department has a new state-of-the art cinema for 2020. This provides a dedicated teaching space that meets professional standards that also offers the Department exciting new alliances and partnerships with the professional industry and film festivals.