At the Wits School of Electrical and Information Engineering (EIE), we work in diverse industries and conduct research in a broad range of areas. Our community of engineers and scientists specialise in numerous fields: power and energy, software engineering, machine learning, telecommunications, biomedical engineering, electronics, signal processing and control, high voltage and even lightning!

Through our engineering research we are continually making breakthroughs that enable people to communicate more easily, manage their environments more effectively, and lead more comfortable lives than ever before.

Wits EIE has awarded electrical engineering degrees for nearly one hundred years, and our educational programmes have been at the cutting edge since their inception. We provide in-depth education in engineering principles that are built on mathematics, computation, and the physical and life sciences, ensuring our graduates are versatile and well equipped for the future.

We encourage our students to apply what they learn through projects, internships and research. We are proudly successful in our mission to produce graduates who are capable of taking up influential leadership positions in the fields of electrical engineering and beyond. This is evidenced by the number of  who are founders and directors of well-known companies, as well as those who have played leading roles in developing some of the technologies we employ everyday.

The University of the Witwatersrand, Johannesburg, or Wits as it is affectionately known, is a major residential university situated in Johannesburg. In the years and decades following its humble origins, the University would go on to become an internationally recognised leading institution of higher learning and research. Wits has, and continues to, produce alumni of global eminence in many fields, including Nobel Laureates, industrialists, literary luminaries and others. Today, Wits alumni are to be found in leadership positions at many of the world’s great universities, medical establishments, companies and other institutions.

During the 1930’s, electrical engineering, which had previously been part of mechanical engineering, became an independent branch of engineering at the university and it became possible to attain the degree BSc(Eng) in Electrical Engineering.Professor Heather had, since 1914, been Professor of Electrotechnics, and he continued in this position after the formation of Wits, serving under Professor Orr who was in charge of all branches of engineering. In 1926, Professor Oswald Randall was appointed to the chair of Electrical Engineering.  This coincided with the occupation of the first engineering building at the new Milner Park campus. At around this time, the government put in place policies to encourage diversification and local manufacturing in the economy.  This had a major effect on the demand for engineers, including electrical engineers, who now had the prospect of finding employment in a range of industries outside of mining.

Despite the great depression, the years after 1933 were characterised by a period of strong economic growth in South Africa.  This, combined with the abandonment of the gold standard, which had the effect of increasing the gold price, resulted in a surge in demand for engineering activities in South Africa.

As early as 1930, the possibility of establishing a lightning research laboratory was proposed, and later, Bernard Price, who was general manager and chief engineer of the Victoria Falls and Transvaal Power Company, took steps towards the creation of a geophysical research institute.  Price not only championed this endeavour, but also made a personal contribution towards its creation which was co-funded by the Carnegie Corporation of New York.

In 1937, Wits established the Bernard Price Institute of Geophysical Research which was charged with conducting research into,inter alia, seismology, lightning, terrestrial magnetism, meteorology and radio communications.  While this institute was separate from the Electrical Engineering department at Wits, many of the research activities were closely allied with Electrical Engineering.  In fact, it was intended that the work of the institute would not only be to conduct pure research, but also to serve the electrical and mining industries.

Basil Schonland, a physicist, became the Carnegie-Price Professor of Geophysics at Wits and director of the new institute.  Schonland’s work resulted in the institute becoming internationally renowned in the study of lightning, an area of active research within Electrical Engineering at Wits to this day.

The advances in electronics during World War II highlighted the distinction between so called Light and Heavy Current engineering. Randall, who was a Heavy Current specialist, but who recognised the rapidly evolving importance of electronics,  advocated that two separate electrical engineering departments be set up to cater for this division.  Professor G. R. Bozzoli (Boz), who, while still a junior staff member in Electrical Engineering at Wits, had been part of Schonland’s radar team, succeeded Randall to the chair.  Bozzoli, who’s main interest was in acoustics, was not in favour of having two departments. He was a firm believer in providing electrical engineers with a more general education rather than early specialisation, and this philosophy remains a cornerstone of the Wits Electrical Engineering degree to this day.

Bozzoli did, however, recognise that the two disciplines required senior staff with different backgrounds, and in 1957, he oversaw the creation of a second chair in Heavy Current. The first incumbent of this new chair was Professor William (Bill) Cormack.  Bozzoli remained head of department, and continued to occupy the original chair which was named the De Beers chair in Electrical Engineering in recognition of its sponsor.  Bozzoli’s greatest strengths were in administration and teaching.  He was able to deliver a wide range of courses, and was recognised for his humanity, vision, and his promotion of others.

When Bozzoli became Deputy Vice Chancellor of the University, Cormack succeeded him as Head of the Department of Electrical Engineering, and Professor Hu E. Hanrahan became the incumbent of the Chair of Electronics as light current became known, and later the Chair of Communications Engineering, with Professor Mike G. Rodd taking over in Electronics.  Professor Jan P. Reynders succeeded Cormack as the incumbent of the Chair, and also served a period as Head of Department as did Professors Rodd and Hanrahan.  Other chairs had also been introduced, such as Control Engineering. Professor Charles F. Landy became Head of Department and was succeeded on his retirement by Professor Ian R. Jandrell.  Jandrell has research interests in high voltage and a passion for lightning research, thus continuing a tradition started all those years ago with Basil Schonland.

Electrical Engineering at Wits has produced numerous luminaries. A few examples should suffice to illustrate the extent of Wits’ prestige. Louis Jacobson, who graduated in 1931, founded Alpha Harris which was later incorporated into First Electric Company of South Africa. Jacobson’s companies were responsible for the design and manufacture of a wide range of heavy electrical machinery. He later joined with Carl Fuchs to start F.W.J. Electrical Industries which became legendary. Trevor L. Wadley, widely regarded as one of the world’s truly gifted electronic engineers, was part of the Special Signals Service radar team during the war. A graduate of Howard College (now the University of KwaZulu- Natal), he later earned a DSc at Wits for a thesis entitled ‘Heterodyne techniques in specialised radio instrumentation’ in which he included his world-renowned work on radio, ionospheric radio propagation, and most famously, the Tellurometer. Another truly eminent person to graduate from Electrical Engineering at Wits was Tingye Li, who subsequently worked at AT&T and is internationally recognised as one of the giants in the development of lasers and optical communication.

At the turn of the millennium, the School reviewed the structure of its undergraduate programmes to meet contemporary needs and introduced the Bachelor of Engineering Science degree to compliment the professional degrees. Prof David M. Rubin, a Specialist Medical Practitioner with a Biomedical Engineering qualification joined the staff and developed the 3-year Bachelor of Engineering Science Degree in Biomedical Engineering, which is designed to be followed by one of a number of programmes including Electrical Engineering and Medicine. The first students began studying biomedical engineering in 2003. Similarly, in 2012, the school launched a BEngSci degree with a specialisation in Game Design in collaboration with the Wits Digital Arts department. The graduates of this program are now highly sought after in industry as they are not only expert programmers but have an eye for good visual design and feel - an obvious requrement in almost all modern apps and software. 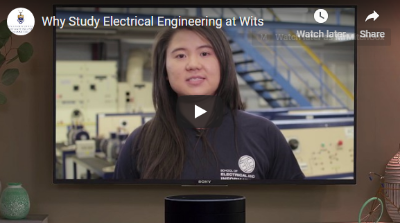 See what EIE is all about, and the impact that our students are making

Log in to engage interactively with your lecturers, fellow students and course materials