Wits University is situated in Johannesburg, South Africa - a vibrant, leading commercial city on the African continent. The history of Wits is linked with mining, academic excellence, and with political and civic activism.

Birth of a University 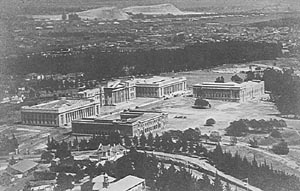 An aerial view of the University s Milner Park campus, 1930

In 1923, the University gradually vacated its premises in Eloff Street to move to the first completed teaching buildings at Milner Park (the Botany and Zoology block - housing the departments of Geology, Botany, Zoology and Applied Mathematics). The University had, at that stage, 6 faculties (Arts, Science, Medicine, Engineering, Law and Commerce), 37 departments, 73 members of academic staff and little more than 1 000 students. In 1925 the Prince of Wales officially opened the Central Block.

During the period between the two world wars severe financial restrictions were imposed upon the University. Nevertheless, student numbers were quite impressive - in 1939, 2 544 students enrolled; that grew to 3 100 in 1945. The sudden increase in student enrolment after the Second World War led to accommodation problems, which were temporarily resolved by the construction of wood and galvanised-iron hutments in the centre of the campus. These huts remained in use until 1972.

The acquisition of additional property in adjacent areas became imperative. The medical library and the administrative offices of the Faculty of Medicine moved to a new building in Esselen Street, Hillbrow during 1964. The Graduate School of Business was established in Parktown in 1968. In 1969 the Ernest Oppenheimer Residence was formally opened in Parktown. Savernake, the official residence of the Vice-Chancellor, also located in Parktown, was made available to the University in 1969. In the same year the clinical departments in the new Medical School were opened. However, the Medical School moved premises again and is now situated in York Street, Parktown - the complex was opened on 30 August 1982. 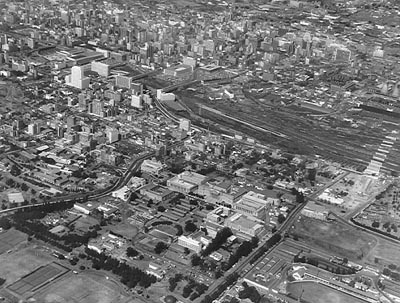 Expansion into Braamfontein also took place. In 1976 Lawson's Corner, renamed University Corner, was acquired. Senate House, the University's main administrative building, was occupied in 1977. The Wedge, a building formerly owned by the National Institute of Metallurgy, was taken over by the University in 1979. The Milner Park showgrounds were acquired in 1984 from the Witwatersrand Agricultural Society and renamed West Campus. Today, the campuses are some 400 hectares in extent. In 1989, the Chamber of Mines Building for the Faculty of Engineering on the West Campus was opened, and the brick-paved AMIC deck was built across the M1 motorway to link the East and West campuses.

From the onset, Wits was founded as an open university with a policy of non-discrimination - on racial or any other grounds. This commitment faced its ultimate test when the apartheid-government passed the Extension of the University Education Act in 1959, thereby enforcing university apartheid. The Wits community protested strongly and continued to maintain a firm, consistent and vigorous stand against apartheid, not only in education, but in all its manifestations. These protests were sustained as more and more civil liberties were withdrawn and peaceful opposition to apartheid was suppressed. The consequences for the University were severe - banning, deportation and detention of staff and students, as well as invasions of the campus by riot police to disrupt peaceful protest meetings.

With the dismantling of apartheid and the election of a democratic government, the role of Wits as a resource became increasingly important: staff members and researchers are approached on a daily basis by the media, commerce and industry to give their expert knowledge and opinion on a wide variety of topics. 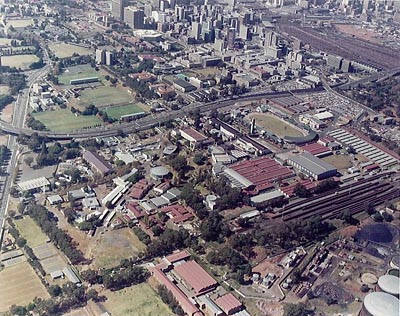 Over the years, the University of the Witwatersrand became internationally recognised for academic excellence and extensive research activities. During the Second World War members of the University staff took an active part in the original development and construction of radar. Wits was the first South African university to have a nuclear accelerator, to have a computer, to study building materials and early Afrikaans, to produce a systematic climatological atlas of Southern Africa and to achieve a successful graft of plastic cornea.

The country's first dental hospital and school was established by the University. It was also a local first in the field of physio- and occupational therapy and the first South African institution to open a clinic for the treatment of speech defects. The first blood transfusion service in the Union of South Africa was started by Wits medical students; the Medical School undertook the first clinical survey of childbirth in African tribal conditions. The University's scholars have also greatly advanced the theory of human origin and evolution. And there are many more such examples.

Today, with five faculties (Commerce, Law and Management; Engineering and the Built Environment; Health Sciences; Humanities; Science) and 33 schools, Wits offers approximately 3 400 courses to 41 000 students. Over a third of the student body comprises postgraduate students. Library facilities consists of two central libraries and 12 branch libraries with students having access to over 1,5 million books. Approximately 5 000 students are accommodated in a number of residences and student villages. There are 42 sport clubs and many cultural opportunities in the form of over 60 student societies, the Wits Theatre, art galleries, concert hall and 7 museums.

Renaming of Places and Spaces

2016
Senate House renamed to Solomon Mahlangu House.
The renaming of the space is in commemoration of struggle stalwart Solomon Mahlangu.
Read about the institutional naming here.

2017
Central Block renamed to Robert Sobukwe Block.
The renaming commemorated Robert Sobukwe’s service to the University and his contribution to fighting apartheid. Sobukwe, an intellectual of Pan-Africanism, founder and first president of the Pan Africanist Congress, was celebrated for his role in initiating and leading the anti-pass law protests of 21 March 1960.
Read about the plaque unveiling here.

The Mathematical Sciences Building has been renamed in honour of Dr Thamsanqa Wilkinson "Wilkie" Kambule.
Dr Kambule is widely acknowledged as an inspirational teacher and leader who fought for high-quality black education in apartheid South Africa. He was a leading mathematics educator who joined Wits in 1978 as a Senior Tutor in the then Department of Mathematics, serving as a role-model for about a decade. He was elected to the Council of the University in 1989 and awarded an honorary doctorate from Wits in 1997. In 2002, Dr Kambule received the Order of the Baobab in Gold for his exceptional contribution to mathematics education, human development and community service. This was followed by an honorary doctorate from the University of Pretoria and honorary membership of the Actuarial Society of South Africa.
Dr Kambule held a Teachers Diploma from Adams College (1946) and a BA degree from UNISA (1954) and also founded the Pace College in Soweto. Dr Kambule is an example of a mathematician who served the field of mathematics and mathematics education in the country with distinction. It is hoped that by naming the building after a leading African mathematician, it will inspire future generations of mathematical scientists to excel in the discipline.

Engineering students gather early in the morning on the first day of September each year and prepare breakfast to celebrate the arrival of spring. While they are meant to wear pyjamas, many students nowadays just dress outrageously.

Not condoned by the University, this risqué tradition of Knockando Residence students running naked through Parktown to visit the women’s residences after imbibing ‘Courage Juice’ has endured for decades.

Superstition of the Jacarandas

Spring in Jozi brings with it the blossoming of the beautiful Jacaranda flowers. Witsies believe that if one of the purple flowers falls on your head, and you haven’t started studying for your year-end exams, then it’s probably too late and you’re doomed to failure.

Mining Engineering students don their underground mining gear for Skiffyskofbaas Day in July/August each year and traipse around campus in a mining- related rendition of ‘trick or treat’. ‘Skiffy’ translates loosely to menial worker (‘skivvy’), while ‘skofbaas’ refers to a shift boss. After the festivities the students down a pint at Ore House on West Campus. Nowadays Skiffyskofbaas Day is known as the more politically correct ‘Miners’ Day’.

In what originated as a fundraiser to beat a Guinness World Record for the number of participants in a pillow fight, Witsies now gather on the Library Lawns every September, armed with pillows to pummel each other in a riotous explosion of feathers, fabric and foam.

The standard ‘uniform’ for students at Wits University today is jeans and a T-shirt, but just 40 years ago the University had strict rules about acceptable dress on its grounds.

The Mr and Miss Wits beauty pageant used to take place annually in the Great Hall with a panel of celebrity judges. During their reign, Mr and Miss Wits were required to do charity work and to encourage students to do the same.

For many decades, Wits students held an annual Rag (Remember and Give) Parade after an intensive six-week charity fundraising campaign. After many festive nights spent decorating their floats, students would take to the streets of Johannesburg in their finest fancy dress, parading through town and showing off their fabulous floats in an attempt to win the award for best float. In the run-up to the parade, students would hit the streets selling copies of Wits Wits Rag magazine, in a campaign commonly known as the “Wits blitz”.

Each year, a Rag Queen was elected and, after the parade, a Rag Ball was held in the Examinations Hall. The ball was always a most elegant affair where only evening gowns and dinner suits were considered appropriate attire.

Graduation Ball was a festive and formal annual event organised by students. The Ball, usually held at the Wanderers Hall, saw a host of high-profile guests mingle with recent graduates dressed in their finest attire, in the hope of being mentioned in the local newspaper. The Hall was decorated in Wits blue and gold, and dinner, drinks and dancing to a live band were the order of the day. The SRC election results were traditionally announced at the Ball.

Today Wits University sport is most famous for its Premier League football team, Bidvest Wits FC or the “Clever Boys”. However, back in the day, rugby was the most popular game on campus and the Inter- Varsity tournament against the University of Pretoria (“Tukkies”) was the highlight of the sporting calendar. For weeks prior to the match, students would gear up for the game with sing-songs to boost morale and student support. New students would learn the varsity song, led by cheerleaders.

There were also clandestine raids between the two universities, mainly involving students living in residence. The raids were a fun way to rile the opposition ahead of an important match. In 1956, a Wits University raid resulted in Tukkies’ administration buildings being painted red. The controversy generated by such events resulted in the raids being banned in the 1950s. Though students continued the raids illicitly, they eventually stopped in the 1960s when a student was killed in a car-chase.