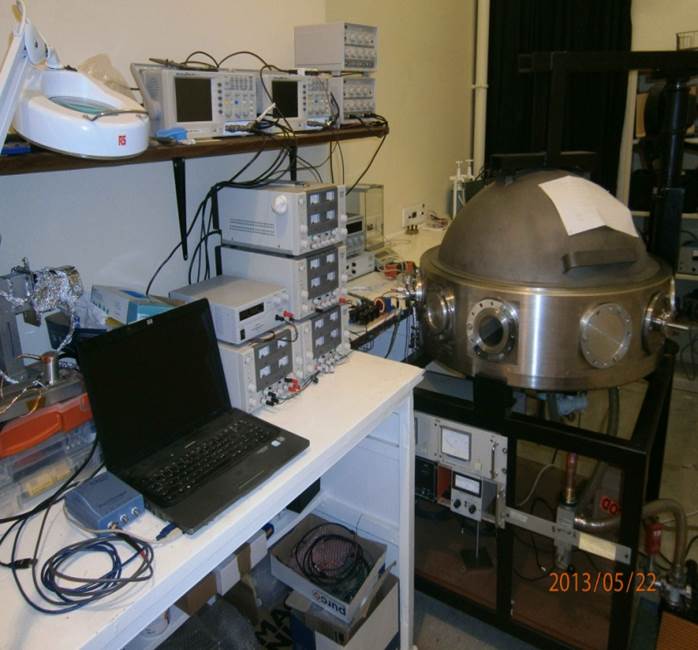 The 75cm diameter stainless steel vacuum chamber (in picture on right) is equipped with two diffusion pumps to achieve vacuums in excess of 10-6mbar.This chamber simulates conditions very similar to the ones found in outer space.

For flow rates a micro-orifice flow meter is used, and high voltage is regulated via a precision power supply.

Over the past four years, the lab has received a number of additions which forces us to move to a bigger venue by the end of 2013.

For diagnostics, there are a variety of tools available. 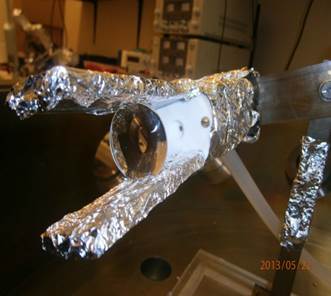 A spectrometer mounted on a robotic arm is capable of determining plume plasma composition and temperature. Movement of the robotic arms is able to determine a temperature field within the plasma plume. The temperature has a bearing on the efficiency of the thruster.

An insulated plasma thermocouple is used for low temperature determination.

For erosion analysis, both visual and electron microscope images are analysed (the latter with an EDS analyser).This is an important tools used for lifetime determination of the thruster.

Thust is measured using a micro-thrust balance capable of measuring in the micro-newton range. Sensor include a laser probe, a Hall sensor and recently a magnetic link balance.

Many measurements are computerised, such as the directional ion flux detector (See picture below).

The Wits propulsion lab has developed a new type of thruster, called the corona ionization thruster (Corion). It has the following characteristics:

On Right: The Corion thruster in operation.

The plasma plume created by the Corion thruster needs to be described mathematically, to identify important design parameters and optimise performance. Also, the thrust mechanism is not entirely clear and our models do not capture the complete thrust behaviour. Work modelling the electric and thrust behaviour is still on-going.

In order to take more complicated phenomena such as a full plasma analysis into account, closed solutions for the equations describing the system can often not be found. In such cases computer simulations are useful in order to gain insight into important physical aspects of the thruster.

Simulations are also used to predict the orbital behaviour of a thruster mounted on a satellite in space.