Wits University today announced it has successfully secured R8 million in seed funding from the Department of Science and Innovation (DSI) towards implementing Phase 1 on behalf of the South African Quantum Technology Initiative (SA QuTI).

Approved by the DSI earlier this year, the SA QuTI is a national undertaking that seeks to create the conditions in South Africa for a globally competitive research environment in quantum technologies and to grow the local quantum technology industry.

Wits University, a leading quantum research institute in Africa through its newly formed WitsQ initiative, is the official host of the SA QuTI and will administer and manage the funds. It will also coordinate the implementation of the SA QuTI.

“The objective is to move South Africa into a quantum future where government, industry and academia work together for the development and deployment of quantum technologies,” says Distinguished Professor Andrew Forbes, Director of WitsQ and Director of the Structured Light Laboratory in the Wits School of Physics.

“It is a very exciting time to be in quantum, and I believe that Wits has an important role to play in this field. We are regarded as world leaders in high-dimensional entanglement, we have unique experimental facilities, and our WitsQ initiative is home to an enthusiastic quantum community that has no traditional discipline boundaries,” he adds.

Dr Robin Drennan, Director for Research Development in the University's Research Office, says Wits is proud to act as a host for the SA QuTI and looking forward to working with all the partners from several universities and research institutes across the country that are part of this national initiative.

“This initial grant from the DSI is received with deep gratitude. Quantum technologies offer a new frontier of research and innovation, and this grant shows a clear and confident vision expressed by the Department.”

“It is so important to support the existing research efforts in this budding area to ensure that South Africa remains competitive in these areas of endeavour. It will of course also add impetus to Wits’ efforts in the field of quantum technologies and our access to a 50 qubit quantum computer,” says Drennan.

Wits University has a unique quantum advantage through its partnership with IBM Research by becoming the first African partner on the IBM Q Network and has access to its 50 qubit quantum computer. 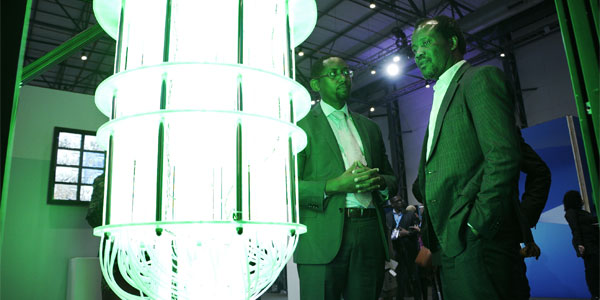 In Phase 1 the funding will be used, among other projects, to support quantum technology development initiatives at Wits University, the University of KwaZulu-Natal, the Cape Peninsula University of Technology, and the National Metrology Institute of South Africa. The SA QuTI has pre-allocated some of the funds towards supporting identified undergraduate, postgraduate and postdoctoral students in quantum technologies from various universities.

“South Africa cannot compete with the billions of Euros invested in quantum technology development in other countries. That is why we have to be strategic by bringing together our quantum community – research, academia, government and industry – to save decades in time and money,” explains Forbes.

Three years in the making, this national roadmap to drive quantum technology research and innovation, have three main focus areas:

Each focus area will have one flagship project that serves to drive science through to technology and allow for faster uptake by commercial partners.

“The philosophy of SA QuTI is to side-step the competition.  Take the smartphone industry: you don’t have to be a smartphone manufacturer to be part of the smartphone revolution – the economy of smartphone apps is huge, perhaps even bigger than the phone industry itself (think Facebook, Whatsapp, Twitter and so on). We see an analogous situation in quantum.  In quantum computing, for instance, we will not be building a quantum computer but rather develop ‘quantum apps’, a faster and cost-effective way to make an impact that leverages on our capabilities in software development,” says Forbes.

In quantum communications the idea is to focus on technology integration from partner institutes across South Africa, comprising sources, detectors, protocols and networks, to establish local quantum secure links between universities, key government sites, and strategic industry locations such as banks.

As a consequence of the investment, WitsQ, the new quantum initiative at Wits gets a R2-million seed fund injection.

“I am very excited that WitsQ has some seed funding so that we can grow our internal community to leverage off the national programme. We plan to use the funds to grow the Wits quantum community by seeding small projects, and bringing new students into the fold,” says Forbes.

The University of the Witwatersrand (Wits University) is a leading African university ranked in the top 1% of universities in the world. In 2022, Wits celebrates 100 years of academic and research excellence, social justice, and the advancement of the public good. In our pursuit to positively impact humanity, our innovative technology-driven research aims to transform and prepare society for a collective and common digital future. Our research output has doubled in the past five years and offers new ways to impact society for good, as well as astounding ‘moonshot moments’ that give us hope and inspiration. Visit https://wits100.wits.ac.za/. #WitsForGood