The year ahead: From legal rights for robots to a Cyber 9/11

Artificial Intelligence will be maturing over the next 18 months with Africa becoming ground zero for 4IR disruption.

Africa as the Cradle of Humankind has also been the ‘Cradle of Innovation’ where our earliest ancestors were the first techies on the planet, developing stone tool technologies and early culture.

Now, with the Fourth Industrial Revolution (4IR) we are seeing Africa as ideally placed to be the ‘Cradle of Disruption’ in digital innovation, says Philip Kiracofe, adventurist and CEO/co-founder of Startupbootcamp Africa.

He was speaking at the 5th 4IRSA Partnership workshop for representatives from the financial services and business sectors held in Sandton on 2 April 2019.

4IRSA (Partnership for the 4th Industrial Revolution in South Africa) is an alliance between the Universities of the Witwatersrand, Johannesburg and Fort Hare, and Telkom and the Department of Telecommunications and Postal Services (DTPS). It has held four workshops to date that aim to gather broad insight from South Africans with the purpose to stimulate and facilitate an inclusive national dialogue to shape a coherent national response to the 4thIndustrial Revolution in South Africa.

In his keynote address, Kiracofe shared predictions around the 4IR and how South Africans can respond, relying on the State of Tech 2019 – an annual report compiled by Startupbootcamp, the world’s largest network of multi-corporate backed accelerators, predicting the top strategic technology trends for the coming year. 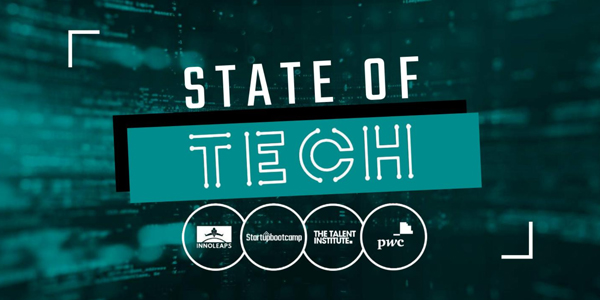 “The industrial robotics industry market will this year reach $135 billion globally; and there are already 25 000 collaborative robots, or cobots, working side-by-side with humans in factories around the world. By 2021 the virtual assistant market will be worth $16 billion.”

Kiracofe said robots are now such an integral part of our lives that the International Federation of Robotics has developed a new Key Performance Indicator (KPI) for “robot density”, measuring: the number of robots per 10 000 workers in a country or ecosystem:

“As AI gets more intelligent it is learning faster than we can anticipate and learning in ways we do not necessarily understand. The problem is that this can lead to AI making decisions that we no longer understand. One of the trends we are seeing is efforts now to design “explainable AI” into AI, asking: ‘Please help me understand how you came to that decision’.” 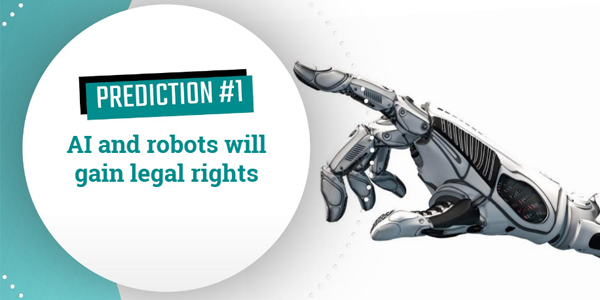 “We are now at that precedent where the AI is far beyond where we can anticipate and we are seeing that AI is making ethical decisions, therefor, our prediction for 2019 is that AI and robots will gain legal rights.”

Kiracofe said the European Parliament is already debating rules and regulations that relate to legal rights for AI and robots. One of the concerns, for example, is a Tesla self-driving car finding itself in a situation where it has to make an ethical choice between ‘do I protect the driver or do I protect a pedestrian’?

These kinds of decisions and the ethical and legal implications are being debated currently from a regulatory perspective and “we believe that by the end of this year we will begin to see those rights being formalized”, said Kiracofe.

From satellites to smart cities to smartphones, massive troves of data will be generated at a scale that has never dealt with. This will lead to new business models across sectors but worrying it also increases concerns around cybersecurity.

“Roughly one percent of the entire world’s GDP is being lost to cybercrime. In 2017 the damages from cybercrime was about $600 billion, and this is going to increase to close to $6 trillion by 2021,” the data in the report predicts.

Long gone are hackers in T-shirts in dark rooms. “We are now seeing cyber mercenaries and data mafias banding together in organised crime, as well as state actors employing cyberattacks that are much more professional and institutional,” said Kiracofe. “We are seeing cyber-units from state actors infiltrating into factories. In the hardware that is used by Amazon and Apple, and other large corporations, we are finding embedded chips that are smaller than a size of a pencil tip that are doing things that we do not yet know.”

He added that event the press release has become a weapon in our #FAKENEWS world. “Last year there was over a $100 million made in cyberattacks by individuals who benefitted through stock price movement as a result of fake press releases that were distributed through major news networks and PR wire services.” 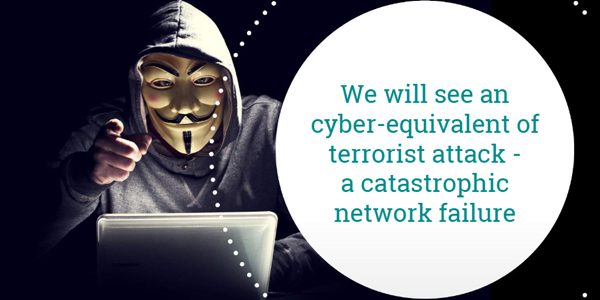 “Our prediction is the likelihood of Cyber 9/11 in the next 12 to 18 months. This cyberattack(s) on the scale of the 9/11 terrorist attacks, can lead to catastrophic failure in either infrastructure, or the banking sector, or national communications networks, or even crippling a region’s electricity grid,” he said.

Other predictions include moving to a sensor-based economy where not just the devices themselves become ambiguous but the data becomes so massive that and overwhelming that protecting everyone’s data now becomes an existential necessity.

“Where going to see that these sensors embedded in really in every aspect of our cities and our communities; and that these sensors are recording every element of life across the board. And that data-driven algorithms that make those decisions and determination are going to be far beyond what we as humans or at lease individuals can decide. There is going to have to be a collaborative relationship with AI that is helping us to do this,” Kiracofe said. 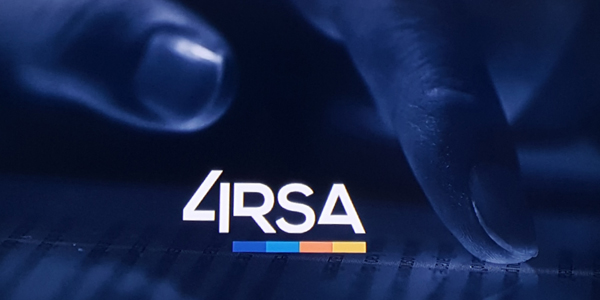 For the latest news on Wits University’s involvement in the #4IRSA Partnership visit http://www.wits.ac.za/future/; and for news from the #4IRSA alliance visit https://4irsa.org/.

About the #4IRSA Partnership

The Partnership for the 4th Industrial Revolution in South Africa (#4IRSA) is an alliance between Telkom and the Universities of the Witwatersrand, Johannesburg and Fort Hare, and the Department of Telecommunications and Postal Services (DTPS).

Its purpose is to stimulate and facilitate an inclusive national dialogue to shape a coherent national response to the 4thIndustrial Revolution in South Africa. It aims to complement and support other national activities relating to the 4IR, most notably the Presidential Commission on the 4IR.

The 4IRSA Partnership recognises that there are several 4IR-related processes and dialogues underway in South Africa: in government, industry, academia and society at large.

However, these are, in the main, fragmented, eclectic and divergent, and indeed there is a high level of unawareness of each other between these processes. The 4IRSA Partnership aims to provide a platform for all these processes and stimulate shared conversation, so that they become mutually visible, thereby facilitating progressive coherence between them, moving from fragmented divergence towards complementarity.

Following a host of workshops early in 2019, the next steps will be:

A Summit of Principles (SOP) is scheduled for later this year. This will include representatives of all of the above industries, related government departments, labour and other stakeholders. The objectives of the Summit of Principles are: to build alignment, participation and momentum for the 4IRSA process; share sector workshop outputs; agree on key areas for further research and deliberation; and agree on a framework for further action and the roadmap towards the Summit of Declarations.

The Summit of Declarations is anticipated to be held in the 4th quarter of 2019. The objective of the Summit of Declarations are: to consolidate all workstream reports into a comprehensive national response; for all stakeholders of each sector represented to table and commit to a short, medium and long term response by that sector to the 4th IR, in the form of a declaration for that sector; to agree monitoring and evaluation mechanisms; to agree further areas of dialogue and research.