Drawing on a piece of silcrete found in Blombos Cave in South Africa predates previous human-made drawings by at least 30 000 years. 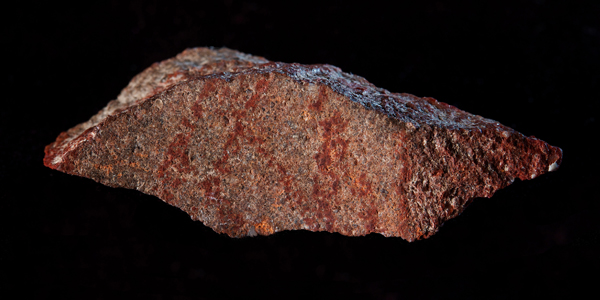 The earliest evidence of a drawing made by humans has been found in Blombos Cave in the southern Cape in South Africa.

The drawing, which consists of three red lines cross-hatched with six separate lines, was intentionally drawn on a smooth silcrete flake about 73 000 years ago. This predates previous drawing from Africa, Europe and Southeast Asia by at least 30 000 years.

The drawing on the silcrete flake was a surprising find by archaeologist Dr Luca Pollarolo, an honorary research fellow at the University of the Witwatersrand (Wits), while he painstakingly sifted through thousands of similar flakes that were excavated from Blombos Cave at the Wits University satellite laboratory in Cape Town. 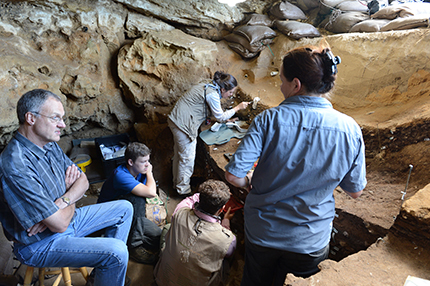 Henshilwood holds a Research Chair at the University of Witwatersrandin South Africa, and is the Director of a newly granted Centre of Excellence at the University of Bergen, Centre for Early Sapiens Behaviour (SapienCE). Van Niekerk is a Principal Investigator at SapienCE. The team’s findings on the 73 000-year-old drawing was published in the high impact journal, Nature, on 12 September.

Realising that the lines on the flake were unlike anything that the team had come across from the cave before, they set out to answer the questions it posed. Were these lines natural, or a part of the matrix of the rock? Were they, perhaps, made by humans living in Blombos Cave 73 000 years ago? If humans made the lines, how did they make them, and why?

Under the guidance of Professor Francesco d’Errico at the PACEAlab of the University of Bordeaux, France(the second author of the paper) the team examined and photographed the piece under a microscope to establish whether the lines were part of the stone or whether it was applied to it. To ensure their results, they also examined the piece by using RAMAN spectroscopy and an electron microscope. After confirming the lines were applied to the stone, the team experimented with various paint and drawing techniques and found that the drawings were made with an ochre crayon, with a tip of between 1 and 3 millimetres thick. Further, theabrupt termination of the lines at the edge of the flake also suggested that the pattern originally extended over a larger surface, and may have been more complex in its entirety.

“Before this discovery, Palaeolithic archaeologists have for a long time been convinced that unambiguous symbols first appeared when Homo sapiensentered Europe, about 40 000 years ago, and later replaced local Neanderthals,” says Henshilwood. “Recent archaeological discoveries in Africa, Europe and Asia, in which members of our team have often participated, support a much earlier emergence for the production and use of symbols.”

The earliest known engraving, a zig-zag pattern, incised on a fresh water shell from Trinil, Java, was found in layers dated to 540 000 years ago and a recent article has proposed that painted representations in three caves of the Iberian Peninsula were 64,000 years old and therefore produced by Neanderthals. This makes the drawing on the Blombos silcrete flake the oldest drawing by Homo sapiens ever found. 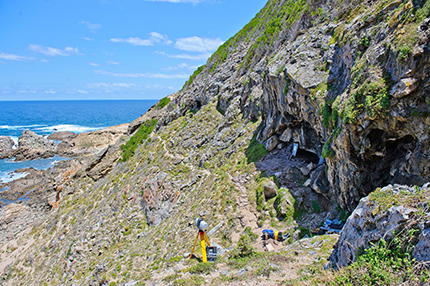 Although abstract and figurative representations are generally considered conclusive indicators of the use of symbols, assessing the symbolic dimension of the earliest possible graphisms is tricky.

Symbols are an inherent part of our humanity. They can be inscribed on our bodies in the form of tattoos and scarifications or cover them through the application of particular clothing, ornaments and the way we dress our hair.

Language, writing, mathematics, religion, laws could not possibly exist without the typically human capacity to master the creation and transmission of symbols and our ability to embody them in material culture. Substantial progress has been made in understanding how our brain perceives and processes different categories of symbols, but our knowledge on how and when symbols permanently permeated the culture of our ancestors is still imprecise and speculative.

The archaeological layer in which the Blombos drawing was found also yielded other indicators of symbolic thinking, such as shell beads covered with ochre, and, more importantly, pieces of ochres engraved with abstract patterns. Some of these engravings closely resemble the one drawn on the silcrete flake.

“This demonstrates that early Homo sapiensin the southern Cape used different techniques to produce similar signs on different media,” says Henshilwood. “This observation supports the hypothesis that these signs were symbolic in nature and represented an inherent aspect of the behaviourally modern world of these African Homo sapiens, the ancestors of all of us today.”