Hans Adler's wish in donating part of his collection of rare scores, models, albums and instruments, as his widow Gertrude Adler wrote "to inspire future generations of music students and lovers of music". 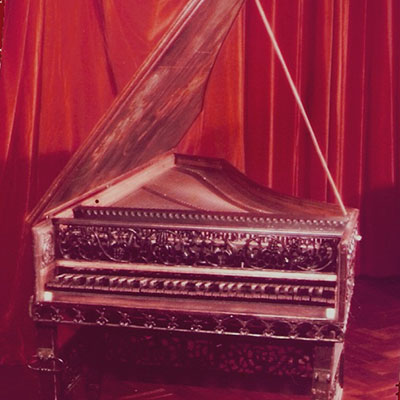 The dynamic Hans Adler made his Johannesburg home a centre for classical music ranging from his interests in incunabula and rare antiquje scores and instruments to the chamber works of post-war composers. Wits is proud to be home to part of that collection.

The plectrum, traditionally made from the hard quill of a carrion bird, is set in a tongue that fits into a jack…” The second-year music students absorb the detail and scribble notes about materials that could not be further from the industrial-era and digital age music-making that usually fills their day, “…the rose is purely aesthetic and finely cut from vellum”. As John Reid-Coulter, charged with maintaining the instruments, trips through the arcana of keyboard instrument construction the sheer alchemy of the harpsichord draws them into a world of sound from brass, ivory, spruce and poplar.

Hans Adler, who donated the Bertolotti harpsichord that is the object of scrutiny, would be very pleased. His wish in donating part of his collection of rare scores, models, albums and instruments, was, as his widow Gertrud Adler wrote “to inspire future generations of music students and lovers of music.” The dynamic Hans Adler made his Johannesburg home a centre for classical music ranging from his interests in incunabula and rare antique scores and instruments to the chamber works of post-war composers. Raised in a home filled with music, his mother had performed with Brahms and Tchaikovsky and his first piano teacher was a pupil of Clara Schumann, Hans Adler brought his love of music as a not so secret import with him when immigrating to South Africa in 1933.

He succeeded the legendary Percival R Kirby as chairman of the Johannesburg Musical Society and applied his business mind to channelling international musicians through Johannesburg to performances as far afield as Kenya and Mauritius. His tireless work drew leading figures to his events. In the collection donated to Wits is a letter from Gabon in which Dr Albert Schweitzer regrets that he is unable to visit. John Ogdon and Julian Dawson-Lyell both wrote short pieces dedicated to him, also part of the collection. His work as impresario culminated in the 1971 visit by Karlheinz Stockhausen.

In recognition of decades-long service to music, Wits conferred an honorary doctorate on Hans Adler in 1978. Following this he made his generous donation shortly before his passing in 1979. In terms of instruments alone the collection includes the Bertolotti and Landowska harpsichords, a seventeenth century two-manual Italian harpsichord, a rare clavicytherium (a vertical clavichord) and travelling piano form the nineteenth century, among others. The Wits Music Division continues to honour his memory and the spirit of broad-ranging musical interests by maintaining the collection and using it as a teaching tool to introduce aspects of historically informed performance practice and historical musicology.