The Bernard Price Institute (BPI) maintains a small museum of palaeontology in the Palaeosciences Building on the Braamfontein Campus East at Wits, depicting fossils from the main areas of palaeontological research in which the Institute specialises.

On 8 August 1998, the museum was formally named the James Kitching Gallery in honour of the half-century of dedicated and distinguished service to the University and to the science of Palaeontology by James W. Kitching.

Special features of the Museum include a live fossil preparation laboratory, where visitors can watch a technician preparing a fossil from the collections. The museum also features several life-size animated reconstructions of fossils, starring Fang and Fred.

Fang is a robotic reconstruction of the North African Cretaceous mini-tyrannosaur, Afrovenator abakensis; and Fred is a life-size reconstruction of a primitive tapinocephalid dinocephalian (early proto-mammal or mammal-like reptile ), from the basal Karoo, Tapinocaninus pamelae, discovered, named and described by the Institute's Director, Professor Bruce Rubidge.

Other notable specimens on display in the museum include the skull of one of the earliest known mammals from the Early Jurassic Elliot Formation of the north-eastern Free State Province, Megazostrodon; a growth series of the skulls of the common Early Triassic herbivorous dicynodont of the Middle Beaufort Group, Lystrosaurus; the huge skull of another dicynodont, Platycyclops, from the Late Permian Lower Beaufort Group; a magnificent skull and partial skeleton of the Early Jurassic prosauropod dinosaur, Massospondylus, from the Middle to Upper Elliot Formation; Australochelys, the earliest tortoise (turtle) from Africa, found in the early Jurassic Elliot Formation; and Proterosuchus, a distant ancestor of the dinosaurs, from the Middle Triassic Lystrosaurus Zone.

Also to be seen in the museum are examples of the large variety of exquisite fossil plants from the Karoo deposits in South Africa, and a selection of Plio-Pleistocene fossils from the Makapansgat cave deposits of Northern Province.

Fang and Fred are the nicknames of the BPI's two robotic prehistoric animals, constructed early in 1997 as an experiment in the creation of life-sized reconstructions of fossils and also in educational methods. 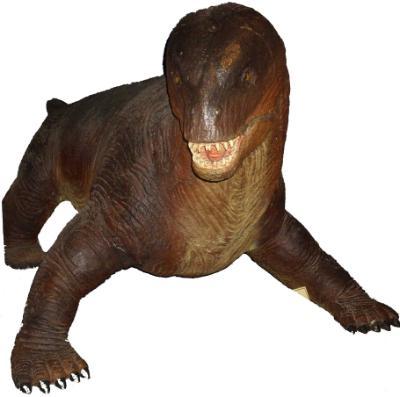 These two were chosen as the first attempts by the BPI in lifesize robotic reconstructions for the following reasons:

Fred is based on a recent important fossil discovery from South Africa, and is unique because:

It belongs to the group known as the therapsids, or mammal-like reptiles, which are important because they were ancestral to the mammals. Fred belongs to the therapsid group Dinocephalia - a name which means terrible heads. They date from the earliest time of therapsid evolution. The almost complete skeleton on which the reconstruction was based was found in the Karoo by the Director of the BPI, Professor Bruce Rubidge, lying alongside a second skeleton.

Fang is based on an African killer dinosaur unearthed in the Sahara in 1993 by a team of American palaeontologists from the University of Chicago. This type was selected because it is a classic toothy dinosaur that looks a lot like its relative, Tyrannosaurus rex - in other words, everybody's idea of a predatory dinosaur - and it presented an opportunity to drive home the point that North America was not the only home of dinosaurs like this. Fang represents a new species of carnivorous dinosaur that turns out to be a distant and older relative of the infamous T. rex, but a creature perhaps even more deadly because its smaller size and lesser mass meant that it could probably move with far greater speed.

What surprised many about this find was the extent to which this new animal from Africa resembled North American, rather than South American, dinosaurs. It suggested the possibility that a land bridge or shallow ford connected Africa and North America long after the breakup of the supercontinent, Pangea.

The construction methods of the two animals were rather different:

Fang started out as a welded metal frame over which sheets of wet-suit rubber (closed cell polyethylene foam sheets) were glued. A heated soldering iron was used to carve the skin texture, and layers of paint and transparent silicone rubber completed its complexion and cosmetics. Its robotic mechanism is driven by five 12-volt truck windscreen-wiper motors: he blinks and rolls his eyes, moves his head from side to side and up and down, opens and shuts his mouth, swings his tail, and breathes (his rib-cage heaves).

Fred on the other hand began as a plasticine scale model which was translated into a lifesize static model of sculpted polystyrene blocks which had been glued together. That was then moulded and a skin of silicone rubber was cast from the moulds to apply to a welded metal frame. Again, the movements are governed by truck windscreen-wiper motors, allowing Fred to move his head and jaws, and to breathe .The two models were unveiled at the first ever National Science Festival in Grahamstown, South Africa, in April 1997. To get the models from Johannesburg to Grahamstown - 1000 km apart - needed a good deal of help, and the Institute is particularly grateful to Frasers International Removals for their generous assistance.Since the National Science Festival, Fang and Fred have gone on to publicise palaeontology and the BPI in many press articles, radio inserts, and television features, and many live appearances at events of all kinds - including, appropriately enough, the Johannesburg premiere of the Steven Spielberg block-buster dinosaur movie, "The Lost World: Jurassic Park".

The Institute has an ongoing programme of reconstruction of other spectacular fossils which form such an unrecognised and unacknowledged part of South Africa s rich fossil heritage. They will all help to introduce this neglected part of the national heritage to more and more South Africans - young and old - in exciting and captivating ways. The year 1998 was the Year of Science and Technology in South Africa, and Fang, Fred and Friends more than played their part in making South Africans aware of this aspect of their national scientific heritage.