The apartheid system needs no introduction. It is rightly and obviously considered one of the worst crimes against humanity in world history. What has remained hidden, however, is the role of corporations in supporting the apartheid government. In the 1970s, it became clear that the government depended on the security forces to keep the system of apartheid in place, ruling through fear and violence. This violence sparked international outrage and led to the United Nations introducing arms sanctions against South Africa.

Despite these sanctions, the apartheid government was still able to procure weapons with the help of European banks, most notably Belgium’s Kredietbank and its subsidiary in Luxembourg. Together, these banks were responsible for facilitating up to 70% of all illegal transactions that allowed the apartheid government to continue to buy weapons, sustaining and strengthening apartheid. This contributed to the suffering of millions of people – those who lived under the apartheid system and those who are still affected by poverty and inequality.

Until now, these and other banks have escaped accountability any accountability for these crimes. CALS and our partners at Open Secrets are trying to address this by taking evidence of the banks’ historic economic crimes to international accountability frameworks, including the Organisation for Economic Co-operation and Development or ‘OECD’.

The OECD is one of the few international mechanisms available to hold businesses accountable for their role in human rights abuses. It has various contact points in member countries that are responsible for ensuring that multinational enterprises operating in their jurisdictions comply with the business operations and accountability standards set out in the OECD Guidelines. During Freedom Week in April 2018, Open Secrets and CALS laid a complaint against the banks with the Belgium and Luxembourg National Contact Points. As a courtesy, both banks were also served with a physical copy of the complaint.

The complaint asks the OECD to recommend that European authorities investigate the banks and that the banking community develop a mechanism to ensure financial institutions are not complicit in human rights violations as a result of their business activities going forward. The complaint received support through a submission from the United Nations Independent Expert on the effects of foreign debt and other related international financial obligations of States on the full enjoyment of all human rights, particularly economic, social and cultural rights.

Read the full text of the complaint here.

In June 2018, CALS and Open Secrets notified the Belgian national contact point of a serious conflict of interest within its decision-making structures. You can read more about it here. When the contact point dismissed our concerns, we later brought this to the attention of the Secretary General of the OECD, who was in agreement with our concerns and made suggestions for how to address them in line with the OECD's own Guidelines. The contact point did not engage with his suggestions either.

Despite a commitment from both national contact points that we would receive feedback on whether the complaint will be investigated within three months, we received no such feedback over one year later. We wrote to them in April 2019 demanding an answer. Find more information here.

At the end of June 2019, we received final decisions by both national contact points that they will not be investigating the banks. We have written to the Secretary General of the OECD in Paris again about the conduct of the contact points and their refusal to follow their own guidelines. We are committed
to holding the banks, and the OECD, accountable for their actions. More broadly, we will continue to
advocate for the redress of economic crimes in our work by incorporating what we have learnt
through this experience. 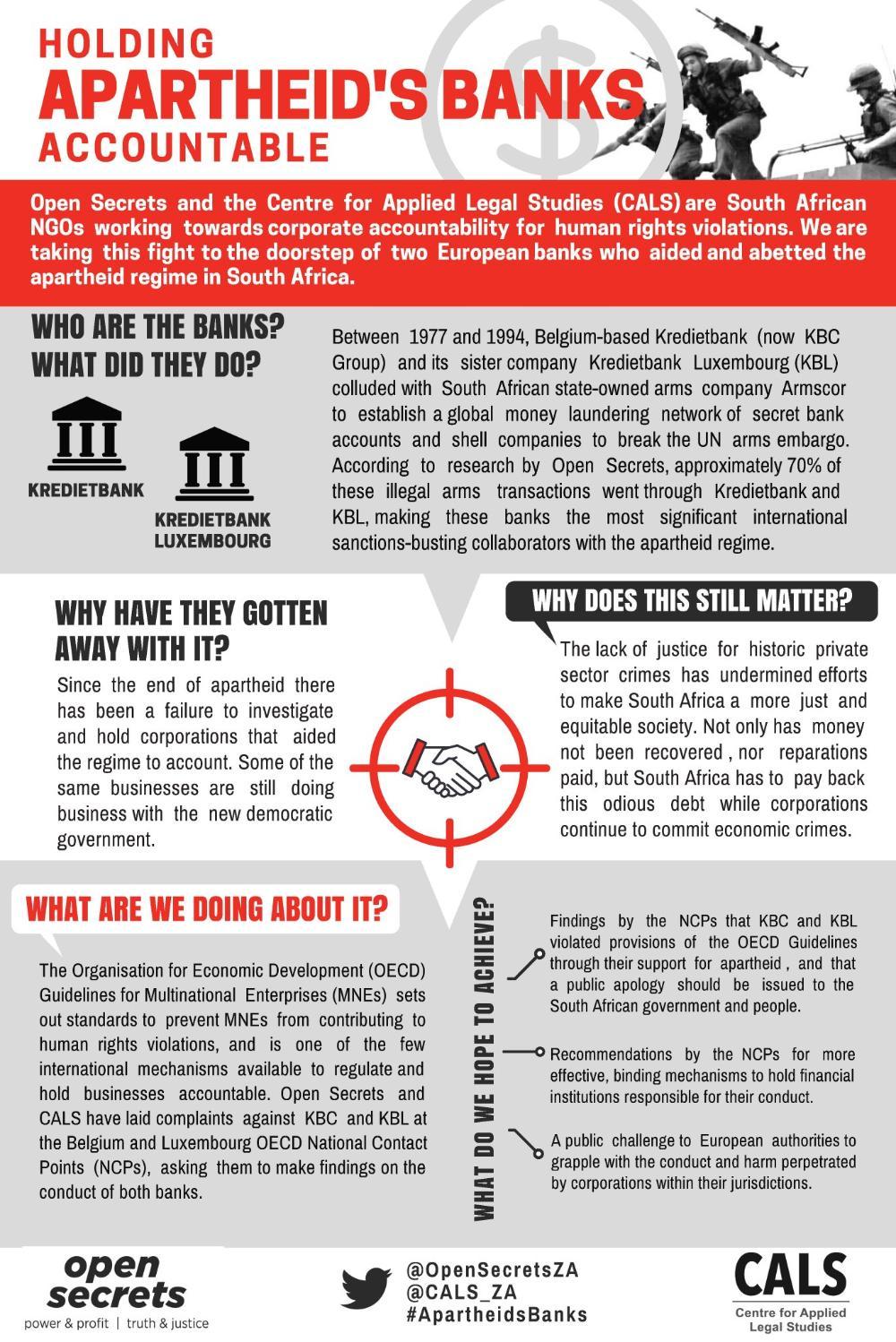 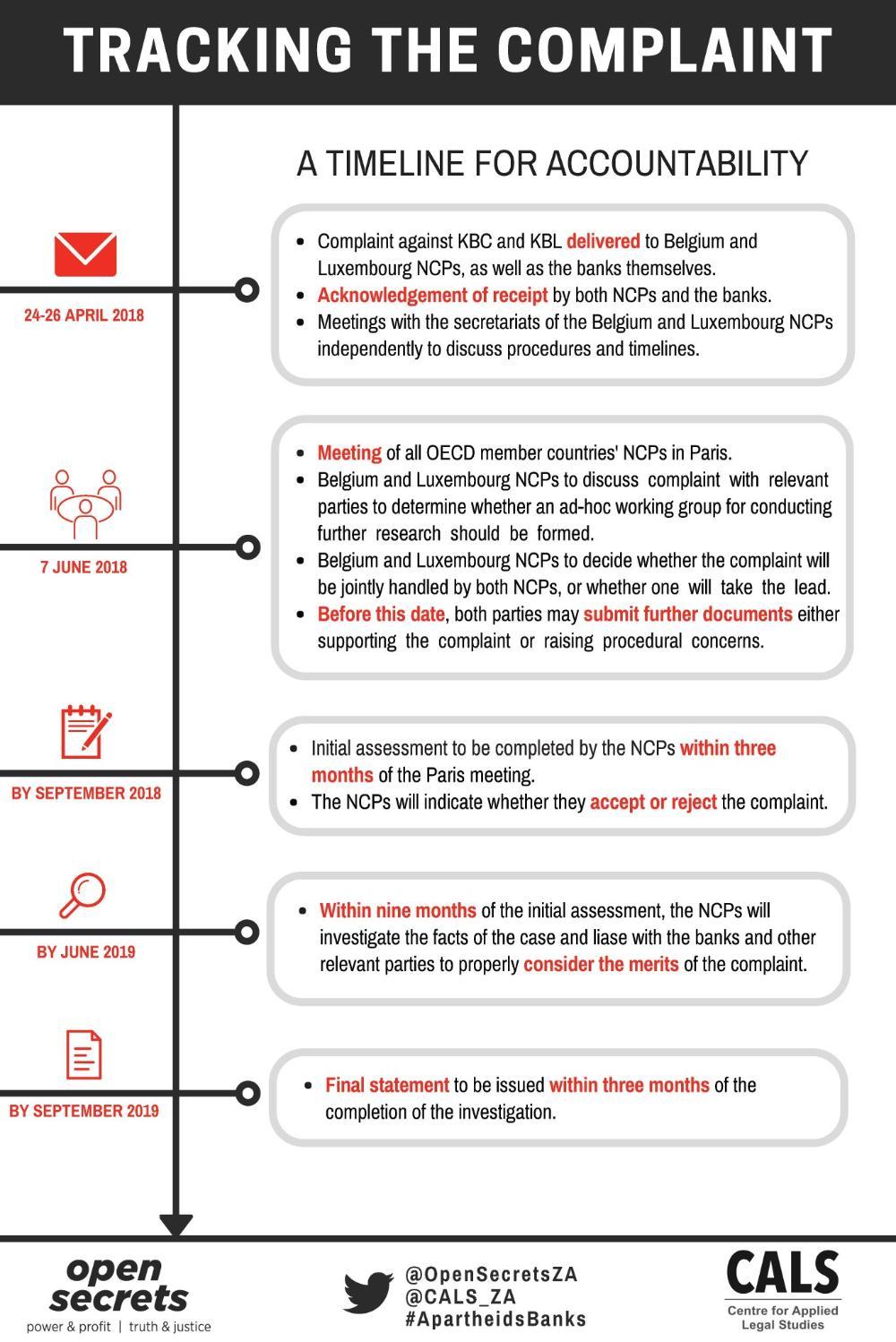