A new study by scientists at the University of the Witwatersrand suggests that at about 58,000 years ago, Stone Age humans began to settle down, staying in one area for longer periods. The research also provides a potential answer to a long-held mystery: why older, Howiesons Poort complex technological tradition in South Africa, suddenly disappear at that time.

Sibudu, a rock shelter near Tongaat in KwaZulu Natal, South Africa, has a long and diverse archaeological sequence.

The research paper by Dr Paloma de la Peña and Professor Lyn Wadley from the Evolutionary Studies Institute and the School of Geography, Archaeology and Environmental Studies at the University of the Witwatersrand in Johannesburg, South Africa, was published today, 5 October 2017, in PlosOne, and is titled: Technological variability at Sibudu Cave: The end of Howiesons Poort and reduced mobility strategies after 62,000 years ago.

De la Peña and Wadley explore the changes observed between an industry known as the Howiesons Poort (dated about 65,000 to 62,000 years ago at Sibudu) and the one that followed it at about 58,000 years ago.

The Howiesons Poort at Sibudu contains many finely-worked, crescent-shaped stone tools fashioned from long, thin blades made on dolerite, hornfels and, to a lesser extent, quartz. These ‘segments’, as they are called, were hafted to shafts or handles at a variety of angles using compound adhesives that sometimes included red ochre (an iron oxide).

A diverse bone tool kit in the Howiesons Poort includes what may be the world’s oldest bone arrowhead. Certainly a variety of hunting techniques was used perhaps including the first use of snares for the capture of small creatures. The animal remains brought to Sibudu reflect this diversity for there are bones from large plains game like zebra, tiny blue duiker, and even pigeons and small carnivores.

Soft, clayey ochre pieces were collected in the Howiesons Poort perhaps at a considerable distance From Sibudu. Clayey ochre is useful for applying as paint.

The beautiful Howiesons Poort industry with its long, thin blades is replaced at 58,000 years ago by a simple technology that could be rapidly produced. Coarse rocks like quartzite and sandstone became popular. These could be collected close to Sibudu. Post-Howiesons Poort tools were part of an unstandardized toolkit with triangular or irregularly-shaped flakes. Tiny scaled pieces were also produced using a bipolar technique (in the simplest terms this involves smashing a small piece of rock with a hammerstone).

There are many grindstones in Sibudu at 58,000 years ago, and these were used to grind ochre and/or bone. Ochre use also changed. Silty ochre found close to Sibudu was popular at 58,000 years ago and rather than suggesting tasks different from earlier ones, people may have wanted to collect raw materials close to their camp.

Various types of evidence suggest that by 58,000 years ago people stayed in Sibudu longer than before. There was considerable, rapid accumulation of sediments built up in millimetre-thick lenses from stacked layers of burnt sedge and grass bedding. Grass bedding gets infested with pests so people can either burn bedding to clean the camp or move out.

Environmental factors do not seem to have caused the time-related technological and site-formation changes that we have observed. We are inclined to favour social transformation as the reason. It is possible that changes in band size and/or membership of the group influenced decisions about whether to stay in Sibudu. We do not know whether group size was larger at 58,000 years ago than before, or whether small groups occupied the site for a long time. What we can say is that the people using the simple post-Howiesons Poort technology were ‘homebodies’ who preferred to collect the raw materials they needed from close to their camp. 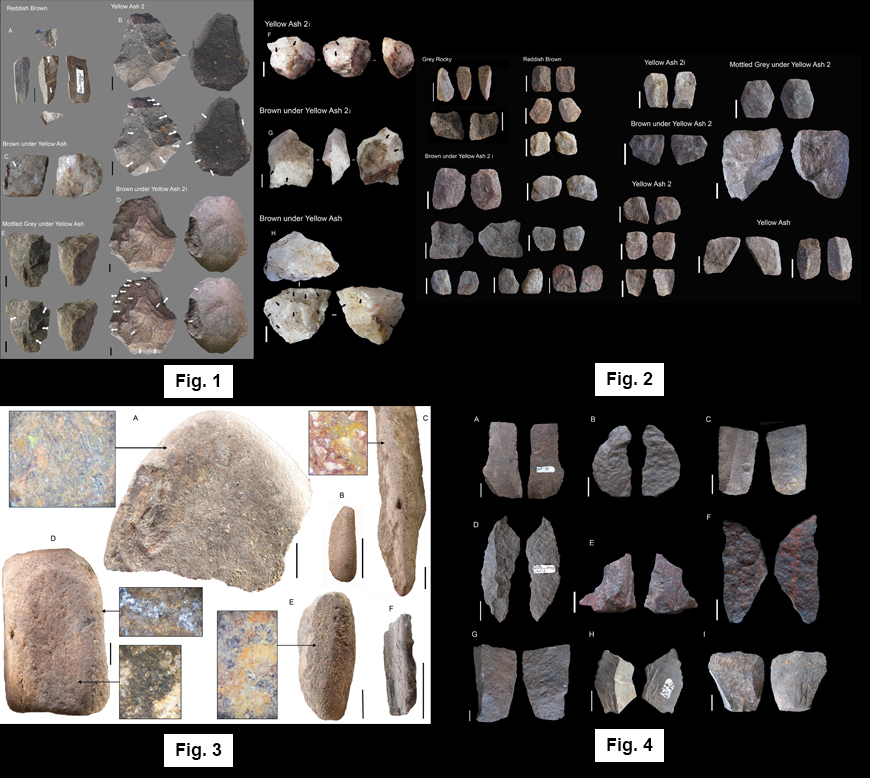