The making of Mandela in the media

From “dangerous” black anti-apartheid fighter to iconic leader hailed the world over, to bitter ex-husband and “sell out”. 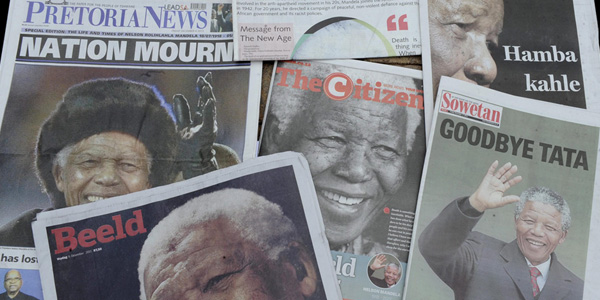 Dr Bob Wekesa in the Department of Journalism and Media Studies at Wits University answers questions about the various narratives and images of Mandela as portrayed by the media.

How was Nelson Mandela first portrayed in the media when he became president of democratic South Africa?

Mandela was portrayed heroically, reaching near-messianic heights when he became president in 1994. This was essentially the continuation of the framing of Mandela as a once-in-lifetime personality who endured 27 years in prison under the brutal apartheid regime but yet managed to navigate the country through difficult times. Media narratives framed the image of a personality who forged consensus by moderating extremist inclinations on the left in the black organisations, and extremist sentiments on the right representing white political organisations.

How did this portrayal change over the years?

When Mandela became president, managing the high expectations of citizens became a challenge. Many of the black citizens were looking forward to benefitting from the new South African economy where they had been previously excluded. While a number of media commentators retained the optimism that Mandela represented, some started talking of Mandela’s failure to put the material advancement of blacks at the heart of his policy transformation. His messy and very public divorce with his former wife, Winnie Madikizela-Mandela, tainted his messianic image. Soon, voices began to emerge critiquing Mandela for being overly focused on reconciliation to the detriment of social justice that blacks demanded. This tenor of criticism would go on to imply that Mandela had become a captive of the so-called “white monopoly capital”. It must, however, be pointed out that these voices remained in the minority with large demographics of the South African populace remaining grateful for the role that Mandela played.

Why did this portrayal change?

Essentially, the shift from expressly positive to a more mixed portrayal was a function of the economic hardships that endured for a significant portion of the South African population. This was further tarnished by the fact that South Africa remained one of the most unequal societies in the word with a tiny minority enjoying high levels of prosperity while the majority struggled to make ends meet. As hope for the transformation of livelihoods for the better were dashed, the blame was laid at Mandela’s feet by some of the opinion shapers. In some respects therefore, the media narratives were a function of the reporting on what we can refer to as “dreams deferred”.

Some negative sentiments arose regarding Mandela after his death. What do these reveal about his legacy?

The key issues that have led to negative sentiment which in turn lead to some form of a pessimistic portrayal of Mandela’s legacy are feelings of economic exclusion. This dented the positive portrayal of his legacy in the media specifically and the public. Of particular concern for those interested in maintaining a positive image of Mandela is the issue of land. It is thought that Mandela did not prosecute the historical dispossession of land from the blacks by the whites. This view goes that Mandela should have pursued the return of land in the hands of whites to blacks. However, Mandela’s legacy is based on his personal sacrifice and the delivery of a progressive constitution. As such, the resultant legacy is a mixed one: positive on the human rights front, negative on the economic rights front.

Which aspects of Mandela’s presidential legacy were not covered enough in the media?

I think Mandela’s leadership style during his presidency has not been afforded sufficient consideration. In contrast to his successors, Mandela delegated much more and strove for consensus. Secondly, the media could have given the compromises he made much more attention. Looking at past and present coverage of Mandela, one does not get an indepth understanding of the decisions he and his cabinet reached and why. In other words, media coverage was rather superficial, focusing on the outcomes of Mandela’s presidency but with little in the way of the behind the scenes dynamics.