20 years since South Africa's military intervention into Lesotho - an opportune moment to consider the Mandela's position on the use of military force.

In the winter of 1998, Lesotho was roiled by protests after a controversial election. Frustrated opposition parties, which won only a single parliamentary seat, accused the ruling Lesotho Congress for Democracy of fraud and rigging the vote. South Africa initially intervened diplomatically, by helping to set up a commission composed of legal experts from the region to evaluate the opposition’s claim of foul play. 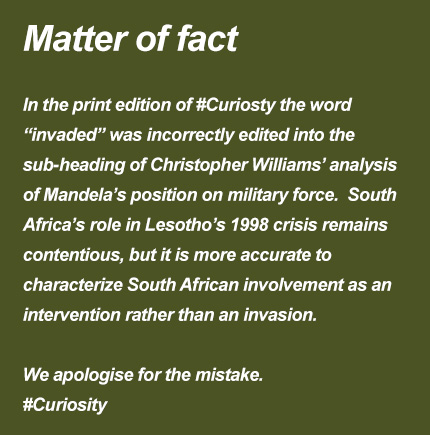 This commission failed to resolve Lesotho’s difficulties. The release of the commission’s report was delayed, prompting charges that it had been tampered with, and the report’s central finding (when it was finally released) was diffident: “We are unable to state that the invalidity of the elections has been conclusively established.”

This weak double negative only exacerbated disagreements between the competing parties. At the same time, Lesotho’s perennially restless military staged a mutiny and forced many of the army’s senior commanders to resign at gunpoint. The situation became anarchic—protestors prevented civil service employees from going to work and impounded government vehicles, while the military rank-and-file looked on and did nothing to protect a government it opposed.

Mandela later described the situation as a “virtual coup”. Lesotho’s government was paralysed and the country’s Prime Minister, Pakalithi Mosisili, feared that any day his administration would be toppled. Over the course of the crisis, he sent two desperate letters to Mandela and several other Southern African Development Community (SADC) heads of state, requesting a military intervention to stabilise Lesotho.

President Mandela was travelling in the United States while Lesotho degenerated into chaos. Deputy-President Mbeki was also away during this period, leaving Mangosuthu Buthelezi, the minister of Home Affairs, to deal with the crisis as Acting President.

Buthelezi gained approval to dispatch a SADC military force from regional allies in Gaborone, Harare and Maputo, as there was a growing norm throughout Africa that military coups would not be tolerated.

Mandela and Mbeki were also consulted, and, according to Buthelezi “supported military intervention, but acknowledged that the final decision lay on my shoulders”. On September 22, 1998, 600 members of the South African National Defense Force (that were later joined by 200 soldiers from Botswana as part of a SADC force) entered Lesotho to “stabilise the situation for the purposes of achieving a lasting political solution”.

The result was a bloody confrontation during which nine South African soldiers, 29 members of Lesotho’s military, and approximately 47 Basotho civilians were killed. Much of downtown Maseru was destroyed.

Despite this death and destruction, the military intervention prompted renewed discussions between the belligerent Basotho parties. This eventually resulted in the creation of the inclusive Independent Political Authority, which went on to propose revisions to Lesotho’s electoral system intended to avert future conflicts.

In Mandela’s final State of the Nation Address early in 1999 he claimed: “There is no doubt that SADC’s collective initiative succeeded in creating the space for this country’s political leaders to find a peaceful resolution of their differences”.

Criticisms of South Africa’s decision to intervene in Lesotho are legion, but very little of this literature focuses on Mandela. This is a mistake. As Mandela told reporters a few days after the intervention, he had had regularly consulted with Buthelezi during the crisis and therefore “It is wrong to suggest that Chief Buthelezi made a mistake. If there is an accusation that a mistake was made, then all of us are involved”. He quickly added, “But I am not in the slightest doubt that we have done the correct thing”.

Surprise at South Africa’s military intervention stemmed in part from an incorrect image of Mandela as a principled pacifist in the vein of Mahatma Gandhi or Martin Luther King Jr. Mandela, however, held very different views on the use of military force from these international icons. He was a pragmatist, not a peacenik. 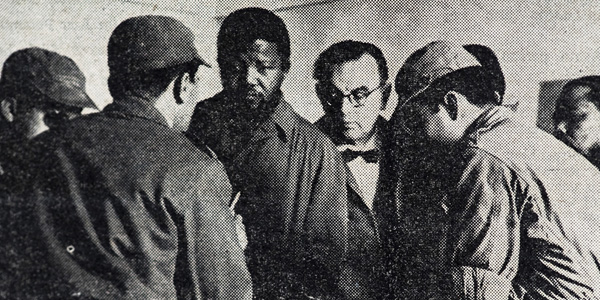 In the days after the intervention Mandela, was bombarded with questions about his country’s military mission. At one point he was asked to “reconcile the commitment to peace he kept in his battle to end apartheid with the military action in Lesotho”. Mandela replied: “It does not depend on ideology, it depends on an analysis of the situation”.

He stressed South Africa’s “belief is in peaceful solutions,” but then added, “Whether we’re going to continue with that policy indefinitely must depend on the reality on the ground”. Mandela said that South Africa had “tried peaceful means” to resolve the conflict in Lesotho. After those means were unsuccessful, “Only then did we use force”.

Despite his approval of military force in the case of Lesotho, Mandela believed such an approach had limited utility. He told reporters, “It is our belief that issues of this nature can’t be settled through military intervention … They need [a] political process, a political solution”. Military intervention, he said, was required “to ensure that there is peace and stability, so that the Basotho themselves can sit down and explore a political solution”.

Many commentators have failed to heed Cornell West’s warning: “Let us not make Nelson Mandela some kind of icon on a pedestal, belonging to a museum.” Fetishising Mandela exclusively as a man of peace marginalises him as a military strategist. Carl von Clausewitz, one of Mandela’s intellectual inspirations, emphasized thinking clearly about the relationship between end goals and the means needed to pursue them. This type of strategic thinking served Mandela well throughout the struggle for a democratic South Africa, and, at times, led him to advocate the use of force.

In October 1998, a month after the Lesotho intervention, Mandela began to draft a sequel to Long Walk to Freedom. Though he never completed the volume, his draft of the introductory chapter resides in the Mandela Centre for Memory. The introduction to this work provides insight into how Mandela understood the Lesotho crisis and conceived of the appropriate use of military force.

“The actual situation on the ground may justify the use of violence, which even good men and women may find it difficult to avoid. But even in such cases the use of force would be an exceptional measure, whose primary aim is to create the necessary environment for peaceful solutions.”