Facets of a legacy

Mandela recognised we live in a world that is, and not in a world we wish existed. To truly honour him we must be responsive to his entire political legacy.

The media trumpeted Madiba’s message of reconciliation, which was essential to his political character but not all that he stood for. Some newspapers valorised Madiba for his pragmatism, but he also stood for non-racialism, democracy and political participation. He fought for economic inclusion and abhorred poverty and inequality. He believed that before asking disadvantaged people to make sacrifices, wealthy people should do the same – he himself took a salary cut when he became South African President. 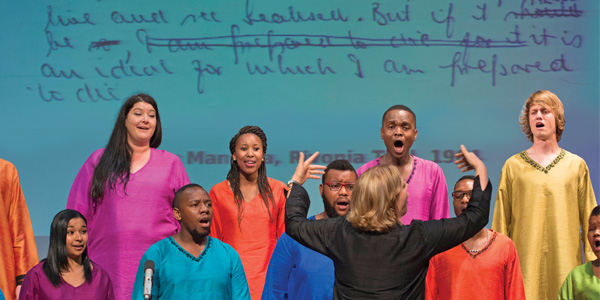 Truly honouring Madiba means being responsive to his entire political legacy and not just to the facets that one finds convenient.

World leaders who want to honour Madiba can only do so if they respect the rule of law and do not engage in extra judicial actions. Madiba was opposed to xenophobia in any form and honouring him means respecting his views in this regard. This means opposing pressures to turn away migrants, to incite violence and xenophobia, and to separate children from their families, even when it promises to ‘make America great again’.

The ANC and betrayal of the legacy

Many leaders in South Africa who claim to honour Madiba should remember that he opposed corruption and advocated service delivery and economic inclusion. These must become priorities in South Africa – but require that action be taken against the corrupt, even when they are close to political power. In all of these areas South Africa’s leaders (and Madiba’s comrades) have been found lacking. It took years for Jacob Zuma to be recalled and be held accountable for his role in ‘state capture’. He must still account for allegations of corruption in the arms deal, and for splurging on Nkandla, his lavish personal home renovated with just over R248 million of taxpayers’ money.

South Africa’s National Development Plan, the country’s signature policy initiative, focuses on poverty but ignores inequality. The plan assumes that reducing poverty and increasing employment will address inequality. These are necessary but insufficient. The last 20 years in China, India, South Africa and others is a story of an enormous reduction in poverty, yet inequality flourished in all of these societies. This is because those at the apex of society have assets (bonds, stocks, property), which those at the base do not have. When growth resumes in the economy, employment expands and livelihoods increase at the base of society. The assets of those at the apex grow faster, feeding inequality even as poverty is being reduced. The National Development Plan is silent about this, even though its commissioners were aware of it, but the political cost was too onerous to tackle. Finally, although the real cost of service delivery failure is borne by the poor (whom the ANC professes to represent), the ANC protects its cadres deployed to service delivery positions in a futile attempt to avoid being implicated in service delivery failure. In all of these acts, the ANC and its leaders betray Madiba’s legacy.

Corporate leaders often remark about the pragmatism of Madiba but they remain silent about his commitment to economic inclusion. They often highlight the fact that he abandoned nationalisation, and was president when a conservative macroeconomic programme, the Growth, Employment and Redistribution Strategy (GEAR) was implemented. Yet they conveniently ignore that Madiba saw this programme as a compromise born of political necessity. Madiba also bemoaned the implementation of GEAR and he was appalled at the increase in economic inequality and at the socio-political polarisation that ensued.

To truly honour Madiba requires corporate leaders to recognise all facets of his message. It requires them to make collective sacrifices to address economic inequality. This need not mean abandoning a market economy but, as in Europe and Asia, it does mean that such a market needs to be regulated. Furthermore, individual investment decisions should consider social costs. It also requires that corporate leaders be open to the prospect of regulating their remuneration. As Thomas Piketty remarks in his study, Capital in the Twenty-First Century, the excessive remuneration of corporate leaders is part of what drives inequality. If inequality were to be addressed, it would be mandatory for this remuneration to be subject to constraints.

A similar obligation is required of union leaders and activists in civil society. Too often, they speak of Madiba’s values – democracy, non-racialism, economic inclusion – yet they ignore his message of how to realise these goals. Madiba was an astute political entrepreneur who understood the importance of pragmatism in a struggle for equality. He recognised that we live in a world that is, and not in a world that we wish existed. Madiba recognised the importance of the realities of power, and the need to engage and sometimes compromise. However, he believed that such compromises must ultimately unleash initiatives that enable a breakthrough to realising a better world.

This is why union leaders and progressive civil society activists should not conduct debate in political extremes – Capitalism versus Socialism, nationalisation versus unregulated markets – these often serve as parameters of debate, as if these are the only options available. Rarely do progressive activists and leaders think through the structural reforms required to bridge the political divide that Achille Mbembe (Professor in the Wits Institute for Social and Economic Research – WiSER) described in 2012 as a South Africa “caught between an intractable present and an irrecoverable past; between things that are no longer and things that are not yet”.

Madiba’s legacy is a complex one. It behoves all of us not to cheapen it. If we truly want to honour him beyond the platitudes, then we must become responsive to his entire political message. This will give us our first shot at building the society envisioned in the Freedom Charter, which Madiba himself had a hand in creating 63 years ago.