The following excerpt from the book, “Dare Not Linger”, shows Mandela’s belief in education as the liberator of the human spirit.

In 1994, Nelson Mandela became the first president of democratic South Africa. Five years later, he stood down. During his tenure, he wrought a fully functioning democracy. Acclaimed author and Master’s student in Creative Writing at Wits, Mandla Langa, has completed the memoir that Mandela began before he completed his term of office. Here follows an excerpt from Langa’s book, Dare Not Linger: 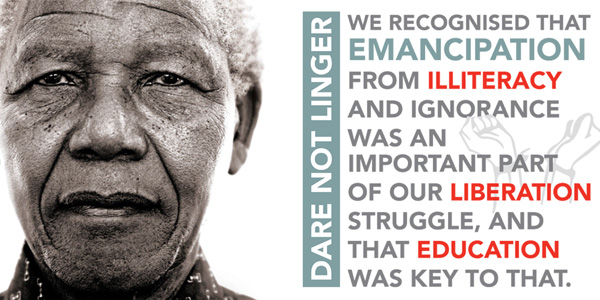 Mandela took a special and personal interest in the areas where the poorest of the poor are usually the most vulnerable – education and health. He worried in particular about the efficacy of the school-nutrition scheme, access to primary healthcare for pregnant women and children under six, and the building and upgrading of clinics and schools both by government and through partnerships he personally forged with private sector corporations.

Sensitive to the inequalities ravaging South African society, Mandela pursued his own personal mission. From the time he walked out of the gates of Victor Verster Prison in Paarl, on the afternoon of 11 February 1990, Mandela had sought to get the business community to have more empathy with the majority – and to encourage it to undertake targeted social-investment initiatives. While making these overtures, he was also aware of a counter-narrative operating in the media, which portrayed the new political players, especially MPs, as money-grubbing, and he did as much as he could to dispel that image.

Occasionally, however, such comments came from those he respected, and these were much harder to bear. For example, John Carlin, who had interviewed Mandela on numerous occasions, wrote a piece for the UK newspaper the Independent headlined ‘ANC Boards the Gravy Train: John Carlin in Johannesburg on the Underdogs Who Have Become Fat Cats in a Few Months’. In it he said that "Mandela promised in his election victory speech that the era of the fat cats was over, that the 'government of the people' would tolerate no more gravy trains. What he failed to anticipate was that the gap between government and people would widen after the dawn of democracy”. In the same report, Archbishop Desmond Tutu was quoted as saying that the new government had “stopped the gravy train only long enough to get on”.

Yet even before the ANC received such stinging criticisms from trusted friends and allies, Mandela had decided to donate one-third of his salary to promoting the cause of children’s rights. In a speech given in June 1994 to mark the anniversary of the Soweto Uprising, he said: “I am consulting with relevant individuals and bodies, for me to set up a Presidential Trust Fund, representative of people beyond the ANC and the mass democratic movement, to specifically deal with the problems of street children and detainees. I intend to make a contribution of R150 000 a year to this Fund, irrespective of the decision that Parliament will make about the salaries of elected representatives. Further details will be announced in due course.

“The Fund I have referred to will assist in alleviating these problems. But I do recognise, as all of you do, that a lasting solution lies in comprehensive socio-economic uplifting programmes. At the same time, the youth, especially from disadvantaged communities, need to realise that we cannot rely only on governmental programmes and charity. We also have to take initiatives in our communities to pool our meagre resources for projects such as bursaries and skills upgrading”.

The Presidential Trust Fund was to form the basis of the Nelson Mandela Children’s Fund, which became a vehicle not only for helping build partnerships with business leaders but also ensured that these partnerships were not dependent on state machinery and could thus produce swift results in areas of great need. Although the results were visible and impressive, Mandela acknowledged that they were no substitute for the mass provision of services by the state.

But he knew that South Africa’s destiny was irreversibly intertwined with its capacity to educate its people. Progress was reliant on it, and education had always been close to his heart. “The emancipation of people from poverty and deprivation is most centrally linked to the provision of education of quality,” Mandela said.

“While the poor and suffering masses of our people bore the weight of the liberation struggle, we acknowledge that we would not have advanced in the manner we did if it was not for the education that many of our leaders and cadres obtained. We recognised that emancipation from illiteracy and ignorance was an important part of our liberation struggle, and that education was key to that.

“It was for that same reason, for example, that one of the first things we set out to do when we were incarcerated on Robben Island prison, was to prepare for the education and further education of ourselves as inmates. Many political prisoners learnt to read and write for the first time on Robben Island. Many obtained degrees and further degrees on the Island. And the informal education through reading and discussion was probably the most significant part of our stay in that prison.

“One of the cruellest ways in which the apartheid system hit at our people was through the deliberate undermining of the quality of public education and the destruction of non-state education through, for example, the churches that sought to provide quality education”.