At the end of the Rainbow

Nelson Mandela embodied kaleidoscopic reconciliation in 1994, but what is the prism fracturing his legacy in 2018?

A stone’s throw away from Wits University in Braamfontein is a small art gallery that this winter exhibited an artwork featuring Nelson Mandela with arm raised in Nazi salute, superimposed on the flag of the Third Reich.

This was fiery artist Ayanda Mabulu’s statement on what he considers Mandela’s capitulation to white capital the moment that South Africa was being re-born as a democracy. It’s one person’s middle finger and artistic shock tactic, but it’s also a glimpse of the not-so-fringe factions that are angry, disappointed with the South Africa of 2018, and determined to slay dead-hero narratives.

Open season on the halo

Shortly after Mandela slipped into “belonging to the ages”, as former US president Barack Obama put it at Mandela’s memorial in December 2013, it signalled open season on Mandela’s halo.

Mabulu’s “black Nazi” rendition of Mandela is just the most recent recasting of Mandela. Economic Freedom Fighters (EFF) leader Julius Malema called Mandela a “sell-out”, before backpedalling and saying the “old man” made too many compromises. Former Zimbabwean president Robert Mugabe reportedly called Mandela “too much of a saint to white people” and when Winnie Madikizela-Mandela died earlier this year, some columnists and commentators didn’t fete her life for its extraordinariness in its own right, but did so by taking down her ex-husband Nelson Mandela by a few pegs first.

Populists have leveraged the power of rhetoric and muddied the “woke” agenda to call for necessary chaos and nihilism. The distraction of Twitter echo chambers and the noise of shallow ahistorical analysis has also become a deafening distraction.

At the same time, South Africa has arrived at the moment of Mandela Centenary celebrations with a resurgent invocation of the man for virtually every do-good cause. The contradictions and tension points of these divergent streams of thoughts raise the question of whether Mandela is a relevant guiding spirit for a South Africa of 2018, or if he’s a phantom, haunting the present with old missteps and compromises.

A legacy in purgatory

Professor Achille Mbembe of the Wits Institute for Social and Economic Research (WiSER) calls it “purgatory”, the limbo space Mandela’s legacy finds itself in as competing needs and agendas duke it out for prominence, five years after his death.

“They are not sending him to hell, but are putting him in purgatory and there are terrible years ahead still for Mandela’s legacy. This is the typical cycle of what happens in post-colonial societies,” he says.

Mbembe adds, “Those who are comfortable with the current situation hold onto a sanitised image of him. The younger generations still in search for radical transformation are keen to burn his memory because they need something that’s more threatening to the status quo, something insurrectionary, more directed to the present and the future than to the past.”Both narratives rely on a hyperbolic qualification of Mandela, Mbembe says, pointing out how exaggerations on both sides are simply not in tune with the historic figure that Mandela was.

“There is a facile critique of Mandela that is ridiculous. Its function is to cover our own cowardice.

“There should be nothing more we can ask of him, he’s given all that he had to give. We should take responsibility for ourselves, for our present and for our future, in memory of what he did for South Africa, Africa and the human race at large,” says Mbembe.

For him, to define Mandela’s legacy requires balance and historical context, in a country where deep inequalities grow deeper, fear and anxiety grips people, and technologies that are enabling in one way are, in another way, responsible for “democratising ignorance and stupidity”.

“The drama of our time is the drama of wilful ignorance, of nihilism masquerading as radicalism, of parochialism pretending to be wisdom or common sense. This is the cultural background against which the struggle over Mandela’s image and legacy is unfolding. Viscerality is threatening to replace reason in the public sphere.

We know that democracy cannot survive the loss of reason as a key means of exchange, communication and debate. If this trend is not properly arrested then we will end up seeing the very end of a reasoning public in favour of fake sentiments, passions and irrationality,” says Mbembe.

For Professor Noor Nieftagodien in the Society, Work and Development Institute (SWOP) at Wits and the History Workshop Research Group, the challenge to debating Mandela’s legacy for 2018 relevance requires the framing of Mandela within an historical lens, to better understand the many facets of the man. The debates about his legacy also have to do with our contemporary political struggles and anxieties. 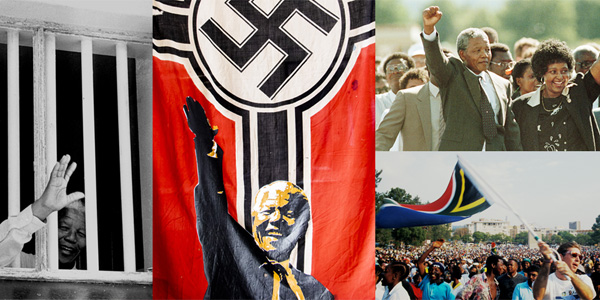 Writing in the Daily Maverick in 2014, author and former Ruth First fellow at Wits, Sisonke Msimang identified four Mandelas: the unapologetic radical; the principled pragmatist; the teddy bear grandfather; and the strident social justice activist. She posed the question of whether Mandela’s decision to “prioritise forgiveness and reconciliation over justice and redistribution in 1994 was a wise one”, especially as racist incidents continue unabated and capital, opportunity and access remain out of reach for the majority of black people. She answered her own question in the piece with the historical framing of which Nieftagodien speaks.

“It was clear that he [Mandela] was a man who responded sensitively and astutely to the contexts with which he was confronted. So the trait that bound those four personas was Mandela’s ability to make the right decision at the right moment,” writes Msimang.

Nieftagodien says, “In the early 1990s the task ahead seemed simpler and more straight-forward because most parties agreed the main task was to end apartheid and inaugurate a democratic order.”

Nieftagodien adds that the ANC and Mandela were aware of the deficiencies in the negotiated settlement. Mandela, it could be argued, took a pragmatic approach, focusing on the key objective of slaying the dragon of apartheid. It was hoped (perhaps naïvely) that, having political power, the new ruling party would be able to overcome the multiple problems bequeathed by apartheid. The likes of the Constitution, the Truth and Reconciliation Commission processes and even Archbishop Desmond Tutu’s declaration of South Africa as “The Rainbow Nation” would fill in the gaps in that honeymoon period of a “New” South Africa.

Now, nearly a quarter of a century later, many promises have remained pie-in-the-sky for too many people. The realities are that there is deepening poverty that still affects the majority of black people, high unemployment, gender inequality, the unresolved land issue, racism and even the continued destruction of the environment.

“It’s easy for Mandela to become the embodiment now of people’s frustration, but people need to remember that Mandela did not create these problems by himself, nor did he make these decisions by himself,” says Nieftagodien.

He thinks, though, that it is healthy for South Africans to debate Mandela’s legacy, to have vociferous disagreements and deeper interrogation. For Nieftagodien, it’s at the heart of understanding what kind of a South Africa we want to build and the kind of South Africans we want to be.

Like Mbembe, Nieftagodien says new rules of engagement need to apply. Sensationalism and political point scoring that polarise the debate into “saint” or “sell-out” camps he considers cheap shots and narrow agenda-setting. It’s a dangerous distraction to the bigger issue of fixing South Africa’s problems.

“Moving forward we should be looking at the heart of the deep structural problems of society and about the policies and the collective decisions that will guide South Africa now,” he says.

Professor William Gumede from the Wits School of Governance, however, thinks that the “Mandela Effect” shouldn’t be written off as sentimental cheerleading for the memory of a dead man.

Gumede says Mandela’s ability to inspire and the fact that he exited office untainted represents a gold standard for leadership that endures. It’s a worthy reminder in an era where leadership, vision and innovation are seemingly in short supply.

South Africans won’t easily forget the images of Mandela being sworn in as the first democratic president; the Madiba jive, or the time he donned the number 6 Springbok jersey and walked into the Ellis Park rugby stadium. They won’t easily forget how it made them feel.

Gumede says being able to invoke the mythology of Madiba Magic gets people to do better in their own spheres and to reflect on duty, sacrifice and action – especially in a fast world of clicktivism, hashtag glut and selfie overload.

“Maybe the next phase for South Africa is not about the big, glamorous plans for growth and development but about just getting government to work and getting better leaders.

We haven’t taken education seriously in this country post-1994; our education system has got weaker. Prior to 1994 we had a lot more education outside the school system, within our communities, but after 1994 many Black people who had an education or opportunity moved out of the townships. As a result, today there’s much more segregation between whites and blacks and blacks and other blacks. And it’s along these lines that Mandela’s legacy has been polarised,” he says.

Madiba Magic has the power to unify and reconcile. It’s why people put his beaming image on a T-shirt, knit a blanket, or give 67 minutes of their time each year in his memory to a good cause.

“That was part of Mandela’s legacy – he could be many things to many people,” says Gumede.

And from the small magic Gumede points to what he considers Mandela’s ultimate living legacy: South Africa’s constitutional dispensation.

In reviewing Mandela’s writings and speeches from the 1940s onwards it was clear, Gumede says, that Mandela was talking about democracy, not just freedom, even as the shackles of colonialism were firmly in place. That’s exceptional, he notes.

The gift of a constitutional dispensation is what defends the artist Mabulu’s right to paint exactly what he likes, and it’s what defends his detractors’ rights, too, to declare that they hate it.