A country for all its citizens

After 65 years of friendship, Bizos knew Mandela intimately and worked with him closely. His friend, says Bizos, was committed to creating a better country for ALL its citizens. 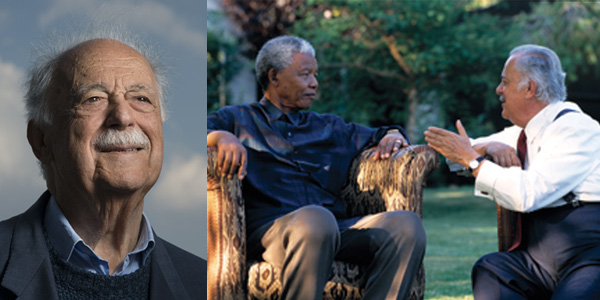 I met Nelson Mandela when I was in my first year at Wits University. The students were all called to a meeting, where we were informed that someone had complained to the government that there were black students sharing benches, and even walking around with white girls at Wits. But it was okay, the chairman of the meeting told us. It was all sorted out. The government had been told that it was just a “small group of leftists” that behaved so badly.

At the time, I was four years older than all the other first year students, as I had missed a couple of years of school when I first came into South Africa as a refugee. I don’t know what had gotten in to me, but I put up my hand and said: “If it means fighting for equality for all of our fellow students, then I am a leftist, and proud of it.”

The next day, the Afrikaans newspaper, the Transvaler, ran the headline: Linksgesind, en trots daarop! (Leftist, and proud of it!), for their front page lead story. My name was mentioned in the article.

Days later, I got a message that another Wits student wanted to meet me. His name was Nelson Mandela. I met him. We became friends.

In the 65 years that I’ve been friends with Nelson Mandela, I represented him twice – in the Treason trial, and in the Rivonia Trial. It was I that convinced him not to end his six-hour speech in the latter stages of the trial with the words “I am willing to die”. At least, I pleaded, add the words “… if needs be”, which he did.

We had grown close, Nelson and I. While in prison, we kept in constant contact. Nelson had asked me to look after his children while he was locked up, and I ran some errands for him. There were no secrets between Nelson and I, and, when he was released in 1992, the bond between us became even stronger. Never did we think we might fail. Never did we think we will not get to live in the South Africa that we were fighting for. A South Africa that belongs to ALL South Africans.

At a rally in Soweto, two days after Nelson’s release, I was sitting with Arthur Chaskalson, who later became Chief Justice. We heard Cyril Ramaphosa’s voice over the sound system, calling for Arthur and me. Nelson wanted to see us.

When we walked up to him, Nelson said that he wanted us to join him.

“You want us to carry an ANC card?” we asked him.

“I don’t want your R12,” he replied, referring to the cost of an ANC membership. “I want you to write the Constitution”.

It took us four years to write the Constitution. We went all over the world to do research to write the foundation on which this democracy is founded. It didn’t just come willy-nilly. It was a strenuous process that involved a lot of considerations, careful wording and consultation with the best legal minds South Africa – and the world – had to offer.

It is because of my commitment to this supreme law of the country that I refuse to resign. I am an old man of more than 90 years old. But my work is not done.

During apartheid, a large number of people were killed by the Security Police. When the cases got to court, a lot of them were thrown out with a judgement that there was “no one to blame”. My colleagues and I at the Legal Resources Centre have just recently successfully overturned a judgement on Ahmed Timol, who was tortured and thrown from the 10th floor of the then John Vorster Square building in Johannesburg. There are 60 other cases like this. Until their judgements are reversed, I will not rest.

It hurts deeply when people come up to me and say that Nelson Mandela was a sell-out. I reply by pointing them to the Freedom Charter. It starts with these words:

“We, the People of South Africa, declare for all our country and the world to know: that South Africa belongs to all who live in it, black and white, and that no government can justly claim authority unless it is based on the will of all the people.”

The Freedom Charter was written, literally, by the people of South Africa. Ordinary people, like you and me. It was adopted by over 3 000 delegates in Kliptown in 1955. While Nelson was present at the Congress of the People, he was not actively involved in the writing of this great document, nor in its adoption, as he was banned, and had to hide on the outskirts to witness the event.

Yes, Nelson Mandela was a great man – one of the greatest that the world has ever seen. He made unprecedented sacrifices to this country that he loved dearly. But Nelson never acted on his own. With every careful decision that he made – even when offered a deal to be released from prison – he first consulted with his colleagues, and the leadership of the ANC. The liberation of this country was never a one-man operation, and every decision made – whether right or wrong – was made for the benefit of all and especially for the future of this country.

So, to those who say Nelson was a sell-out, I say you are in a minority and you don’t know what you are talking about.

I am George Bizos. I am a refugee, and I am a friend of Nelson Mandela.