The Wits Choir in association with Wits Theatre presents the Wits Choir’s Africa Month Celebration Concert that will be a feast of songs from our continent.

The concert will include songs from Tanzania, Ghana, Mali, Kenya, Namibia and other African countries and unsurprisingly, many from South Africa. This concert will give audiences a preview of what the Choir will be presenting on their tour to France and Germany later this year.

Wits Choir will premiere a number of songs at their African Month Celebration Concert. One such work is a composition that was commissioned for Wits Choir by Samro Endowment for the National Arts . Composed by Mokale Koapeng, a well-known composer, the song is called Thloko ya me, Thloko ya gagwe. Another song arranged by South African composer Eduard Bosman which will be premiered is God is hier teenwoordig. Other songs include some Wits Choir ‘oldies' like Malaika and Ntyilo, Ntyilo, Je Wajua Yesu anipenda and S'khandamayeza!

The Young Wits Choir will also make their appearance to sing several combined items with Wits Choir. This younger sibling of the 55 year-old Wits Choir was established in 2013 and is a wonderful addition to the Wits Choir family.

The Choirs, whose diverse membership is drawn from a multitude of cultures, nationalities, occupations and ages, understands the value of hard work and discipline. The Choir is indisputably dedicated to the advancement of a spirit of reconciliation and transformation in South Africa. Through the example they set, choir members serve as ambassadors of Wits University and South Africa both at home and when abroad.

A SHORT HISTORY OF WITS CHOIR

Wits Choir is now in its 55th year of existence. It was originally called The Witwatersrand University Choir and was founded by students from two diverse student bodies.

The first was The University Choral Society and they decided to use the profits from their 1961 production of Oklahoma to buy choral music and start a choir.

On the other hand, at the same time, a group of students on the Students' Engineering Council also decided to form a choir. Towards the end of that year the two groups combined and the Wits Choir was formed.

Wits Choir is vibrant, young, and colourful. Membership is open to all, resulting in a fully representative choir drawn from diverse national and international cultures.

The Wits Choir motto is ‘Excellence through diversity' and this manifests itself in everything the Choir does, be it repertoire, membership of the choir, performances.

An example of this diversity is the fact that Wits Choir has sung for over 20 Heads of State both in Africa and abroad, and also at the opening of a sewage plant in Mpumalanga.

During the last 21 years of the newly-constituted Wits Choir there have been many highlights:

The Wits Choirs bring the music of South Africa and of our continent to audiences everywhere. The Choirs aim to show the beauty, intricacies, diversity and complexity of the music in the world. 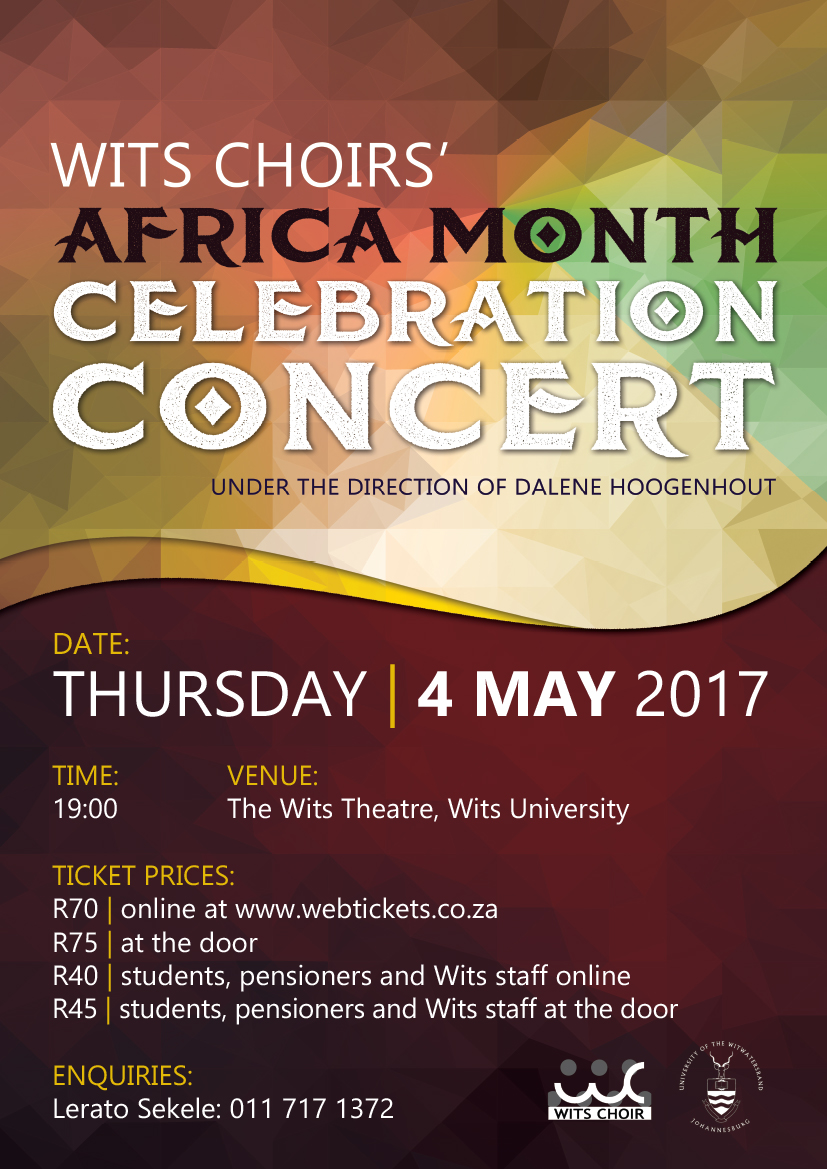