An illegal failure of our criminal justice system

Hate crimes such as the so-called “corrective rape” of lesbians and trans women is a black mark against SA’s constitutional democracy.

In 2021, there were 16 known LGBTQIA+ murders in South Africa. This was mostly against black lesbians and those who identify as transsexual. This is in a country with a rock solid and clear Constitution: no matter your sex or gender, you are protected from discrimination and have equal rights.

“It particularly fails those who don’t have access to resources and who can’t really afford lawyers. Therefore, they have to rely on the state for justice,” says Harie.

Wits Journalism Lecturer, Dr Nechama Brodie who authored a book on femicide in South Africa spanning 40 years, explains that the growth in hate crimes was experienced by all members of the LGBTQIA+ community, with transgender individuals experiencing higher levels of violence, as a group, than lesbians or gay men.

The state has a poor record of dealing with hate crimes. “Hate crimes against queer people get throttled by the overburdened court system,” says Dr Nolwazi Mkhwanazi, a medical anthropologist formerly with the Wits Institute for Social and Economic Research.

Added to this, a national task team set up by the Department of Justice and Constitutional Development to coordinate the various government offices and private organisations to deal with hate crimes, has fallen by the wayside.

“I don’t know what it is – is it corruption? The patriarchal society in which we live? It needs to be looked at because as people we should all be treated the same,” says Mkhwanazi. 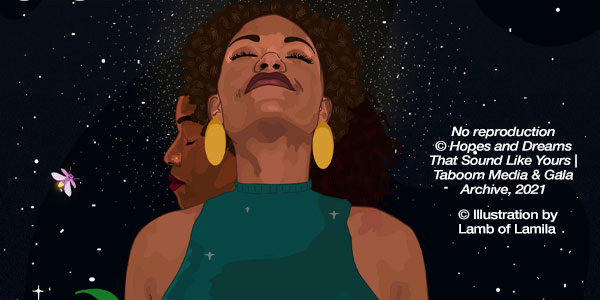 Hopes and Dreams that Sound Like Yours: Stories of Queer Activism in Sub-Saharan Africa. © Taboom Media & GALA Queer Archive, 2021 | Illustration by Lamb of Lemila

Indeed, homophobia is entrenched and sexual violence a popular weapon, notes Brodie. “Jackrolling", for example, "involves men targeting black lesbian women to ‘teach them how to be proper women’.

Jackrolling became curative [with] corrective rape [and] the underlying belief that women would somehow be cured from their homosexuality.” Jackrolling is a term that has been around since the 1980s, suggesting its long and prevailing history.

Dr Clare Harvey, a Senior Lecturer in the Department of Psychology at Wits University, explains that foregrounding the image of the black lesbian woman as an inevitable victim of grotesque crimes “blackwashes” homophobia.

Blackwashing refuses to acknowledge the structural inequalities that persist and perpetuates colonial and white supremacist tropes of black people as inherently violent.

Lesbian women must not be seen as singular and unidimensional. “Critically, constructions of rape as ‘corrective’ serve only to remove agency from the target of the crime, bolstering mythical discourses of homosexuality as ‘unnatural’… In many ways, these discursive mechanisms are problematic; primarily because they normalise violence and hatred as acceptable parts of identifying as a lesbian in township spaces,” says Harvey.

Harvey demonstrates the complexity of queer lives through the example of the Rainbow Girls – a documentary photographic project by Julia Gunther. Some of Gunther’s work shows the Miss Lesbian competition in Khayelitsha township, Cape Town. The photographs reveal unflinching defiance and the women’s refusal to accept the repressive attitudes that marginalise them.

The GALA Queer Archive based at Wits University houses a remarkable permanent photographic collection, entitled Kewpie: Daughter of District Six. This too shows the diversity, fluidity and multiplicity of the life of famous District Six drag queen, Kewpie.

Harie says, “Most of the photographs in the collection were taken by Kewpie and friends, and show Kewpie’s extensive social life and social circle, both in District Six and further afield. The photographs depict the carefully crafted public personas of the drag queens, and also their private ‘off-duty’ lives.”

Harvey adds that these kinds of subversive acts of creativity and boldness “allude to the fullness of queer people’s identities; they are constructed as plural, intricate and dynamic, with possibilities for pleasure, joy, freedom, power, resilience and agency.”