A child of darkness

An international team of researchers, led by Professor Lee Berger from Wits University, has revealed the first partial skull of a Homo naledi child that was found in the remote depths of the Rising Star Cave in the Cradle of Humankind World Heritage Site near Johannesburg, South Africa.

Describing the skull and its context in two separate papers in the Open Access journal, PaleoAnthropology, the team of 21 researchers from Wits University and thirteen other universities announced the discovery of parts of the skull and teeth of the child that died almost 250,000 years ago when it was approximately four to six years old.

[Download media pack to read the journal papers, watch interviews and see all the photos]

The child was found in an extremely remote passage of the Rising Star Cave System, some 12 meters beyond the Dinaledi Chamber, the original site of discovery of the first Homo naledi remains that were revealed to the world in 2015.

“Homo naledi remains one of the most enigmatic ancient human relatives ever discovered,” says Professor Lee Berger, project leader and Director of the Centre for Exploration of the Deep Human Journey at Wits University and an Explorer at Large for the National Geographic Society. “It is clearly a primitive species, existing at a time when previously we thought only modern humans were in Africa. Its very presence at that time and in this place complexifies our understanding of who did what first concerning the invention of complex stone tool cultures and even ritual practices."

Almost 2000 individual fragments of more than two dozen individuals at all life stages of Homo naledi have been recovered since the Rising Star cave system was discovered in 2013.

“This makes this the richest site for fossil hominins on the continent of Africa and makes naledi one of the best-known ancient hominin species ever discovered,” says Professor John Hawks, a biological anthropologist and lead author of a previous study on the fossil skeleton of a male naledi nicknamed “Neo” that was also found at the Rising Star cave. 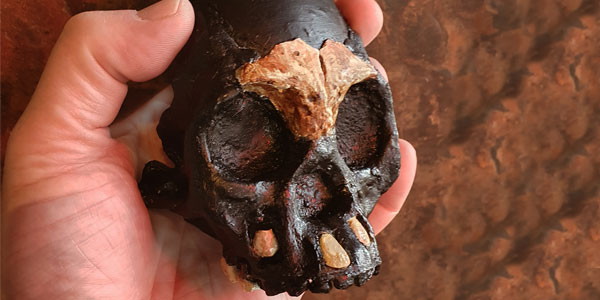 The skull of the child presented in the current study was recovered during further work in the cramped spaces of the cave in 2017. The child’s skull was found alone, and no remains of its body have been recovered.

The team have named the child “Leti” (pronounced Let-e) after the Setswana word “letimela” meaning “the lost one”. Leti’s skull consists of 28 skull fragments and six teeth and when reconstructed shows the frontal orbits, and top of the skull with some dentition.

“There were no replicating parts as we pieced the skull back together and many of the fragments refit, indicating they all came from one individual child,” says Dr Darryl de Ruiter, a palaeoanthropologist who previously led a study of the adult skull of Homo naledi and who is a co-author on the paper.

“This is the first partial skull of a child of Homo naledi yet recovered and this begins to give us insight into all stages of life of this remarkable species,” says Professor Juliet Brophy, who led the study on Leti’s skull and dentition.

The discovery of a hominin child skull is an extremely rare find in the fossil record as juvenile remains tend to be thin and extremely fragile. “Having skull remains associated with teeth of the same individual is extremely important for understanding the growth and development of this species,” says Christopher Walker, an expert in growth and development.

Leti’s brain size is estimated at around 480 to 610 cubic centimetres. “This would have been around 90% to 95% of its adult brain capacity,” says Dr Debra Bolter, co-author on the paper and a specialist in growth and development. “The size of Leti’s brain makes it very comparable to adult members if the species found so far,” says Bolter. 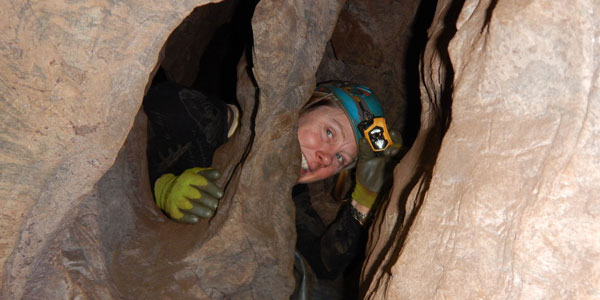 It has yet to be established how old Leti’s remains are. However, since other fossils of Homo naledi were found in the nearby Dinaledi Chamber and dated to between 335 and 241 thousand years ago, Tebogo Makhubela, part of the geological team investigating the discovery believes that it is likely that Leti is from a similar period, based on preservation and proximity.

Leti’s remains were discovered in a tight passage that measures only 15 centimetres wide and 80 centimetres long and was located just beyond an area named the “Chaos Chamber”.

“The area where Leti was found is part of a spiderweb of cramped passages,” says Maropeng Ramalepa, a member of the exploration team responsible for bringing the remains to the surface.

Dr Marina Elliott, one of the original “Underground Astronauts” in the first Rising Star expedition that originally uncovered Homo naledi and the leader of the excavation team that recovered Leti described the challenge of excavating Leti as “very difficult”. “This was one of the more challenging sites with hominin fossils we have had to get to in the Rising Star system,” says Elliott.

Since its discovery the Rising Star cave system has become one of the most prolific sites of discovery for hominin fossils in the world. Berger says that work is continuing throughout the cave system and that soon new discoveries are likely to shed further light on whether these chambers and passages are in fact a burial ground of Homo naledi, as the team originally hypothesised.

“I do not believe there is another site quite like Rising Star,” says Professor Steve Churchill, a palaeoanthropologist and co-author on both papers. “This is now the third locality we have described from this system with naledi remains, and we know through exploration that there are other localities.”

With no signs of carnivore damage or damage made by scavenging, and no evidence of the skull having been washed into the narrow passage, the team does not know how Leti’s skull came to rest, alone, in such a remote and inaccessible part of the system. The authors hypothesise that it is likely other members of its species were involved in the skull reaching such a difficult place.

“The discovery of a single skull of a child, in such a remote location within the cave system adds mystery as to how these many remains came to be in these remote, dark spaces of the Rising Star Cave system,” says Berger. “It is just another riddle among many that surround this fascinating extinct human relative.” 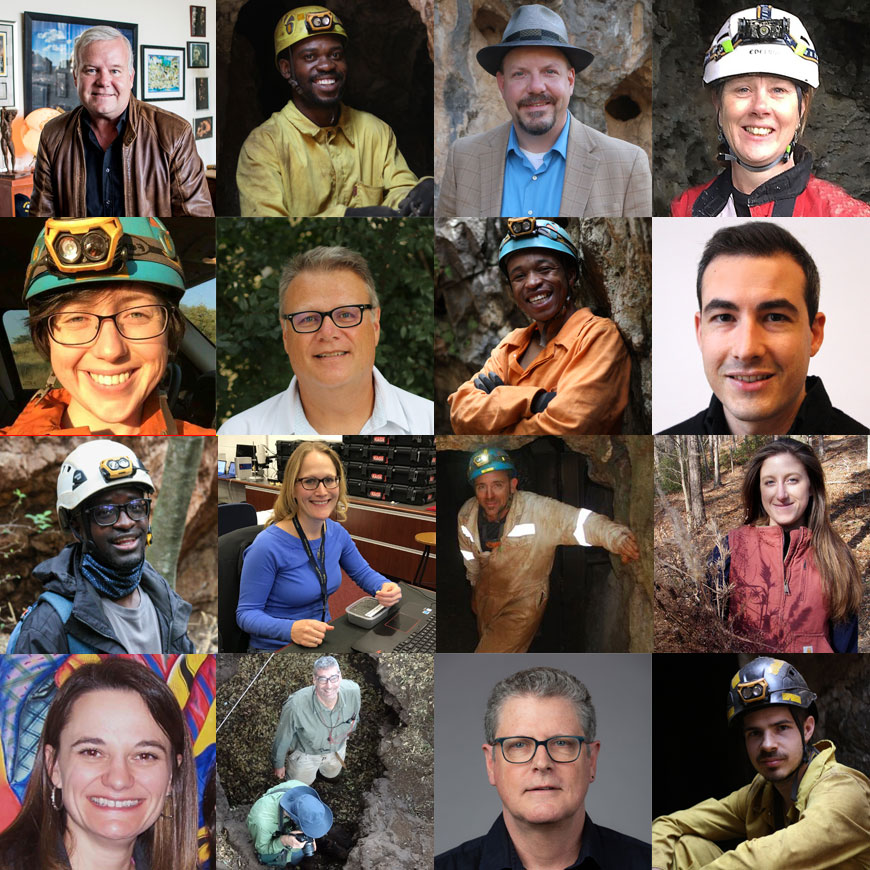 What does the name of the child “Leti” mean?

Was Leti a male or female?

We do not know if Leti was a male or female. Future studies using such methods as ancient proteins may establish its sex.

Where in the Rising Star cave system was Leti found?

The Rising Star cave system has more than two kilometres of passages and chambers. Leti was found in an extremely narrow passage that is 15cm wide by 80 cm in length. The fragmented remains were found on a shelf of limestone about 80cm above the present cave floor. The passage is about 12 meters away from the Dinaledi Chamber and adjacent to a chamber known as the “Chaos Chamber”.

Could the skull have been carried there by a scavenger or predator, or been washed into the passage?

How the skull of the child came to rest in this remote location remains a mystery. However, there is no visible predator or scavenger damage on any parts of the skull, nor is there any evidence that suggests that the sediments surrounding Leti have been moved by water or other means, that may have resulted in the depositing of the skull into this remote location.

It is not known whether Leti was buried in the passage or whether her bones were placed there. The situation is very similar to the way Neo, and adult male Homo naledi from the Lesedi Chamber of the Rising Star system, in that he was also found in a narrow passage. However, there have been no remains of Leti’s body found yet. The situation where Leti’s skull was found is very difficult to access, making excavation difficult, but at this stage it appears that only Leti’s skull was in the passage.

How old was Leti when she died?

Based on dental eruption, Leti would have been about 4 to 6 years old when she died if she matured like a human. But at present we have not established exactly how fast Homo naledi children grew, so it is possible she was younger.

How big was Leti’s brain?

While her brain is only preserved in fragments, comparison of the curvature and length of these remains lets us compare her brain to similar sized individuals like the Taung skull of Australopithecus africanus, which has a very similar sized braincase it appears.  Thus, we can estimate that Leti’s brain capacity would have been around 450 to 610 cubic centimetres.  Based on her developmental age, this would mean Leti’s brain would be about 90 to 95% of its adult size when she died. Her adult brain size would therefore have been similar to other members of her species had she reached adulthood.

Did Leti look the same as other Homo naledi individuals?

One of the important aspects of Leti’s discovery is that she has skull fragments associated with teeth. These are the first skull fragments of a child of Homo naledi described so far and so they can only be compared to adult crania at this time. However, the shape of the front of the skull, know as the glabella is preserved and is very similar in shape to adult naledi’s in this region. Leti’s teeth are all very similar to those of other Homo naledi in their shape, size and form.

Do we know how Leti died?

There are no signs of injury on Leti’s skull, although it is in many fragments, so we don’t know what caused her death.

How long ago did Leti live?

We cannot date the area where Leti was discovered but the remains of other Homo naledi found nearby date to between 236,000 and 335,000 years ago and at this time it is hypothesised that Leti is the same age as these nearby remains.

Since we don’t have any bones from Leti’s body we have to look at those of other specimens of Homo naledi to establish how they walked and these all walked on two legs.  As Leti’s skull and teeth don’t differ from other remains of Homo naledi discovered, it is rather certain she also walked upright like her relatives.

Why is Leti’s skull important?

As this is the first skull remains of a child of Homo naledi discovered, and because there were teeth discovered in association with the skull remains, we can begin to develop a better understanding of the growth and development of the species. The adult anatomy of Homo naledi is already among the best known for any ancient hominin species and Leti’s adds to our understanding of how this remarkable species “grew up”.