COLUMN: Data domination by Big Tech, both nationally and internationally, has ominous implications for economies – and privacy.

The so-called 4th Industrial Revolution, the associated growth in artificial intelligence (AI), and the use of data science has become a key feature of our current economy.

The data aspect has seen a number of universities, including Wits University, developing new programmes that combine data science with finance, health, engineering and related fields.

While there is potential for these developments to generate new sources of economic growth, there are some concerns too, which policymakers need to address.

An area that has not received much attention – at least in public debates about data-related issues – is the fact that data collection and its use (or misuse) may be creating conditions in some instances for firms that dominate economic activity to exclude other players in the market, especially new and innovative entrants. Competition economists and lawyers have been grappling with these issues for a number of years.

In June 2019, the United States Federal Trade Commission announced that it was investigating a potential anti-competition case (or antitrust case, as the US refers to it) against Amazon, which has a market share of almost 50% of all online sales in the USA. It operates both as the provider of a platform for online sales, and as a retailer in its own right, using its own platform to sell goods. Third parties also use the Amazon platform to sell their goods.

The allegation against Amazon is that it may be using the data generated on its platform to exclude its retail competitors that sell their products on Amazon’s platform. The problem is that third party retailers have no option but to use Amazon’s platform. 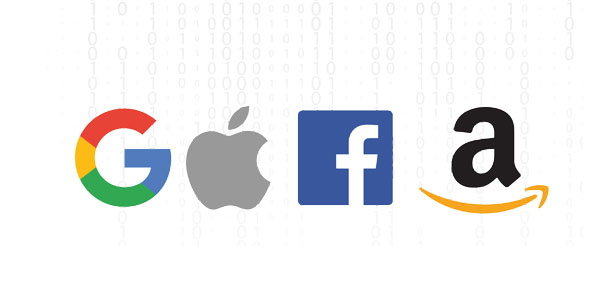 The Amazon case follows a number of other similar cases in the European Union (EU), where the region’s competition authority recently fined Google 2.4 billion Euros for anti-competitive behaviour in its comparative shopping service.

Google is used for over 90% of all internet searches. Google also has interests in goods and services that people purchase when they search using Google’s shopping search facility.

The EU competition authority argued that this behaviour is anti-competitive and illegal. Furthermore, in the largest competition law fine in history, Google was fined 4.3 billion Euros for forcing cell phone manufactures that use its (supposedly free) Android software to preload the Google browser (Chrome) and search facility (Google Search).

The EU is also investigating Facebook for anti-competitive behaviour. The German competition authority has banned Facebook from combining users’ data across its own platforms without their consent, because this places Facebook in a position to exclude its competitors from competing fairly.

These and similar cases against the so-called GAFA (Google, Amazon, Facebook and Apple) raise important questions about the use and abuse of data in the economy. Many of these cases are on appeal and it will be interesting to see the outcome.

From an economic perspective, the developments in these cases raise policy questions. One is the question of ‘killer acquisitions’ – are large digital companies purchasing virtually all smaller tech companies that could blossom into competitors?

The economic question here is whether these mergers and acquisitions entrench power over information, and remove small companies from the market before they become competitive rivals? For example, when Facebook purchased WhatsApp, Facebook argued that the companies operate in different markets and it would be impossible to combine data from these markets. The reality has proven different.

A number of these data industries are characterised by what economists call a ‘two-sided market’ – these are markets with two distinct user groups. Credit cards are a good example of a two-sided market – card holders and merchants engage and trade through an intermediary’s platform. The rise of data has created a number of these platforms.

The competition policy challenge is that these two-sided markets often ‘tip’ – that is, a number of firms compete in the market but, at some point, the market tips so that only one player – or a few players – come to dominate the market. Google’s dominance of the search industry exemplifies such a tip.

The difficulty from a policymaker’s perspective is that there is a lot of innovation and competition in these markets to begin with, but once the tipping point has been reached, one firm or a group of firms then dominate the market and may well be stopping smaller, innovative firms from growing. And, they may well be acquiring and ‘killing off’ very innovative new competitors, thus reducing the rate of innovation and technological development.

The challenge is the difficulty in predicting the ‘tipping point’. So often these challenges have to be dealt with when firms are already dominant and possibly abusing their dominance of data.