From slow sand filters and to towers that measure energy and gases.

The slow sand filter method has been used for centuries to treat water. It’s so effective that the World Health Organization has given it its stamp of approval: “Under suitable circumstances, slow sand filtration may be not only the cheapest and simplest but also the most efficient method of water treatment.”

However, this method has mostly been used on a large scale and isn’t suitable for the thousands of South African households who battle daily to have clean drinking water in their homes.

Busisiwe Mashiane, a fourth year chemical engineering student in the School of Chemical and Metallurgical Engineering at Wits, is researching and developing a slow sand filter to meet the needs of South Africans.

“Many South Africans living in disadvantaged communities across the country not only have difficulties accessing water but also face many health risks due to the lack of access to clean drinking water,” explains Mashiane.

“Our aim is to develop a low-cost but highly efficient water treatment system that can treat river water effectively and make it consumable. We want to ensure that, because people in these communities cannot afford elaborate water treatment methods, our system can assist in their basic human right of having access to clean potable water.”

A continuous water flow from a 25 litre tank feeds into a reactor tank (the sand bed). From here the water flows into a 25 litre transparent sterlisation tank, after which the clean water can be dispensed into a storage container for use.

The sand bed in the reactor tank is made up of layers of fine gravel, then activated carbon, and finally coarse gravel and fine sand. 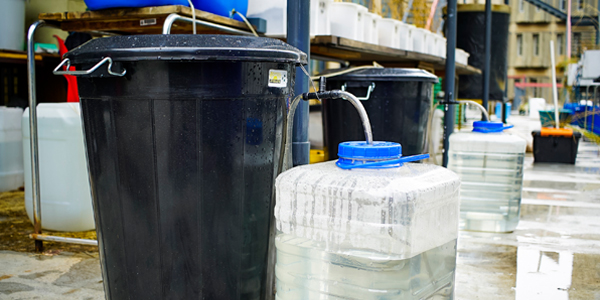 “Our research project is aimed at figuring out the mechanisms of the slow sand filter, to see how it functions under different conditions, and to find ways to optimise it,” says Mashiane, adding that the plan in future is to take the project out of the lab and into homes where it can make a difference in people’s lives.

“We want to discover what its limitations are and eventually find the best way to replicate the design and easily cut down the set-up time – currently between three to four months due to the need to wait for the biological layer to form.”

Researching the link between ecosystem and climate

A high-tech scientific research installation, called the Eddy Covariance Flux Tower was erected in 2015 in Agincourt, Mpumalanga, which is home to the Medical Research Council/Wits Rural Public Health and Health Transitions Research Unit.

“The Eddy Flux Tower is a piece of equipment which measures the exchange of energy and gases between the land surface and the atmosphere, and does so at landscape scale – over a footprint of about a kilometre. The towers were set up to measure carbon dioxide exchange, but also measure water exchange,” says Professor Bob Scholes, world-renowned scientist in systems ecology (regarding African savannahs) in the School of Animal, Plant and Environmental Sciences at Wits.

The Agincourt tower is part of a network of towers in the Skukuza and Malopeni villages in the Lowveld. It was erected by a research consortium that includes Wits University, the Council for Scientific and Industrial Research (CSIR), and various South African and German universities.

The project investigates the coupled carbon and water cycles of natural and disturbed savannah ecosystems in southern Africa. It aims to deepen the knowledge on how the natural environment functions in rural communities in southern Africa. This knowledge is crucial for understanding the link between ecosystems and climate, and how changes in land use may impact the climate in the future.

“These towers provide powerful insights into one of the key processes in the hydrological cycle, which control the amount of water entering aquifers [an underground layer of water-bearing permeable rock] and rivers for human use, and how it might change with a changing climate,” says Scholes.

The flux tower houses a range of sophisticated equipment used to measure how much carbon dioxide, water vapour, and energy move between the land surface and the atmosphere. Other measurements, including climate parameters (temperature, humidity, rainfall, atmospheric pressure), are made to get more information about processes of the savannah ecosystem.

“The research would help us understand changes in greenhouse gas concentrations and how they influence agricultural and ecosystem productivity,” says Scholes.

The Skukuza tower, erected in 2000, was the first in Africa and today there are about eight scattered around the country. Another six towers will be erected through the Department of Science and Technology’s South African Research Infrastructure Roadmap (SARIR), the first project of its kind in South Africa. SARIR is a strategic intervention to provide research infrastructure across the entire public research system that builds on existing capabilities and considers future needs.