The mud beneath the digital magic

The bones of the Fourth Industrial Revolution, like every industrial revolution in the past, come from the dirt under our feet.

The gold that you see at the end of your charging cable is a good example. If you live in Johannesburg, dig a hole and you will almost certainly have gold in your spade. With the right skill, time, and knowledge, it is entirely possible to refine that to pure gold with nothing more than what you already have in your house and garden. Tens of thousands of people do this every day in Johannesburg, although you will only hear of them on the news when some of the so-called ‘illegal’ miners die underground. Without them, and those like them all over the world today, the digital world and the Fourth Industrial Revolution would struggle to exist.

The stuff that makes your cellphone do amazing things comes from the mud of rivers in the Congo and India, from the high mountains of Bolivia, and from the Amazon lowlands. The rocks that are scratched and blasted out of remote mines provide elements that few people have heard of – tantalum, tellurium, caesium, neodymium, and other rare earth elements. We all know about gold, silicon, titanium and other more common materials that make up the backbone of this new age, but these, too, are extracted from the Earth at great cost. 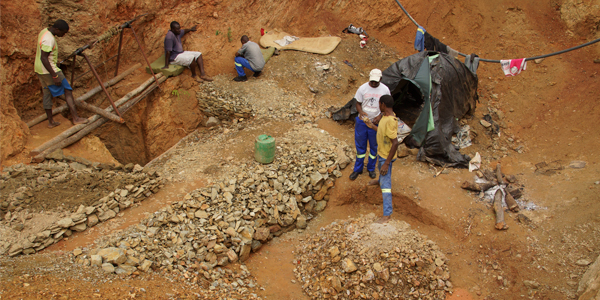 A lot of it is ugly, unregulated, unprotected, more than dangerous and sometimes criminal. At present, we do not know how much of these essential elements come from the backbreaking and often lethal work of artisanal miners – people who work with little more than a spade, pick and bucket. Unless you know exactly what to look for, you will not see this industry that provides a living for hundreds of thousands across the Highveld and other gold-bearing regions. Our research shows that these manual methods manage to refine almost 100% of the gold out of the ore. Industrial processes are still not capable of doing this.

Indigenous African mining and metallurgical technologies have existed for more than a thousand years in southern Africa. We are exploring how contemporary artisanal and small-scale miners do this today and comparing this with what was done in the past. Its impact on people and societies is gradually coming into view. Government policy that continues to ignore it or seeks to criminalise it is increasingly short-sighted. This is as much a part of the southern African future as it was in the past.

Presenting both challenges and opportunities, artisanal and small-scale mining provides an increasingly substantial portion of the world’s supply. Artisanal mining and metallurgical technology compete successfully with highly-capitalised industrial mining. It requires almost no capital investment but requires hard work, skill, and courage. While underground extraction of ore attracts the most attention, the bulk of the labour is consumed in processing ore above ground by large communities of workers including men, women, and children.

In short, the Fourth Industrial Revolution relies substantially on mines and mineral deposits worked by hand with little more than Stone Age technologies. The products travel along secret networks that are much like the “Silk Routes” or spice trading networks of the ancient world. These materials move directly from teams of miners’ small villages into the global digital and technological economy.

The miners themselves are directly connected to global markets through their cellphones. They are highly aware of their own skill and value and negotiate prices for their products. While they are ‘illegal’ in terms of South African law which protects the big mines, they are certainly not criminal. They have pride and they are resilient in the face of police harassment and criminal exploitation.

‘High tech’ has evolved slowly from the first iteration of the theoretical digital computer in the mind of Alan Turning,
through the first computers built of vacuum tube ‘valves’, and ultimately through to the vast digital storehouses that make the global internet possible. But the complex chemistry and physics of the materials on which all of it depends still comes from human labour and the artisanal skill of people who are both willing and able to take it out of the Earth and provide it to the global markets.

Associate Research Professor Robert Thornton is an ethnographer and cultural and medical anthropologist. His current
research focuses on African indigenous knowledge and practices of traditional healing. His new research focus is ‘Metals, Magic, and Medicine’, which explores the history of traditional healing in the South African archaeological and ethnographic context. This involves studying early mining and high-temperature technologies in relation to ritual sites and healing practices.

Read more about the Fourth Industrial Revolution and the interface between humanity and technology in Wits' new research magazine CURIOSITY, the iHuman edition.