The rise of big data and advances in information technology has serious implications for our ability to deliver sufficient bandwidth to meet the growing demand.

Andrew Forbes, Distinguished Professor in the Wits School of Physics and Head of the Structured Light Laboratory, and collaborators, are looking at alternative sources that will be able to take over where traditional optical communications systems are likely to fail in future.

“The team demonstrated over 100 patterns of light used in an optical communication link, potentially increasing the bandwidth of communication systems by 100 times,” says Forbes.

Traditional optical communication systems modulate the amplitude, phase, polarisation, colour and frequency of the light that is transmitted. Despite these technologies, it is predicted that a bandwidth ceiling will be reached in the near future.

“But light also has a ‘pattern’ – the intensity distribution of the light – that is, how it looks on a camera or a screen. Since these patterns are unique, they can be used to encode information,” he explains. “Future bandwidth can be increased by precisely the number of patterns of light that we are able to use. Ten patterns mean 10 times increase in existing bandwidth, as 10 new channels would emerge for data transfer.” 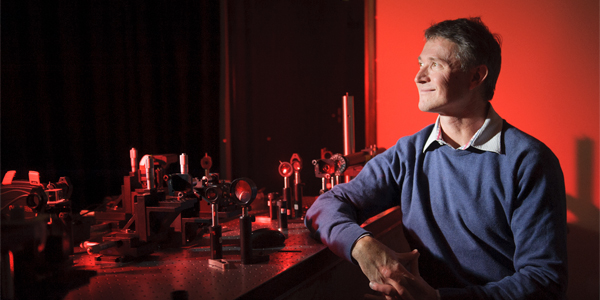 Currently, modern optical communication systems use only one pattern. This is due to technical hurdles in how to pack information into these patterns of light, and how to get the information out again. The team showed data transmission with over 100 patterns of light, exploiting three degrees of freedom in the process.

“We used digital holograms written to a small liquid crystal display and showed that it is possible to have a hologram encoded with over 100 patterns in multiple colours,” says Forbes. “This is the highest number of patterns created and detected on such a device to date. We have effectively shown that packing more information into light has the potential to increase bandwidth by 100 times.”

The next stage is to move out of the laboratory and to demonstrate the technology in a real-world system. The approach can be used in both free-space and optical fibre networks.

In a related study, Forbes and his fellow Wits physicists demonstrated that real-time error correction in quantum communications is possible. “This has tremendous implications for fast and secure data transfer in the future and will aid technological advances that seek to establish more secure quantum communication links over long distances,” says Forbes.

“Essentially, the research demonstrates that sometimes Nature cannot tell the difference between the quantum and the classical (or real) worlds and that a grey area exists between the two worlds called ‘classical entanglement’. By working in this grey area between the classical and the quantum, we can show fast and secure data transfer over real-world links.”

Read more about the interface between humanity and technology in Wits' new research magazine CURIOSITY, the iHuman edition.