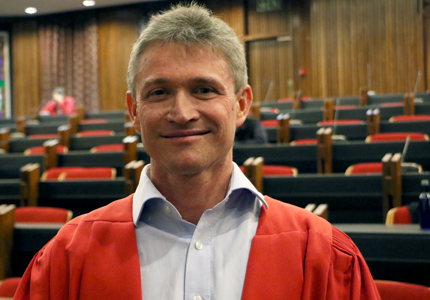 The Optical Society (OSA) in Washington, DC, this week announced that Forbes, Distinguished Professor and Head of the Structured Light Laboratory at Wits University, has been elected a Fellow Member of the association.

The OSA Board of Directors said Forbes is one of 96 OSA members, representing 19 different countries, who have been elected as the newest class of OSA Fellows.

“Fellow membership in OSA is reserved for members who have served with distinction in the advancement of optics and photonics,” the OSA said in a statement.

Elizabeth Rogan, CEO of the OSA, said Forbes is being honoured “specifically for significant contributions to structured light at the classical/quantum regimes, as well as directly at the source in the form of novel lasers, thereby serving as a role model for Africa.”

OSA Fellows are selected based on several factors, including specific scientific, engineering, and technological contributions, a record of significant publications or patents related to optics, technical or industry leadership in the field as well as service to OSA and the global optics community. As a reflection of The Optical Society’s global reach, 59% of this year’s Fellows reside outside the US.

“Heartiest congratulations to the 2017 OSA Fellows, who are excellent examples of optics and photonics innovators and will be outstanding representatives of The Optical Society,” said Alan Willner, 2016 President of The Optical Society and Steven & Kathryn Sample Chair in Engineering, University of Southern California, California, US. “The new Fellows join an illustrious group who has collectively had great impact on our field and society at large.”

Since taking up a Distinguished Professorship in the Wits School of Physics in March 2015, Forbes established the Structured Light Laboratory at the University where his team has already had some notable achievements: the creation of a vector microchip laser; the first demonstration of quantum interference in high dimensions; a new approach to packing information into light, which the group sent over free space (air) and optical fibre (glass), as well as bringing this cutting edge science back into teaching through the use of digital holograms to demonstrate some very basic physics and mathematics in a laboratory.

Forbes and his team are also exploring new techniques with optical communication that include researching how to pack information into light, transmit it over distance and then unpack the information on the other side. This year the team has shown that data can be transmitted with over 100 patterns of light, effectively increasing in the amount of information that can be 'packed into light'.

About The Optical Society

Founded in 1916, The Optical Society (OSA) is the leading professional organization for scientists, engineers, students and business leaders who fuel discoveries, shape real-life applications and accelerate achievements in the science of light. Through world-renowned publications, meetings and membership initiatives, OSA provides quality research, inspired interactions and dedicated resources for its extensive global network of optics and photonics experts.