African researchers demonstrate a 100x increase in the amount of information that can be 'packed into light'.

The rise of big data and advances in information technology has serious implications for our ability to deliver sufficient bandwidth to meet the growing demand.

Researchers at the University of the Witwatersrand in Johannesburg, South Africa, and the Council for Scientific and Industrial Research (CSIR) are looking at alternative sources that will be able to take over where traditional optical communications systems are likely to fail in future.

In their latest research, published online today (10 June 2016) in the scientific journal, Nature, the team from South Africa and Tunisia demonstrate over 100 patterns of light used in an optical communication link, potentially increasing the bandwidth of communication systems by 100 times.

The idea was conceived by Professor Andrew Forbes from Wits University, who led the collaboration. The key experiment was performed by Dr Carmelo Rosales-Guzman, a Research Fellow in the Structured Light group in the Wits School of Physics, and Dr Angela Dudley of the CSIR, an honorary academic at Wits.

Bracing for the bandwidth ceiling

Traditional optical communication systems modulate the amplitude, phase, polarisation, colour and frequency of the light that is transmitted. Yet despite these technologies, we are predicted to reach a bandwidth ceiling in the near future.

But light also has a “pattern” – the intensity distribution of the light, that is, how it looks on a camera or a screen.

Since these patterns are unique, they can be used to encode information:

What does this mean?

That future bandwidth can be increased by precisely the number of patterns of light we are able to use.

At the moment modern optical communication systems only use one pattern. This is due to technical hurdles in how to pack information into these patterns of light, and how to get the information back out again.

How the research was done

In this latest work, the team showed data transmission with over 100 patterns of light, exploiting three degrees of freedom in the process.

They used digital holograms written to a small liquid crystal display (LCD) and showed that it is possible to have a hologram encoded with over 100 patterns in multiple colours.

“This is the highest number of patterns created and detected on such a device to date, far exceeding the previous state-of-the-art,” says Forbes.

One of the novel steps was to make the device ‘colour blind’, so the same holograms can be used to encode many wavelengths.

According to Rosales-Guzman to make this work “100 holograms were combined into a single, complex hologram. Moreover, each sub-hologram was individually tailored to correct for any optical aberrations due to the colour difference, angular offset and so on”. 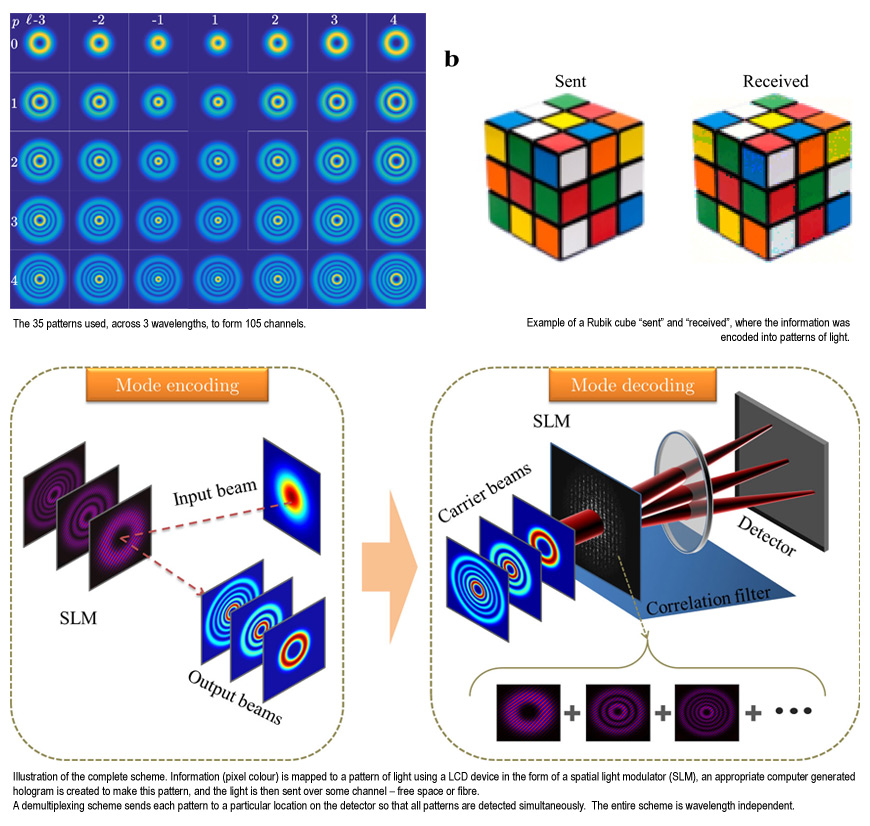 The next stage is to move out of the laboratory and demonstrate the technology in a real-world system.

“We are presently working with a commercial entity to test in just such an environment,” says Forbes. The approach of the team could be used in both free-space and optical fibre networks.

The first experiments on the topic were carried out by Abderrahmen Trichili of Sup’Com (Tunisia) as a visiting student to South Africa as part of an African Laser Centre funded research project. The other team members included Bienvenu Ndagano (Wits), Dr Amine Ben Salem (Sup’Com) and Professor Mourad Zghal (Sup’Com), all of who contributed significantly to the work.

This project was supported by the African Laser Centre, a virtual centre funded by the South African Department of Science and Technology (DST) to support research collaborations between African countries in the field of photonics.

Mode division multiplexing (MDM) is mooted as a technology to address future bandwidth issues, and has been successfully demonstrated in free space using spatial modes with orbital angular momentum (OAM). To further increase the data transmission rate, more degrees of freedom are required to form a densely packed mode space. Here we move beyond OAM and demonstrate multiplexing and demultiplexing of over 100 modes using the radial and azimuthal degrees of freedom. By creating wavelength independent holograms we are able to demonstrate this technique on a spatial light modulator. Our results offer a route to higher bit rates for next generation optical networks.