What we caught online

We need new rules of engagement on social media – even if we don’t know it yet. 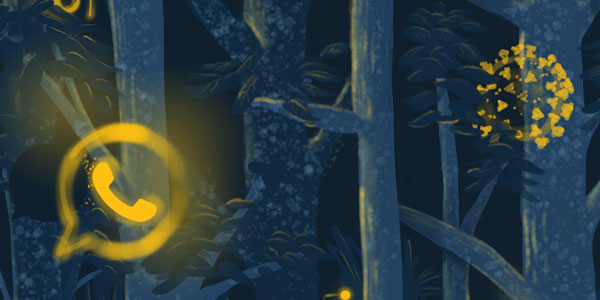 It may be the superpower of our time: finding the courage to disable notifications on your social media apps.

Recognising the need to claw back some of the attention we squander on the internet and social media is the first step in being able to navigate with greater success – and less stress – our world of information overload, disinformation, fake news and what some even call an “infopocalyse” and “infodemic”.

“Infopocalyse” may be hyperbole, as the rise of the machine (and code) is far from a write-off for humanity. Someone like Yuval Harari, historian, philosopher and author, would argue anyway that humans are a “post-truth species”, we are by no means freshly arrived to a world where fictions are propped up for power, or propaganda is sharpened until it is a weapon.

A tool, not an agent

Dr Helen Robertson, who teaches an ethics course to master’s students in the School of Computer Science and Applied Mathematics, says there is no turning back the viral impact of social media – “the genie is out of the bottle”. She cautions against sensationalism that social media is in and of itself the problem.

“We need to think about social media as a tool, not necessarily an agent that is value laden. The value, or lack thereof, comes from what humans want do with the technology,” she says.

Robertson says the platforms are designed to be fine-grained. This subtlety – which is also complex – gives technology the scope, scale and speed to spread and entrench certain agendas and values with devastating success.

There are reasons to be concerned, or at least be more vigilant, says Dr Benjamin Rosman of the School of Computer Science and Applied Mathematics. Rosman says the “noble” intentions that may have informed the early days of the internet – ideas like universal access, connectivity and an unfiltered free-flow of information – have morphed, and morphed fast and ugly.

“It seemed reasonable in the beginning that platforms like Facebook and Twitter were free in exchange for users having to see a few adverts displayed. But that turned to developers targeting advertising using autonomous algorithms learning from users’ data – things like your Google searches, what we engage with most and how long we remain engaged with content,” says Rosman.

Even that was relatively benign. But, as platforms like Twitter, Facebook and Google have vied for users’ attention and engagement to make profits, Rosman says algorithms have been used to not just tailor and target advertising but also to hold attention and encourage engagement. Achieving this comes down to exploiting emotions, in particular outrage, Rosman says. The algorithms have learnt that people respond most to content when they are outraged. So the algorithm pushes more incendiary content to an outraged person and lights the fire of a vicious cycle.

“The algorithms are designed to keep you on sites for longer, ensuring more engagement and effectively keeping you more addicted and making your attention the commodity,” he says.

Rosman says as people froth with outrage in their echo chambers and bubbles, the algorithms also starve them of exposure to content that presents rational, opposing views. It is a dangerous blindsiding that deepens polarisation and can ‘destabilise civilisations’. Destabilisation could be skewing voting and political outcomes, creating rifts, breaching privacy rules, introducing harassment in the form of trolling, offering fake news that stands in for decision-making and deepening the erosion of critical thinking.

For Phumlani Nhlanganiso Khoza, founder of Scilinx Research, which is part of the WitsNeuRL Neuroscience Research Laboratory, the social media platforms are not likely to change much, which means users need to get savvier.

“The technology is not going away and it can be a wonderful classroom. The problem is how people react to metrics,” says Khoza.

He adds that there’s a growing mental health burden as people seek the dopamine hit from social media interaction. Dopamine is the chemical transmitter released when we are rewarded or motivated. It is also linked to attention and memory.

“For some people they feel terrible when they don’t get attention on social media and their perceived competing influencer does,” he says.

Khoza says people should remember that social media is a cocoon – just one reflection of the world.

The majority of people in the world are not engaged on any of these platforms. He points out that social media is filled with bots; software applications capable of creating fake accounts, fake followers and troll armies.

A way to break free from the feedback loops is to improve foundational learning in society. This would entail teaching that supports deep thinking and problem solving, not methods that are fixed to metrics, memorising or rigid timeframes.

Added to this, Khoza says, there needs to be investment in technology and innovation as well as adaptive, proactive regulation. “Some regulations mean very little. They are not very effective. When even I, as a techie, am not going to read or understand everything that goes into something like a cookies policy that come up on a website, then it’s clear companies are just trying to cover themselves,” he says.

But innovation could help. It could be an app that summarises content on an issue to win back time and be a buffer against triggering content. It could be removing “like” buttons, retweeting and sharing options, follower counters and even possibly a default option that scrubs users’ data and histories from platforms.

Khoza says, ultimately: “Social media is a diet of the mind – choose what you want to consume and accept that sometimes you just have to leave the platform or exit the group.”

It makes for thinking about rules and regulation for new media, says Professor Ufuoma Akpojivi, Head of Media Studies. “We should fact check before we share or respond to something – or at least read the article and comments first. And just like old media has rules and policies about how people are allowed to comment or engage, new media should have the same,” he says.

“The beauty of democracy is that we don’t all need to agree, but some users on platforms like Twitter are not looking for engagement, they are there to shout at others or to police people and they haven’t learnt to agree to disagree.”

Only an estimated eight million South Africans, out of a population of 58 million, have Facebook accounts. That leaves the majority shut out, even if it is from the “binary opposition debates” that Daniels says marks social media interaction.

“In less than 10 years, we’ve gone from about 575 community newspapers to fewer than 200 today – all the advertising, including the communities’ news itself, has gone to Facebook and it’s outrageous that Facebook has gained all of this for free. The FANGS [Facebook, Amazon, Netflix and Google] make the profits these days. Many are not paying tax and governments, civil society, NGOs and everyone lets it pass – all unregulated – because we are told it’s the way right now, there’s nothing you can do,” says Daniels.

Widening digital divides pushes people further into their corners, says Professor Imraan Valodia, Dean of the Faculty of Commerce, Law and Management.  At the most fundamental, he says, are the divides noted by the Future of Work(ers) project at Wits University’s Southern Centre for Inequality Studies. They point out “the exorbitant cost of mobile phones and data, inadequate network coverage and access to electricity, users’ limited literacy, and gender norms that discourage women from using cellphones”.

Along with this, the world is seeing a rise of far-right leaders and populism. “People feel increasingly excluded, so they resort to things like petty nationalism or they target migrants.” Valodia points out that data has become virtual gold, and the monetisation of social media companies has meant a concentration of massive wealth in the hands of a few, adding to imbalance and divisions in society. There are no silver bullets for changing social media into something that does more good than bad, but there is pushback in the form of smarter regulation and a louder call for transparency, he says.

Valodia has most recently been involved in shaping competition regulation policy. It entails building frameworks to ensure that large tech companies are prohibited from mergers and acquisitions that essentially allow them to buy out start-up companies that may become potential competitors. Change and safeguards must also come with old-fashioned social action, he says.

“If we find something unacceptable as a society – like the massive concentration of wealth held by a few – we have to fight to change it. We have to design the rules that make our world more sustainable and equitable.”

We may not be at the point of deleting all our social media apps just yet, but the time has come for new rules of engagement, even if most people don’t realise it yet.