Valour and the virus

Throughout her career, Professor Glenda Gray has focussed on one thing only – saving lives. 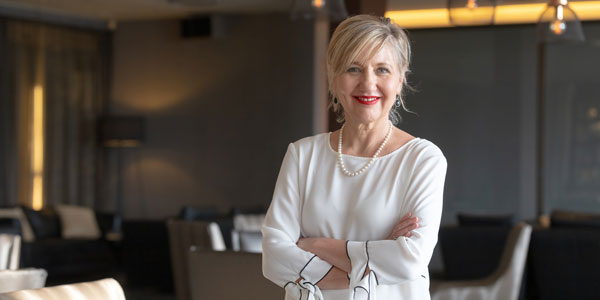 This focus has brought her into conflict with government and the science establishment. But using hard data as evidence, she made a massive contribution to overturning disastrous national health policy on HIV. Delia du Toit asked her to reflect on HIV, denialism and the gray in between.

“I hate working from home,” declares Professor Glenda Gray against a neutral palette of grey and cremé in her Cape Town home. “Hate it, hate it.”

It makes sense, as she is used to commanding health conferences, steering teams of researchers, and chairing some of the most respected and effective medical committees in the world. She’s used to getting her hands dirty, working like a “bat out of hell”. Gray’s impatience in saving lives and finding a vaccine for HIV – and lately Covid-19 – turns her into her own worst critic.

As CEO and president of the South African Medical Research Council (SAMRC), chair of the research sub-committee on Health Minister Zweli Mkhize’s team of 50 expert Covid-19 advisors, and Co-Principal Investigator of the National Institutes of Health’s HIV Vaccine Trials Network, which conducts over 80% of candidate HIV vaccine clinical trials globally, Gray has built up an international reputation as one of the best in the world in her field. She was awarded the national Order of Mapungubwe in 2013, and earned a spot on TIME’s list of the 100 most influential people in the world in 2017. In 2018, she earned her A-rating as a researcher.

But none of this comes without sacrifice. She admits that she has barely slept this past year. “I’m just always behind, there’s so much to do. In the beginning of the Covid-19 pandemic, I would wake up in the middle of the night, worrying about our country.”

It’s not the first time she’s felt this way. In the 1990s, at the height of the HIV/Aids pandemic, Gray worked around the clock to help the sick and dying around her. “HIV started emerging in the 80s, while I was doing my clinical training at the Chris Hani Baragwanath Academic Hospital in Soweto. It exploded in the wards, there was just tremendous death all around us. I spent my weekends with comrades in Soweto organising HIV workshops.”

Her first study was on whether HIV-positive women in developing countries could safely feed their infants formula to avoid transmitting the virus through breast milk, and she presented the paper at an international AIDS meeting. “I had no idea of the controversy it would cause. After I finished my presentation, the first question from an audience member was whether I was on Nestlé’s payroll.

“At the time, health leaders recommended that women in developing countries shouldn’t feed formula, arguing that the risk of death from contaminated water outweighed that of contracting HIV. But I didn’t think white men from the northern hemisphere should make decisions for black, African women. I wanted to give the women the information and let them choose for themselves.”

Later, it turned out that women in Soweto were indeed able to use formula safely and reduce HIV transmission rates.

That incident would set the stage for much of her career – a drive to save lives while fighting convention. “Controversy has dogged me all my life,” she smiles wryly.

She established the Wits Perinatal HIV Research Unit at Bara in 1996, with Professor James McIntyre, and would soon fight a battle on two fronts as Aids denialism reared its ugly head at the highest level.

Former President Thabo Mbeki began courting denialists who said that poverty – not HIV – caused Aids and that antiretroviral drugs (ARVs) were toxic. “It was a public health disaster. The government kept saying it wasn’t Aids but selenium deficiency, while people were dying in the wards. I was angry and frustrated. I wasn’t just a researcher; I was also looking after these people. We knew for a fact that HIV transmission could be averted with drugs, and the government refused to supply them. We had evidence! So many deaths could have been avoided.”

She recalls a “screaming fight” with Manto Tshabalala-Msimang, then Minister of Health, who at the time advocated beetroot, lemon and garlic for curing Aids.

Some estimates have put the death toll of government Aids denialism at 330 000.

But Gray kept fighting the only way she could – through hard data and advocacy, clashing with those in power at every turn. “I never saw myself as a scientist, really. I wanted to alleviate suffering and science was just the vehicle.”

In 2001, Gray assisted the Treatment Action Campaign in taking on the government in court, demanding the distribution of treatment to HIV-positive pregnant women. Soon after, in 2002, Gray and McIntyre received the Nelson Mandela Health and Human Rights Award for their efforts to prevent mother-to-child transmission of HIV.

At the award ceremony, Mandela said that it was “beyond doubt and argument” that giving drugs to pregnant women is necessary. This award, and Madiba’s support, was critical in the fight against HIV, she says. It made it clear that the government was wrong. Later that year, the court ruled in favour of providing the drugs and finally, her real work could begin. Gray was involved in rolling out ARVs across the country, developing dosing regimens, and studying the effects.

In the spotlight again

But Gray would knock heads with government again. Earlier this year, she criticised aspects of government’s restrictions during the national lockdown to prevent the spread of Covid-19, saying that parts of the approach were “unscientific”.

“Politics and science are like oil and water,” she says. “But it must be that way, or one of us is doing something wrong. Scientists have an obligation to society and should never have to kowtow or explain government decisions. A healthy, robust scientific community is able to express itself.”

This time, however, Gray and the Minister of Health are fighting the same battle.

“What I can say about Mkhize is that he’s chosen lives over livelihoods. Lockdown has had other ramifications, but I can’t fault government’s caring for the people.”

While Gray has earned recognition for her work from across the world, she feels her proudest moments were where she could translate science into practice. “I’m grateful we could finally give ARVs to pregnant women in Soweto, after we’d promised them for so long that it would work.”

She is still in contact with some of the infants she helped save, who have since gone on to graduate and find jobs. “Reducing human suffering is what it’s all about.”

But she’s determined to help end at least one of the two pandemics, if not both. “I can’t say I’ve had a career highlight yet, because we haven’t developed an HIV yet. But every failure brings us closer to success.”

“For now, I’m sorry for being the poster child for failure,” she says, in all earnestness.