In the company of criminals

Column: Using the Covid-19 National State of Disaster to try to govern booze and cigarettes, is the wrong approach. 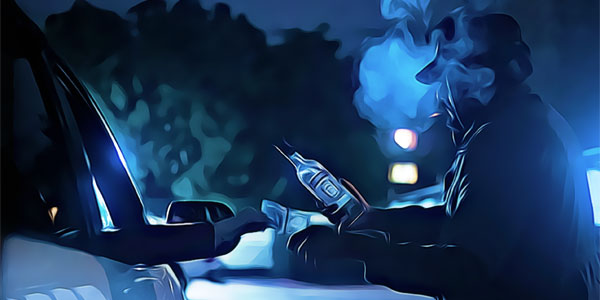 Dealing with this issue requires the same political will demonstrated against the pandemic.

I was sitting with a bunch of criminals. Hidden safely, in a quiet, dark corner of a restaurant where neither the cops nor the Virus could find us. Sipping an illicit coffee.

Those were dangerous days – shortly after the restaurant blockade had lifted. The restaurant was not yet allowed sit-down patrons. But there we were.

Looking around the table, I carefully took in the faces behind the masks. Bankers, CEOs, lawyers, businessmen. Criminals all of them – and that, admittedly, included me.

As one of the men looked down at the menu, his shoulders sagged. An involuntary sigh filtered through the puppy-dog face masking his mouth.

“I hate choices!” he shouted.

“It’s like when your spellcheck gives you 10 suggestions for the incorrect word you typed! How the COVID am I supposed to know which one to pick?” he cries – completely disconfoculated (don’t blame me – this word was suggested by my spellchecker).

At the time, when two people met randomly in the shopping aisle, conversation turned to how the national lockdown had broken the country, and then, more importantly, how to get hold of booze or cigarettes, banned by the government. Everyone had a plan. Each of us had become an outlaw.

Some started by simply ringing the emergency number listed on the front door of the liquor shop (something I hadn’t done since a morning, long before dawn in Parys, when I was a student more than 20 years ago). Others dipped into their community WhatsApp group, trading whatever commodity they had on hand – like a bag of compost in one case – for a bottle. But as the country’s combined desperation increased, the schemes became more sophisticated.

“Now that my Uber driver doesn’t have any passengers, he delivers booze for the local liquor store,” said one of the men, distractedly reading a Whatsapp over his glasses.

“My neighbour started selling the bottles of alcohol he had in his house, just to make some cash while he was out of a job,” says one of the lawyers. “He became so good at it that large, well-known distributors contacted him to distribute alcohol for them. Now he only sells alcohol by the pallet.”

The elderly friend of the mother-in-law of one group member made a bag of cash by selling off her late husband’s wine collection at more than 10 times the price it would have normally cost per bottle.

The guy with the puppy dog mask looks up – still undecided between the omelette and bacon or the haute cuisine boerie roll. “I brought a case of wine up from Cape Town the other day. I got stopped at the Vaal border, handed over three bottles to the cops, and went on my way – no problem.” The three bottles, it seems, was the going rate.

My own infraction came on a weekend, after being invited to a last-minute braai. I was invited on condition that I brought some beers. I scoured the neighbourhood in vain. Eventually, I ended up at an establishment that was allowed to sell alcohol over weekends, but only to sit-down customers.

“Can I have 12 beers, please?” I asked the barman, as confidently as possible.

“To take away or drink here?” he asked, leaning over the counter – eyeballs burning deeply into my soul.

“Take away,” I took a chance. Better to be honest, I figured.

“Can’t do it,” he said in a voice that would make James Earl Jones cringe, as he turned away, wiping glasses with a white kerchief. Conversation closed.

“Okay,” I said. Less confident. Legs shaking slightly. “I will drink them here.”

Without a further word, the bartender bent down and picked up a cardboard box full of new glasses. One by one, he took the 12 glasses out of the box, polishing each one to a shine. He then proceeded to take 12 of my chosen brand out of the fridge and packed them into the box. “I’m not allowed to do this …” he just let it hang, as he handed over the box, adding a 100% mark-up on the sale.

While the national lockdown was in many ways initially the right thing to do, the decision to ban the sale of cigarettes still remains a mystery to me. The myth that smoking cigarettes could intensify a Covid infection was quickly dispelled, and while the ban on alcohol sales may have kept some hospital beds open during the lockdown, I am still not convinced about the motives behind it.

The problem, as I see it, is that the government tried to use the powers bestowed by the state of disaster legislation to solve two social ills that the country is facing. The first is the pressure that cigarette smoking places on the health system and the second is the myriad problems that come with alcohol abuse.

I am not a smoker and I drink barely more than one beer in six months. But while I am the first to complain when I sit in a restaurant and a person at the table next to me decides to light up, for the couple of months during lockdown when smoking was banned, I fully backed the dudes who raised their rasping voices to be allowed the right to buy a cigarette. Using the lockdown to clamp down on real, serious issues the government has been unable to solve for decades is just wrong. These issues – as well as all of South Africa’s other problems, like public health, pit toilets in schools and the high road accident death toll – should receive the same kind of political will to sort out as government demonstrated in dealing with the Covid pandemic.

After becoming a ‘dry’ country and entering the prohibition era on 19 January 1920, the US banned the sale of alcohol to its citizens. While the intention was to deal with the national problem of alcohol abuse, the unintended consequences are clear today. Restaurants closed down as they were no longer able to make a profit without liquor sales, theatre revenues declined, legal breweries and distilleries closed down, cutting thousands of jobs, while thousands more truck drivers, waiters and other related workers lost their livelihoods.

The state of New York lost 75% of its revenue, which was derived from liquor taxes. In the end, prohibition cost the US a total of $11 billion in lost tax revenue and over $300 million to enforce.

While it’s still early days to judge South Africa’s mini prohibition during lockdown, the parallels are clear. The ban on cigarette sales didn’t stop cigarette trading: It merely drove the industry underground. A South African study published earlier this year showed that 93% of consumers were driven to buy cigarettes from illegal sellers. Many of them, I am sure, made use of the services of the cannabis shop in our neighbourhood. Ironically, this shop was allowed to stay open and actually posted a dodgy-looking guy in a trench coat on the side of the road, flashing packets of cigarettes to passers-by.

An investigation by Carte Blanche exposed that during the 70 days of the cigarette ban, more than R2 billion had been put in the pockets of organised crime syndicates.

With all their problems, alcohol and tobacco sales are large earners for the South African Treasury and banning them actually causes more problems than their ban would solve.

Unlike my friend with his spellchecker, most South Africans quite like the right to make decisions for themselves. Prohibition laws always backfire and usually turn good citizens into criminals. When South Africans want a beer for a braai, chances are that they will be able to find one. And, if all else fails, they can always visit the local copshop, where they are sure to find any brand they like – albeit at a premium.