Could a country’s collective psychology determine the outcomes of a pandemic? A global cohort of researchers believes so. 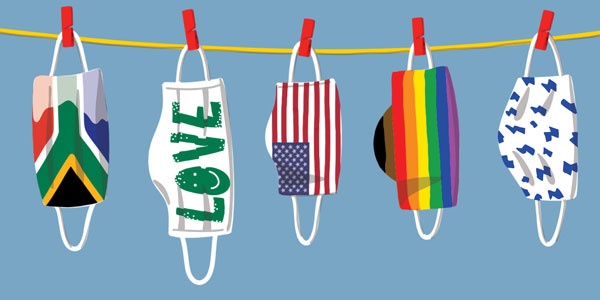 It is surreal to think how a microscopic virus has disrupted life as we know it, globally, and forever. During early lockdowns worldwide, we watched a science-fiction movie we never thought could materialise come to life, from Wuhan to Rome, Sydney to Johannesburg. No one was untouched. It was mindboggling and even virologists were astounded at times.

By October 2020, more than 20 million people globally had been infected with the new coronavirus and over one million have died.1 The Covid-19 pandemic represents one of the greatest health crises of the past 100 years.

A pertinent question to ask is what helped us as a global society to minimise the pandemic’s effects and reduce the rate of death? Face masks and young populations, some might argue. But a global team of nearly 230 experts found another unlikely answer in a group paper, International Collaboration on the social & moral psychology of COVID-19. The answer is national identity.

The research brought together scholars from around the world to examine “psychological factors underlying the attitudes and behavioural intentions related to Covid-19,” explains Dr Sahba Besharati, Senior Lecturer in cognitive neuroscience at Wits.

The lofty goal was to generate a massive multi-national sample that could serve as a public database for the scientific community. “It is a huge dataset which will be used for years to come. The sample currently includes 44 000 citizens in 67 countries,” Besharati says.

The international team investigated why people adopted public health behaviours (such as wearing masks and screening) and endorsed public policy interventions (like closing bars and restaurants) during the early stages of the pandemic, among other research questions. “The results showed that those who identified more strongly with their nation showed greater support for public health policies and adopted these public health behaviours,” says Besharati.

The paper defines “national identification” as the personal significance that being part of a nation holds for an individual. This national identity has been found to play an important role in motivating people to make costly contributions that benefit other members of their country – taxes, for example. The researchers found that harnessing this national identity could help promote “collective efforts to combat the pandemic within one’s country”.

Van Bavel found that Covid-19 revealed that during a pandemic there may be “healthy” elements of national identity (which can also have negative connotations such as xenophobia). “Citizens who identified more strongly with their nation reported greater support for critical public health measures. Our results provide robust evidence that national identification is a reliable predictor of all three forms of public health support measured in our survey: self-reported spatial distancing, physical hygiene and policy support,” he wrote.

Besharati says the results showed, at an international level at least, that people felt as if they were working together for a global good. “If there’s anything that this pandemic has done, it has reminded us of our interconnectedness. We can’t just look at anything from our small point on the planet any longer.”

Allowing ourselves to complain but comply with rules like border closures, travel bans, alcohol prohibition and more, showed how much we valued the health of our country’s citizens.

Managing the pandemic gave politicians a mechanism to foster togetherness, as the study found that “political leaders and public health officials often foster a sense that ‘we are in this together’ and [that we] can manage the crisis through collective action”.

The research also revealed that in the US, for instance, threats to strong national identity can lead to lower support for public health initiatives.

I am an African?

The insights into South Africans, who remain a fractured society still recovering from past trauma and having varying levels of gees (spirit, enthusiasm), will be interesting. While the Wits research team in the School of Human and Community Development contributed to the findings, these are yet to be analysed at a local level. “We have the unique problem now of an overload of data,” says Besharati.

Anecdotally though, despite the perception of South Africa’s difficult national identification problems, we did come together. “We are not too sure what the long-term impact will be, but we know it was a collective experience, even though it was not easy. We had an early lockdown, the peak was much later, kids were not at school, and the social restrictions all became exhausting,” says Besharati.

“South Africans do generally have a negativity bias when it comes to our nation and nation-building, from my personal perspective at least. We tend to be jaded. But the pandemic showed us that so many of our problems exist in many other countries. Despite these problems, when we do need to come together, we can do it.”

More on this research: