We are in ‘an abusive relationship’ with nature

Earth became our servant, and we need it to be our family, says Research Professor Matthew Chersich in delivering his inaugural lecture.

Chersich asserted that universities and the intelligentsia are the best placed to help mitigate the cascading effects of climate change, especially in the next 10 years. “The world needs a massive shift. A cultural change. Who will drive this change? Will it be from governments? Climate activists cannot do this alone. Universities, and particularly health faculties, are critical players in this next era, where humanity as a whole is severely threatened,” he said. 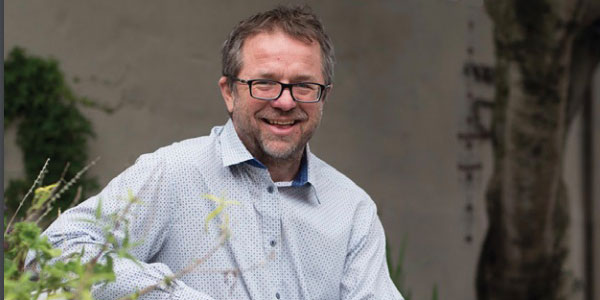 Chersich, of the Wits Reproductive Health and HIV Research Institute, presented his inaugural lecture Climate Change and Maternal Health in Africa: From Thermal Physiology to Public Health and Advocacy at the Marie Curie Lecture Theatre. He is one of pioneers of maternal health and climate change research, and a prolific climate activist at Wits University. Chersich also heads up the new Heat and Health African Transdisciplinary Center (HEAT) based at the Wits Health Consortium. HEAT is generating new knowledge on the impacts of heat and heat waves in Africa.

Climate change and maternal health is an emerging research field, with the evidence showing that increased temperatures (even marginally) have detrimental impacts on pregnant woman, including pre-term birth, and increased risk of preeclampsia. In addition, high temperatures during the first trimester increase the risk of congenital anomalies. Heat also increases the chance for infection and sets off inflammation.

“We’re now at a point of ‘climate choice’. After ten years, we will no longer have any control over the climate and health, especially in Africa, will flounder,” said Chersich.

However, there are numerous interventions being tested by the likes of Chersich and local and international researchers. The HEAT Center, for example, will focus on heat in vulnerable urban populations, using robust data science to drive change. Solutions will first be applied at district level and then scaled up. Crucially, HEAT will increase the capacity of government, communities and health workers.

“For example, the built environment and hospital settings, can be modified to reduce heat and thus related health complications. It is important though that these environments are co-designed and implemented with beneficiaries on the ground.

“The trouble is that there is very little funding directed towards health in the climate finance context. In adaptation planning meetings, health is not on the agenda. Locally, there is no health person on the Presidential Climate Commission. The trouble is, Africa is worst affected by climate change, with many parts becoming rapidly unliveable. But the continent has the least capacity to adapt to it, in part because of not being able to secure finance,” said Chersich.

Much of the research around climate change and health is concentrated in the global north, but this is changing. “We need to rapidly build research teams in Africa. What would be really wonderful is a faculty or school dedicated solely to climate change and health at universities. Importantly, public health is about more than treating disease.” Chersich urged academics to be involved with prevention and to promote locally-relevant innovation.

He is encouraged by the growing culture of research and innovation, and encouraged young and emerging scientists to find a good mentor, apply for grants and write as many articles as possible. “You must fully immerse yourselves in this important work.”

Chersich concluded his inaugural lecture on a philosophical note, encouraging others to ask whether nature is our slave, master and family. “Ancient cultures worshipped nature. But somehow, especially in the Judeo-Christianity context, earth became our servant. It is like we are in an abusive relationship. We do not even mourn the extinction of species, which happens all the time. If nature is our family, we may see the change we so desperately need. It is about rebuilding a new relationship with each other and the world.”

Chersich delivered his inaugural lecture on August 24, 2022. He has a wealth of experience having worked at the Perinatal Health Research Unit, the Rahima Moosa Mother and Child Hospital, and now at the Wits Reproductive Health and HIV Research Institute. Chersich completed his MBCCh in 1998, obtained a masters in public health from the London School of Hygiene and Tropical Medicine, and was awarded a PhD from the University of Ghent in Belgium.  He maintains close ties with the World Health Organisation. His 190 publications have an h index of 53.