Previously thought of as heavy, slow and sluggish, the 260-million-year-old predator, Anteosaurus, was a ferocious hunter-killer.

Judging by its massive, bone-crushing teeth, gigantic skull and powerful jaw, there is no doubt that the Anteosaurus, a premammalian reptile that roamed the African continent 265 to 260 million years ago – during a period known as the middle Permian – was a ferocious carnivore. 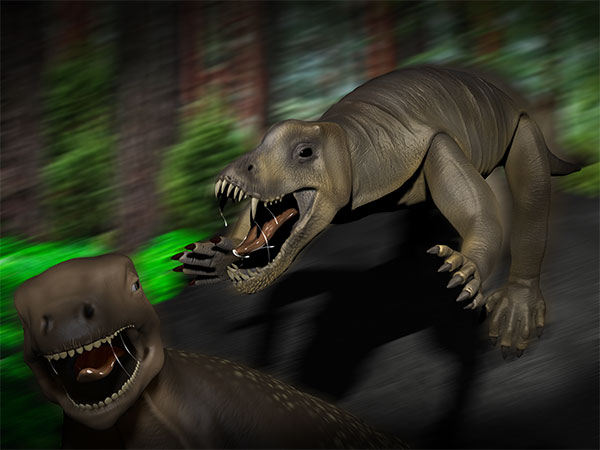 However, while it was previously thought that this beast of a creature – that grew to about the size of an adult hippo or rhino, and featuring a thick crocodilian tail – was too heavy and sluggish to be an effective hunter, a new study has shown that the Anteosaurus would have been able to outrun, track down and kill its prey effectively.

Despite its name and fierce appearance, Anteosaurus is not a dinosaur but rather belongs to the dinocephalians—mammal-like reptiles predating the dinosaurs. Much like the dinosaurs, dinocephalians roamed and ruled the Earth in the past, but they originated, thrived, and died about 30 million years before the first dinosaur even existed.

The fossilised bones of Dinocephalians are found in many places in the world. They stand out by their large size and heavy weight. Dinocephalian bones are thick and dense, and Anteosaurus is no exception. The Anteosaurus’ skull was ornamented with large bosses (bumps and lumps) above the eyes and a long crest on top of the snout which, in addition to its enlarged canines, made its skull look like that of a ferocious creature. However, because of the heavy architecture of its skeleton, it was previously assumed that it was a rather sluggish, slow-moving animal, only capable of scavenging or ambushing its prey, at best.

“Some scientists even suggested that Anteosaurus was so heavy that it could only have lived in water,” says Dr Julien Benoit of the Evolutionary Studies Institute at the University of the Witwatersrand (Wits University). 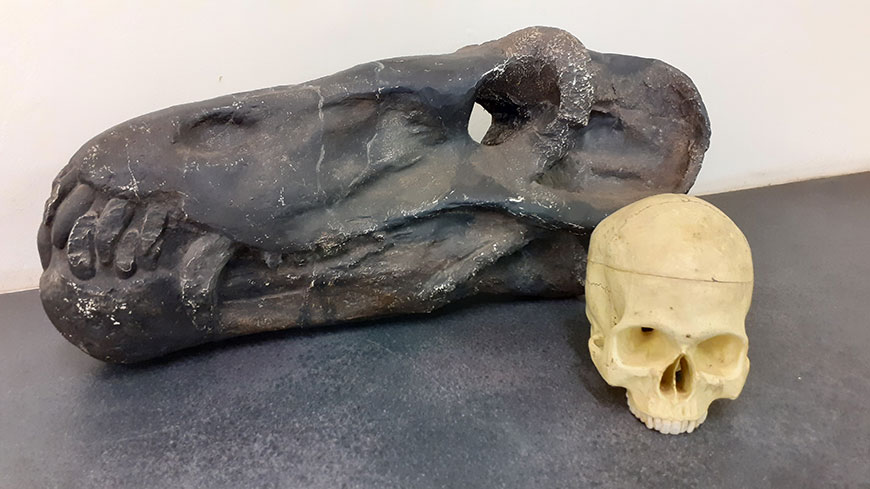 By carefully reconstructing the skull of the Anteosaurus digitally using X-ray imaging and 3D reconstructions, a team of researchers investigated the internal structures of the skull and found that the specific characteristics of its brain and balance organs were developed in such a way that it was everything but slow-moving.

“Agile predators such as cheetahs or the infamous Velociraptor have always had a very specialised nervous systems and fine-tuned sensory organs that enable them to track and hunt down prey effectively,” says Benoit. “We wanted to find out whether the Anteosaurus possessed similar adaptations.” 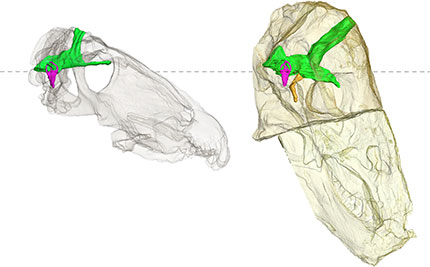 The team found that the organ of balance in Anteosaurus (its inner ear) was relatively larger than that of its closest relatives and other contemporaneous predators. This indicates that Anteosaurus was capable of moving much faster than its prey and competitors. They also found that the part of the brain responsible for coordinating the movements of the eyes with the head was exceptionally large, which would have been a crucial trait to ensure the animal’s tracking abilities.

“In creating the most complete reconstruction of an Anteosaurus skull to date, we found that overall, the nervous system of Anteosaurus was optimised and specialised for hunting swiftly and striking fast, unlike what was previously believed,” says Dr Ashley Kruger from the Natural History Museum in Stockholm, Sweden and previously from Wits University.

“Even though Anteosaurus lived 200-million years before the famous dinosaur Tyrannosaurus rex, Anteosaurus was definitely not a ‘primitive’ creature, and was nothing short of a mighty prehistoric killing machine,” says Benoit.