While models show a low risk of a third wave in South Africa, the country is still highly vulnerable.

An Artificial Intelligence (AI)-based algorithm that has been designed by the University of the Witwatersrand (Wits University) in partnership with iThemba LABS, the Provincial Government of Gauteng and York University in Canada, shows that there is a low risk of a third infection wave of the COVID pandemic in all provinces of South Africa. 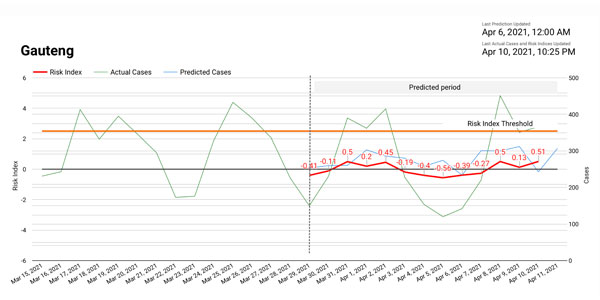 “These parameters are consistent with clinical public health measures that can contain, control and mitigate against the COVID-19 pandemic,” says Dr. James Orbinski, Director of the York University Dahdaleh Institute for Global Health Research.

“The current data shows us the risk for a third infection wave of COVID-19 is small across most of provinces in South Africa, but we still remain highly vulnerable,” says Professor Bruce Mellado, Director of the Institute for Collider Particle Physics at Wits University.

It is crucial that South Africans continue to adhere to the South African government’s COVID regulations and take all necessary precautions to prevent the spread of the pandemic.

The advent of infection waves is driven by circumstances that are difficult to predict and therefore to control. In this complex environment, early detection algorithms can provide an early warning to policy makers and the population. Early detection algorithms are able to issue an alert when the data displays a significant change that is consistent with the advent of a new wave.

The model is trained on the interim period in between waves one and two in all of the South African provinces. The algorithm was tested with data taken during the period of past peaks to evaluate its performance.

“AI technology provides us with invaluable potential to develop early detection and alert systems that are highly needed for rapid and dynamic decision making under risk and uncertainty under the current pandemic,” says Ali Asgary, Professor of Disaster & Emergency Management and Associate director of York University's Advanced Disaster, Emergency, and Rapid-response Simulation (www.adersim.info.yorku.ca)

AI is very effective in navigating through complex problems with a large number of parameters and dimensions, while at the same time learning from the data. Data hides within itself a wealth of information that AI can extract efficiently.

“Our team’s development of an early detection algorithm for the third wave speaks to the power of AI to generate data-based solutions to highly complex problems,” says Professor Mellado, Director of the Institute for Collider Particle Physics.

The project is supported by the Canadian International Development  Research Centre (IDRC) through the Africa-Canada Artificial Intelligence and Data Innovation Consortium.