Making sense of the numbers

Modelling pandemics might be an imperfect science, but it is the best that we have. 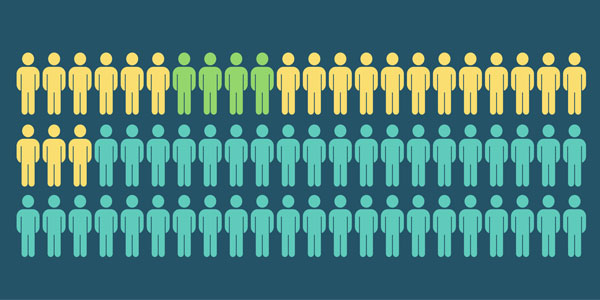 Imperfect-important may be the apt hybrid adjective for mathematical modelling that has taken a dominant role in how the world is trying to make sense of the unknowns of the novel coronavirus, SARS-COV-2, which causes Covid-19.

The strength of mathematical modelling is in tracking and projecting likely scenarios for the progression of the disease. Strong forecasting can help guide policy and decision-making to improve planning and ensure that limited resources are allocated efficiently.

The downside, though, is that any modelling by equations is only as strong as the data and numbers that get crunched. Extrapolation and analysis from projections can vary widely and be misaligned to realities. And

Covid-19 response is high stakes territory, not just in saving lives and limiting damage to economies and livelihoods, but also in how precedents and policies are justified. It deserves deeper scrutiny.

An ecosystem for inference

South Africa’s official modelling has largely been undertaken by the South African Covid-19 Modelling Consortium made up of researchers from the National Institute for Communicable Diseases (NICD) and Wits, Cape Town and Stellenbosch universities.

“The Epi Model seeks to capture the transmission dynamics of Covid-19 at a population level over time. This takes into account the disease severity and the treatment pathway that patients may encounter. This feeds into the Cost Model which represents the type, number and price of ingredients to cost responses.”

In May 2020, the consortium forecasted 40 000 deaths and a million infections nationwide by the end of November. By mid-October, the death toll stood at 17 863 and 693 359 recorded positive cases. The May modelling was used by the government to decide on hard lockdowns, including the still contentious bans on alcohol and cigarettes, as well as budgets for the procurement of personal protective equipment, building field hospitals and even importing the services of 217 Cuban doctors at a cost of a reported nearly half a billion rand to shore up the local emergency response.

On a provincial level, Professor Bruce Mellado, a physicist from the Wits School of Physics and iThemba Labs, has been part of the Gauteng Advisory Council that has informed the provincial response strategy.

Mellado says no model is ‘100% perfect’. He says modelling is set by parameters and is most efficient when there is accurate data and context within a strong ecosystem of epidemiologists, healthcare workers, clinicians, policymakers, data scientists and mathematicians.

“Any data is good, even if it is flawed, so long as you know where the flaws are and this comes from having the input of hundreds of people from different work streams,” says Mellado.

“Our job as modellers is to look at realities objectively and to try to understand the weakness and strength of data and to understand that the on-the-ground realities are complex. We correct, recalibrate, adapt and re-adapt the parameters of the model as we go along.”

Currently Mellado’s model is updated on a monthly basis and he has a core team of 50 people who work on the province’s Covid-19 dashboard.

For Professor Alex van den Heever, modelling a pandemic with its unknowns and variables has inherent shortcomings – too many to convey much useful information. He believes that projection models in particular are problematic.

Van den Heever, who holds the Chair of Social Security Systems Administration and Management Studies in the Wits School of Governance, says lack of transparency and ‘fiefdom-like’ control over the data and flow of information should be red flags.

“There just isn’t enough information for coherent projection – assumptions drive the results and there’s not enough evidence to show how interventions impact on a projection itself.

“Because of a failure to present granular information and the fact that information and data are hidden – or only accessible [to] those who sign non-disclosure agreements with government – means there’s limited access to information for empirical analysis.”

Van den Heever warns that when data and information flow is controlled it cannot be tested or challenged, and can be misused to give false legitimacy to government decisions, policies and precedents.

Graeme Götz, Director of Research Strategy at the Gauteng City-Region Observatory (GCRO) says making data more accessible and more specific is key to being able to geo-code (use data to pinpoint locations) or to tease out spatial patterns of how coronavirus spreads. A key lesson for a democracy is that information and data “cannot be militarised and removed from the public domain under the guise of protecting privacy – not under these circumstances”, he says.

Götz has been part of the data analytics research work stream in the Office of the Premier. Since March the Observatory has been mapping the pandemic with drilled-down framing that zooms in on specific risks and vulnerabilities. This includes understanding the impact on the elderly and on women, and evaluations of the households most affected by lockdown restrictions. Much of the data has been ward-level information.

Götz says it is specific but anonymous, meaning privacy is protected but allows for targeted and localised responses that could replace blanket hard lockdowns.

“Modelling is fine, but one really has to mine the data to better understand the patterns and draw conclusions from that,” he says.

Modelling and the flow of data has become an area of contestation in the coronavirus response. It can be a distraction from focusing on better strategies and resource allocation, says Professor François Venter, Divisional Director of Ezintsha.

Venter believes modelling in the main has been considered and consistent, although the timing of projections was inaccurate.

“We can’t cherry-pick the parts of data or a model to suit our own narratives. The models aren’t the problem, as much as our reactions to them are,” he says as a caveat.

Venter’s added warning is for greater vigilance. We should not allow the Covid-19 fight to be reduced to pitting sides against each other – including arguments of lives versus livelihoods; to the development of personality cults; or allowing state moralism and hypocrisy to expand off the back of controlled data.

Keeping more eyes on the ball is what will matter most because the virus is not yet done with the world.