Keeping an eye on the virus from the sky

Profile: When Covid-19 hit, 21-year-old Wits engineering student, Xolani Radebe, knew that he wanted to be part of the solution. 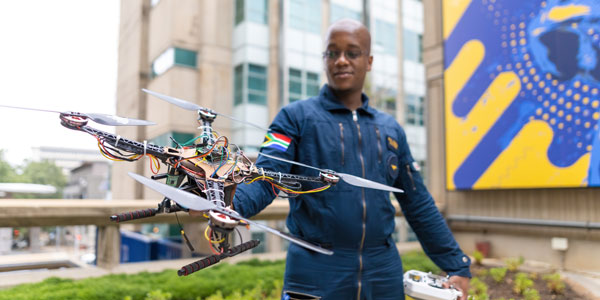 The third-year mechanical engineering student says that the drone, with a built-in thermal camera, can detect the body temperature of large groups of people in vast areas such as malls or other busy places.

“High fever has been said to be one of the symptoms of Covid-19. The drone is able to detect if anyone in a large gathering has an above-average temperature and can alert the drone operator,” says Radebe.

“The drone can also save time for those who are screening large groups of people in busy areas. Instead of screening each and every person, the drone can be flown to read the temperature of everyone in that area.”

The drone is a modification of an existing prototype designed by Radebe and his business partner, Tino Kurimwi, with whom he co-founded an aviation company in 2019. Radebe’s love for aviation and his aspiration to build airplane engines sparked his interest in drone development. Designing something that could fly was a step closer to his aviation career, he says.

Radebe has not always been a big dreamer. Growing up in a community where most young people are unemployed and were never afforded opportunities to study further, Radebe never imagined pursuing a career as an aircraft engineer.

“It is difficult to have a dream when people around you are not working or even studying further. There is no source of inspiration and this can be discouraging. You look at them and see yourself and wonder if you will turn out like them.”

Fortunately, a high school teacher ignited a flame of hope after Radebe nearly gave up on himself. Radebe says that Mr Ngwenya, his teacher from Letare Secondary School in Soweto, helped unearth his latent potential. A conversation with Ngwenya on the topic of purpose changed Radebe’s negative outlook.

“My high school teachers gave me a sense of purpose and gave meaning to my life. I had lost focus until Mr Ngwenya called me to order in Grade 11. Then I realised that I needed to change my ways and focus,” says Radebe.

Empowered with a vision and purpose, the drone designer began making an effort to achieve academic success. His interest in aviation was piqued after he found out about the field at a career expo.

“I developed a keen interest in aviation when I attended the Africa Aerospace and Defence (AAD) show. I had the opportunity to meet with the chief of staff of the South African Air Force at this show and at the 100 defence countdown.”

After receiving advice from a lecturer at Wits on whether to pursue mechanical or aeronautical engineering, he opted for the latter.

Radebe believes in advancing societal good and finds solving problems using his engineering skills gratifying. His motive in designing the drone was to provide solutions that could aid with some of South Africa’s social ills.

“Drones are solution based. Initially, we wanted to use the drone for crime detection purposes but we decided not to, for our own safety,” says Radebe. “Drones are able to serve multiple purposes. They can be used to search for missing people and to reduce the costs of using airplanes.”

He is proud that his innovation can make a positive impact, despite the costs that come with designing a screening drone. The drone’s thermal camera costs around R5 000 and the components to make the actual drone cost about R16 000 to R18 000, says Radebe. Although costly, he says the drone was not designed to generate revenue but to contribute to the fight against Covid-19.

“Uplifting people in my community is important to me. I want to give others the same opportunities that I have been afforded in life. I would not be pursuing engineering had it not been for the exposure from the youth development programme,” says Radebe, who currently works out of the Transnet Matlafatso Centre at Wits, where he is mentored and nurtured.

The charismatic youngster has encountered hurdles that threatened his ambitions and led to a mental breakdown. In his second year at Wits, Radebe failed and had to repeat his modules, which made realising his dreams seem almost impossible.

“It was very hard for me when I failed – to the extent that I suffered a mental breakdown. But knowing that this degree was a stepping stone for me to achieve my ambitions, I had to try again. I was fortunate to receive a lot of support from Mr Kholisile Khumalo, Chairperson of the Youth Development Programme at AAD. He encouraged me not to give up,” says Radebe, who is grateful that he is able to continue his studies thanks to his sponsor, Pioneer Foods.

Radebe, who refers to himself as ‘Gogo’s (granny’s) boy’ says that he endured the pain of failure and repeating his modules because he wanted to make his grandmother proud – she raised him from the age of 11 after his mother passed away. Radebe’s company, Rita Sibanyoni (RS) Aviation honours his grandmother. He hopes that RS Aviation will be the biggest drone company in Africa in future. For Radebe, the sky’s the limit.