A fleeting green moment in time

Scientists predict that an Age of Pandemics is imminent unless human beings change their ways. 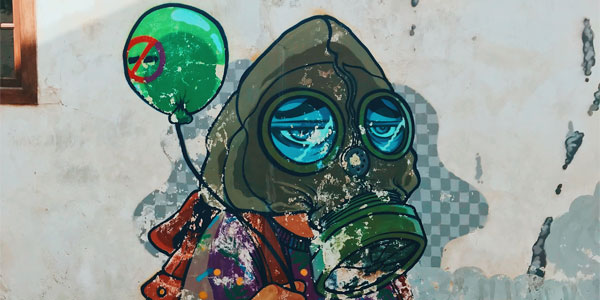 Hidden in a 78-metre long ice core recovered from a glacier in the Swiss/Italian Alps is the story of how humankind’s worst-ever pandemic improved air quality across medieval Europe.

From this core, a team of scientists were able to reconstruct air quality in Europe over the past 2 000 years. They did this by measuring the concentration of lead in the air.

They found that during the period 1347-1353, when the Black Death (a global epidemic of bubonic plague) killed possibly as many as a third of Europe’s population, lead concentration levels fell drastically.

The mass die-off meant the demand for lead fell. Lead dust that ended up in the air, from medieval smelters, dropped too.

Six-and-a-half centuries later, the SARS-CoV-2 pandemic has left its mark on the world’s air quality, after it shut down global industrial production and left most of the planet’s population under lockdown.

In the future scientists may use contemporary ice cores, and an array of other tools, to assess the impact that this modern pandemic had on the environment and the human race.

The Covid-19 pandemic is yet to leave us, and there is still so much to be learnt from its global impact. But what we do know so far, is that the virus has had a massive influence on the global climate.

Keep cool to carry on

To prevent an irreversible change in the climate system, according to the International Panel on Climate Change, we have to limit a global temperature increase to 1.5°C.

“For us to prevent a 1.5°C overshoot, we have to cut emissions by about 8% of 2020 levels, and we have to do so for every year for the next decade,” says Associate Professor Vishwas Satgar of the Department of International Relations at Wits University.

“Some people are suggesting that Covid-19 impacts have brought emissions down to between five and eight percent.”

What Covid-19 has also done, however, is provide us with a peek into a bleak imminent epoch, which is being called the Age of the Pandemics.

“We should be looking at these climate sensitive pandemics as something that could happen more frequently in decades to come,” says Associate Professor Jennifer Fitchett in Physical Geography at Wits.

Averting the age of pandemics

The Age of Pandemics is likely to be driven by climate change, deforestation and a growing human population that will in the future come into more and more contact with deadly, still unknown pathogens.

Scientists have already proposed a way for stopping future pandemics. In a paper in the journal Science, scientists called for the introduction of a number of measures to prevent viruses from emerging from tropical forests and jumping species.

These measures include arresting deforestation through improving the lives of people who live in forested areas, introducing better legislation to preserve forests, and curtailing the wildlife trade in bushmeat through better patrolling, to bring an end to wet markets. The authors suggest that measures should be put in place to prevent people from going into forests to prevent human contact with deadly pathogens.

While protecting us from new potential emerging viruses, these measures will in the long term provide better protection for the globe’s fauna and flora.

These efforts are estimated to cost between R363 billion-R495 billion a year to implement. However, this is a drop in the ocean compared to the tens of trillions of dollars that the Covid-19 pandemic is believed to have cost globally.

Satgar believes that we need to use the Covid-19 pandemic and its convergence with multiple crises to develop a paradigm that transforms societies to deal with the systemic drivers of these crises.

For instance, many countries in their efforts to rebuild in the aftermath of the pandemic have committed to green deals, where nations will invest in renewable energy sources and commit to reversing climate change.

But while South Africa has introduced stimulus packages to fire up the economy, little or nothing has been said about investing in a green economy. In the short term, the government wants to use tourism to stimulate the economy. However, Satgar points out global tourism is responsible for massive spikes in emissions because of the airline industry.

“It is a difficult one, because tourism certainly has been a very important economic sector for us, and so it is very much the way to kick-start an economy. However, there is also a large concern about the role of tourism and travel in the spread of Covid-19,” says Fitchett, who has studied the effects of tourism and climate change in South Africa.

Professor Bob Scholes of the Wits Global Change Institute says the Covid crisis should be used as an opportunity to change the direction of the economy.

“I do see an alternative narrative, where we have massive injections of stimulus and we can use this stimulus to take us on a track to transform the economy into a green economy.”

While critics may complain that it would take too much to place the economy on such a footing, the pandemic has shown what humankind can do when in a crisis.

“You know when we really get together and finally grasp the nettle, we actually can achieve remarkable things,” says Scholes.

However, the problem with pandemics is that their positive effects on the environment are often fleeting. This is seen in that same Alpine ice core that revealed how the Black Death cleaned up those medieval skies, 650 years ago.

Just a couple of years after the plague swept through Europe, the concentrations of lead were increasing and returning to the levels that they were before the Black Death appeared.

Today, pollution levels are once again on the rise and the gains made are soon to be wiped out.

“If we stay on this trajectory of business as usual, we are going to see the full-blown social and ecological collapse of systems,” warns Satgar.

Is the environment right for a second spike?

While Covid-19 has had an effect on the environment, the inverse is also true. Natural cycles have an impact on the virus and South Africans might see this effect in autumn 2021.

Researchers from Wits’ GCI and the School of Geography, Archaeology and Environmental Studies have been assessing whether there are any environmental or seasonal components to the Covid-19 outbreak. They believe there most likely are.

The team found that the SARS-CoV-2 virus, which causes Covid-19 disease, might start following a seasonal cycle, where there will be a rise in infections in the winter months.