Humphry Tlou, a physics PhD student at Wits, is one of two students to be awarded with the CERN ATLAS PhD grant.

Tlou hails from the small town of Mokopane in Limpopo and is currently undertaking his second year doctoral studies in physics at Wits. He contributes to the ATLAS Experiment at the European Organization for Nuclear Research (CERN) in Geneva, Switzerland. His contribution is to ATLAS physics analysis and the upgrade and maintenance of the ATLAS detector – the largest, general-purpose particle detector experiment at the Large Hadron Collider (LHC), a particle accelerator at CERN.

Tlou is one of the two students to be awarded the ATLAS PhD grant of 2020. This award was initiated by Fabiola Gianotti, the Director General of CERN, and Peter Jenni, the founder of the ATLAS experiment, following their award from the Fundamental Physics Prize Foundation in 2013. The ATLAS experiment currently hosts over 1 200 PhD students.

The grant aims to encourage and support high-calibre doctoral students in particle physics research from all over the world, allowing them to obtain world-class exposure, supervision, and training within the ATLAS collaboration. Reflecting the international character of CERN and the ATLAS Collaboration, there has been 16 nationalities present among the recipients of the ATLAS PhD Grant. Now, South Africa joins Argentina, Armenia, Australia, China, Ecuador, Germany, Italy, Morocco, Nepal, Palestine, Portugal, Russia, Serbia, Sweden, UK and Zambia. 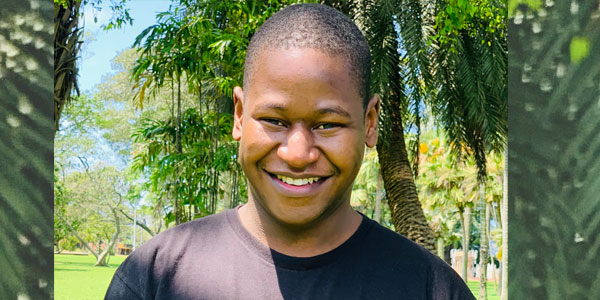 “I am looking forward to contributing more towards the research and advancement of technology,” says Tlou.

He holds a BSc in Nuclear sciences and engineering, BSc(Hons) in Physics and MSc in Physics, all from Wits. He currently works on detector hardware, and physics analysis under the Wits Institute for Collider Particle Physics (ICPP), in collaboration with the ATLAS community.

Tlou has been supported by the SA-CERN program, which is hosted by iThemba LABS from the National Research Foundation, and the Department of Science and Innovation.

“We are very proud that a member of our ICPP has received such a competitive international accolade. It is also speaks to the international recognition that the field of collider particle physics in South Africa is receiving,” says Professor Bruce Mellado, Director of the ICPP in the Wits School of Physics and a senior scientist at iThemba LABS.

Tlou’s research work for detector hardware, focuses on implementing the data acquisition software for the ATLAS  Local Trigger interface Module of the Tile Calorimeter (TileCal), in preparation for Run 3 data taking period, which is scheduled to start in early 2022.

His contribution in the detector work has allowed him to continue acquiring high tech skills and numerous roles within the ATLAS TileCal group. He is also conducting physics analysis in the Higgs to ZZ channel, where the studies focus on searching  for heavy resonances, produced via gluon-gluon fusion and decaying to 4 lepton final states, in association with the missing transverse energy.

Humphry has been involved in the ATLAS activities since 2015, as an undergraduate student, under the supervision of Mellado. Since 2017, he was able to travel to CERN, where he has taken part in TileCal operations.

These operations included TileCal test beam upgrades, where he carried out software development tasks and data-taking shifts; and ATLAS Calo/Fwd shifts, where he monitored real-time data-taking. He gradually assumed more advanced roles, such as Data Quality Leader, Data Acquisition on-call expert and in 2019 was appointed as the TileCal Run Coordinator.

As the Run Coordinator, he coordinated the hardware maintenance and software teams, leading the work, to achieve successful maintenance and daily operations during the long Shutdown 2 period (a two-year period of upgrades and maintenance of the detectors).

He currently manages the TileCal Online software, where he develops, updates and builds the software against the latest Trigger and data acquisition software release.