The two students have also been awarded highly competitive fellowships for their outstanding work.

Two students from Wits University’s High-throughput Electronics Laboratory within the Institute for Collider Particle Physics (ICPP), doing their research work for the Tile Calorimeter of the ATLAS Detector have been appointed to take up leadership roles within the ATLAS experiment at CERN. 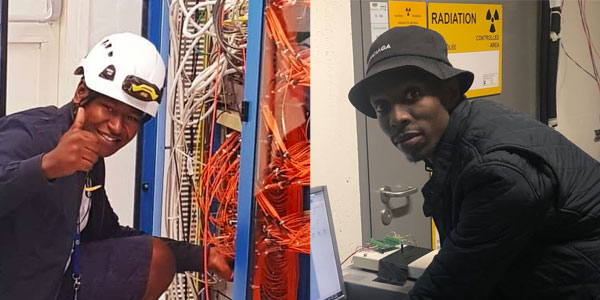 The two students have also been awarded highly competitive fellowships for their outstanding work, which supports and encourages high-calibre doctoral students in research allowing them to obtain world-class exposure, supervision, and training within the ATLAS experiment.

Edward Nkadimeng, a doctoral student in the Wits School of Physics, has been appointed by the management of the ATLAS experiment at CERN to lead a community of physicists and engineers in 26 institutes from the USA and Europe.

This international team is expected to deliver critical electronics for the high luminosity upgrade of the ATLAS detector. The Low Voltage Power Supply (LVPS) will power the future on detector electronics and is one of the components that is being re-designed. These electronics will also be manufactured and assembled in South Africa.

Edward’s role among other responsibilities, will be to support operations and specialised testing of various components. He will also organise the LVPS system and Detector Control System working groups to meet the next challenges of the high luminosity Phase-2 upgrade.

Edward is now a recipient of the prestigious 2020 Southern African Institute for Nuclear Technology and Sciences (SAINTS) fellowship from iThemba LABS of the NRF.

Humphry Tlou, a second year physics PhD student at the Wits School of Physics, is also the ICPP coordinator for maintenance and operations. Humphry contributes to ATLAS physics analysis and the upgrade and maintenance of the ATLAS Tile Calorimeter (TileCal).

Humphry is currently the TileCal Data Acquisition expert, where he develops and maintains the TileCal online software. He has served as the Data quality leader, where he led the operational data quality activities and was appointed as the TileCal Run coordinator in 2019.

His role is to facilitate the smooth running of the maintenance and operations during Long Shutdown 2 (a two year period of upgrades and maintenance of the detectors) at CERN. This role includes communicating efficiently with various teams, within the TileCal community and the ATLAS Run coordination team, as well as to chair the TileCal weekly meetings.

Humphry is also a recipient of the 2020 PhD SA-CERN Excellence Scholarship.

“These appointments are a demonstration of South Africa’s ability to play leading roles in top-notch international projects and are an epitome of world-class and inclusive excellence, where new scientists are being trained to become leaders,” says Professor Bruce Mellado, director of the Wits ICPP and a senior scientist at iThemba LABS.