Pay close attention the next time you play a Bach concerto to your pet crocodile. If you look closely, you might just see him tapping his toes to the rhythm.

It is true. Crocodiles react to the complex frequencies heard in music such as classical music. This means that, just like mammals and even fish, they have a hierarchical way of processing sensory stimulus, enabling them to navigate their way through the world they live in.

“Their hierarchical processing has been retained from earlier vertebrates over millions of years,” says Dr Brendon Billings, a Senior Lecturer in the School of Anatomical Sciences. This process follows a conserved approach to evolution and simply put: “If something works in nature, there is no reason to change it.”

Billings researched the underlying neuronal processing which enables crocodiles’ ability to perform complex behaviours, as part of his PhD in anatomical sciences. The idea was to find out what inner workings in the brains of these reptiles can match the complexity in behaviour identified in the wild and in captivity.

“When you look at animals, you ascribe a certain level of intelligence to them, due to the level of complex behaviour they perform, such as communication, the use and manipulation of tools, or playing,” says Billings. “Chimpanzees, for instance, manipulate twigs to fish termites out of the ground, while crows have been shown to outperform non-human primates in behavioural studies.”

Pigeons, for example, will work tremendously hard for a reward during behavioural experiments. Crocodiles, however, don’t do that. Due to their cold-blooded nature, crocodiles are a lot more cryptic in their behaviour than their warm-blooded counterparts as they are more concerned with conserving energy. 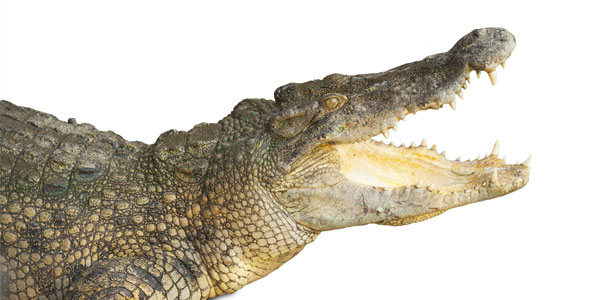 When crocodiles are not skulking about in muddy waters, looking for something to snap at, they lie about in the sun, warming their cold-blooded bodies. Their seemingly inactive lifestyle means that they get the short end of the stick when it comes to recognition of their intelligence. However, they have been seen to display complex behaviour, both in the wild and in zoos. For instance, they have been seen to collect twigs on their snouts, tricking birds into thinking the twigs are worms. When the birds come to investigate … snap!

“This behaviour shows a level of complexity. It means they are rationalising that if they perform a certain action, they might get a certain reaction.”

Intelligence is highly dependent on an animal’s sensory system. Billings and colleagues from Ruhr University Bochum, Germany, explored crocodiles’ ability to make sense of their environment by performing functional magnetic resonance imaging (fMRI) scans on crocodiles, while providing them with sensory stimuli, such as sounds and visuals. fMRI measures activity in the brain by assessing the levels of oxygen and carbon dioxide (CO2) in the brain. The brain requires energy in the form of oxygen to function, the by-product of which is CO2. This ratio of O2/CO2, represented in the form of a heat map, demonstrates in real time areas of activation within the brain. When the crocodiles were stimulated with certain sounds at different frequencies, very specific regions within their brains lit up on the fMRI scans.

The team’s experiment is unique and has never before been done on a cold-blooded animal. While the members of the German laboratory are experts on doing similar tests on birds, they have never worked with a crocodile.

Birds and crocodiles share the same sensory patterns, and the areas where sounds are processed in the brains are localised in the same areas. The experiment did pose some challenges, however, as the right size crocodile had to be found, and the team had to work with extreme care to make sure it stayed comfortable.

“Firstly, you have to make sure that the animal fits in the scanner, so it has to be a small crocodile. Then, you have to keep it comfortable during the session and keep the temperature just right.”

If the crocodile gets too cold, brain activity diminishes and it becomes paralysed. On the other hand, if it is too hot, the animal becomes too active. It needs to be absolutely still in the scanner to avoid false readings. Optimisation of the technique took some time. After a lot of trial and error, the team found what they were looking for.

“This version of information processing has been conserved over millions of years and can be found across vertebrates. However, more studies are needed to pinpoint exactly where in the brain of reptiles complex behaviours reside.”