Music is thought to be one of the ways that our ancient ancestors expressed their emotions – and may well have led to early languages. 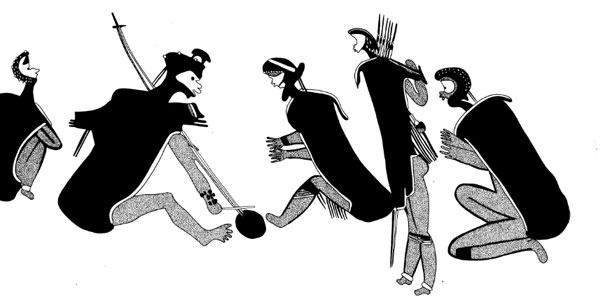 At Matjes River cave in the Eastern Cape the discovery of a flat piece of bone, with a hole bored through it, has provided an earpiece into the deep past.

Careful examination suggested the bone was part of a bullroarer, also known as a Goin!goin. The archaeologists believed they had found one of humankind’s oldest musical instruments in South Africa. Bullroarers are almost universal, with a number having been found in Europe, Asia, India, the Americas and in Australia.

The Australian Aboriginal people have been known to use bullroarers in ceremonies and as a form of communication.

“A bullroarer is an oblong object, with a single hole in it, and then you put a string through it and you whirl it above your head, which is quite difficult to do,” explains Professor Sarah Wurz, from the Wits School of Geography, Archaeology and Environmental Studies. “It makes a whirring sound but a rhythmical one. It is almost like the sound of bees.”

To find out if this piece of bone was in fact a bullroarer, Wurz and her team had to make one themselves. They built a replica from bone. It turned out that their hunch was correct. They started experimenting with all types of bullroarers.

“We have done some experiments with them at Klasies River Mouth and we have found that if you swing a lot of them together they make a very interesting and unearthly sound. If you do it in a cave, the sound is amplified,” says Wurz.

“You might argue, that this is not necessarily music, but it is using sound in a rational way to communicate something, possibly for ritual.”

The moods and emotions of the Stone Age hunter-gatherers who made those bullroarers and other stone tools are not reflected in the archaeological record. However, Wurz thinks music, or the making of sound, is the closest we might get to seeing our ancestors express their emotions.

To understand why and how our ancestors made music, Wurz established the Archaeological Transfrontier Music workgroup.

She and her team are scouring archaeological cave sites like Matjes River and Klasies River looking for the remains of musical instruments. Besides the bullroarers they have found other possible musical implements.

“At Matjes River, for example, we have found what we believe are 9 000-year-old flutes or whistles,” says Wurz. To test if they are in fact musical instruments, the team is in the process of making replicas which it plans to play.

The bullroarers have been dated as 9 000 years old, although Wurz hopes to one day find musical instruments with even older dates.

“Where we are excavating at the moment, we find ochre, we find bone tools, we find a whole array of human-like instruments, or implements, so I would really not be surprised to find [musical instruments] this far back. But you have to remember objects don’t preserve as well, when you go that far back.”

Archaeologists from Wits University have found the first examples of art-related objects from 100 000 years ago at Blombos Cave.

The oldest musical instruments so far come from Europe. Here 40 000-year-old bone flutes were excavated in caves in the Swabian Alb region of Germany. The flutes were made from bird bone, mostly vulture and swan.

Music, some believe, has played an important part in humankind’s cognitive evolution. Anthropologist Steven Brown has suggested that before language emerged, our ancestors had a sing-song, rhythmical way of speaking. This he coined as the musilanguage.

The problem Wurz has in her search for musical artefacts is that most do not survive the passage of time. Only bone and rock survive.

Another discipline has provided science with a peek into how humankind was making music in the past. Paintings that show the San people presumably making music have been found in rock shelters in the Eastern Cape.

“We’ve got musical instruments, but we don’t know exactly how old they are,” says Professor David Pearce, Director of the Rock Art Research Institute at Wits. “In the Eastern Cape Drakensberg, where I work, we’ve got several paintings of musical bows.

Musical bows are played by tapping the string with a stick. They are still used by the San today.

The art itself, says Pearce, is closely linked to music. “From the ethnography we know that the art goes very closely with the trance dancers, and those dances involve music in the form of clapping and singing.”

Recently, the Rock Art Research Institute has begun dating rock art sites. In the area where the  musical bows were found, some of the art dates back 3 000 years. The Institute wants to date more sites.

Ultimately, says Wurz, the understanding of how hunter-gatherers made music requires us to step away from our own modern-day perceptions.

“So, when you go into this in an academic way, you have to unpack what you mean by music,” says Wurz. “Certainly, music in its origins is very different from our western concept of a concert. We listen to an orchestra or to a band and that’s it. Back then music was something within which everyone partook.”