The feminisation of madness is persistent and pervasive as are forms of Othering across societies. 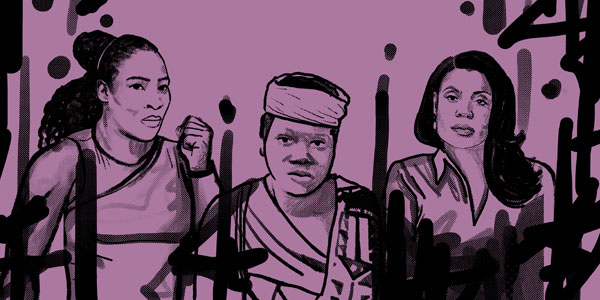 ‘Hysterical’, ‘over-emotional’, ‘delusional’, ‘shrill’, ‘the bridezilla’ – ‘madness’ has always come with loaded synonyms, disdain and more often than not, a distinct feminine association. Pull a thread through history, culture and across disciplines and it becomes clear that ‘madness’ has conveniently been deployed to write off women, diminish them and to pathologise their emotions.

The idea of women as the weaker sex gets an early start in the biblical creation story of Adam and Eve. It’s Eve who goes off script and is tempted by the slinky devil serpent bearing the gift of knowledge in a poisoned apple. In Shakespeare’s Hamlet, there’s Ophelia, beautiful and doomed to literally drown in her madness.

Outside of fiction, there were the Salem witch trials in the United States in 1692 that ended in the hanging of ‘possessed’ women condemned and cast out as witches. In 1880, hysteria as a clinical condition was described as an affliction unique to women. Here in our own neck of the woods, there was Xhosa prophet Nongqawuse, whose visions and prophecies sparked the Cattle Killings of 1856. She would be dismissed as delusional, as troubled by the wild fantasies of a teenage girl maybe undergoing thwasa (the transition to become a diviner or healer), or unstable and moody with the hormonal cocktails of adolescence.

In modern times, ‘madness’ as a gendered weapon is everywhere in politics and media. Donald Trump in 2018 lashed out as his former aide, Omarosa Manigault Newman, calling her ‘wacky and deranged’ and a ‘crazed, crying lowlife’, after she wrote a tell-all book on the US president.

That same year, tennis icon Serena Williams was fined, then booed and ridiculed by detractors including the Twittterati and an Australian cartoonist, for arguing with the umpire during the US Open. Her pushback was seen as irrational, petulant and emotional – code really for going a bit crazy.

Dr Danai Mupotsa, Senior Lecturer in African Literature at Wits, says the “feminisation of madness is giving minority status to something or showing a deficiency, a lack of something”.

“Madness is a metaphor for the status of someone who is an outsider of normative value or structure,” says Mupotsa. It deserves challenging, and one-way scholars and thinkers can do this is to interrogate how ‘the invention of humanness’ from the Enlightenment comes to be the all-encompassing standard, but is hopelessly narrow and exclusionary, she says.

Adopting a wider range of world views is essential, says Mupotsa. For example, allowing for the understanding that something like thwasa is a gift, not a problem, as well as the inclusion of minorities, be they black, queer or women who are historically under-represented.

“When we do this the single view comes apart and we start to recognise that there are many ways of seeing that things are not this or that; they can be many things at the same time,” she says.

Mupotsa goes further to say madness can also be a standpoint – it can have agency. Going against the grain holds a key to finding expression, to deepening activism or advocacy, to actually have something to say.

“Many people are neuro-divisive; we have a broad range of how we manage mood, our level of temperament and our affectations.” Neurodiversity is the idea that brain differences are normal, rather than deficits. “We should also be thinking about the structure of our lives that are maddening and the fact that women in particular are constantly juggling multiple roles in life,” she says.

Professor Sumaya Laher, Head of the Psychology Department at Wits, agrees with the need for broader framing and contextualised understanding of how madness is diagnosed, thought about and written about. It needs the inclusion of indigenous knowledge and an Afro-centric framing.

“It is clear that over the years madness has been used as a form of control and power to subjugate women, to suggest that the feminine is emotional and irrational while the masculine is the rational, thinking self. This has also extended beyond gender to race and class and led to modern understandings of pathology,” says Laher. “We need a cultural understanding of what pathology is and how this is shaped by political forces, not just what fits into a traditional diagnostic manual or tool.”

Upending the way things have always been done is a tall task, but it is certainly not new for scholars and researchers, says Professor Pamila Gupta of the Wits Institute for Social and Economic Research (WISER). “History has been largely written by men, and researchers have been aware of this for a very long time and continue to challenge this as the norm,” she says. “The idea that women are the second sex, are irrational, biologically weaker, that they have periods that men have no clue about, is a way of men containing women. It is using madness as diseases, something dirty, taboo – and this becomes a form of othering, distancing and isolating.”

‘Show them what crazy can do’

Gupta draws a parallel with how the world is trying to understand the Covid-19 pandemic. She says the madness of women as other, as a form of disease, is now playing out “through the madness of a race as other”. It is the rise of Sinophobia and anti-Asian sentiment, including targeting “the madness of food habits” of some Chinese people, because the disease is believed to have come from a wet market in China. In turn, reports out of China as the country emerges from the pandemic, tell of incidents of racism and xenophobia targeting black Africans living in China.

Researchers and scholars continue their work because the feminisation of madness persists and pervades, so does othering in all its forms across societies and in a world that fractures easily when it is reactionary, fearful and plunged into uncertainty and anxiety, as it is now in a time of pandemic.

The counter-push is as necessary as ever and it may just show that madness is not the problem after all. Serena Williams’ Dream Crazier Nike advert sums it up: “If they want to call you crazy. Fine. Show them what crazy can do.”