Can tech save our sanity?

Promising technological and online innovations could be crucial in combating the world’s alarming mental health statistics. 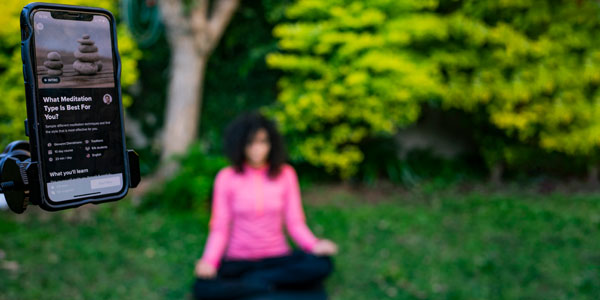 It’s tempting to blame rising global depression and anxiety statistics on the concurrent advances in technology, and our reliance on it in our everyday lives, but would you blame a stab wound on the knife?

Adam Pantanowitz, a biomedical engineer and Lecturer in the School of Electrical and Information Engineering, says although we need to recognise the dangers of some technologies and their potential to erode mental health, it’s important to not blame a mere tool for its effects on the user.

“Certainly, several studies have looked at, for example, social media’s negative impact on self-esteem, and such aspects need to be managed. On the other hand, there are several apps available to help manage mental health problems. You can use your smart phone to do a guided meditation, or it can become an avenue for cyber bullying. It’s really important to discern and understand these differences,” says Pantanowitz.

It’s also important to note there is not yet a clear picture of the effects of technology on our lives and mental health. Because technology isn’t evolving at a linear rate, but in exponential proportions, it’s difficult to fully gauge its effect on mental health in long-term studies.

At this stage, for example, largely anecdotal evidence suggests that the use of technology is interfering with the human attention span – specifically, our ability to attend effectively, says Professor Kate Cockcroft, division leader of cognitive neuroscience at the Neuroscience Research Laboratory (NeuRL) in the School of Human and Community Development. “But it’s really difficult to get firm evidence on such topics because of the influence of several [psychological, environmental and other] variables on such studies."

When good news does make the headlines, however, it’s overwhelmingly promising. In 2017, the Brainternet project, led by Pantanowitz, made headlines worldwide when it streamed brainwaves onto the internet from a portable electroencephalogram (EEG) device worn on a person’s head. Brainternet converts the EEG signals, or brain waves, to an open source live stream in real time. The possibilities of this tech are jaw-dropping.

“It could open up new intervention and treatment avenues for epilepsy, for example, by potentially diagnosing the condition remotely or monitoring brain waves to predict seizures. Or it could become a way to understand a person’s brain and mental state, with the potential to diagnose conditions such as depression much earlier on, before the symptoms become overwhelming,” says Pantanowitz.

Though the tech is in its infancy – Pantanowitz says other imaging modalities would be needed in combination with Brainternet for these applications – its potential in the fields of neuroscience and behavioural science is thrilling.

Pantanowitz is also in the process of co-founding a therapy app, which would allow therapists to interact with patients remotely via text or video calling. The app, called Reach, is still in its early stages, but could  be a game-changer for millions who don’t have access to conventional treatment.

Then, there’s the promising potential in the realm of e-learning. Paula Barnard-Ashton, Senior Lecturer in the School of Therapeutic Sciences and Manager of eFundanathi (Learn with Us), the Wits eZone e-learning platform, says her research has shown that online learning can have a positive effect on students’ mental health. “An online learning platform embedded in a curriculum gives students a better understanding of their own progress, as they’re involved in the curriculum instead of just being ‘talked to’ in a class. This makes students feel connected and gives them a sense of security, helping with stress management.” Her research, over six years, also shows that e-learning has a positive effect on lecturer confidence, improving stress management and burnout in the long term.

Of course, if used incorrectly, even ‘good tech’ can go bad. Cockcroft uses the example of tech in the classroom – beneficial when used correctly, distracting when not. “Attention needs to be understood as a limited resource. We don't have unlimited attentional resources [or] a protective mechanism that prevents us from being overwhelmed by the vast amounts of information bombarding our senses. So, we constantly filter and select what to allocate our attentional resources to.”

Cockcroft says the extent to which we can divide our attention and therefore multitask depends largely on two factors: How well versed a person is in each task, and the senses involved. “A learner driver, for example, will find it difficult to focus on anything except the process of driving. But after many hours of practice, the process becomes automatised, using fewer attentional and cognitive resources and enabling us to hold a conversation over Bluetooth. If the sensory input is different, multitasking is also easier – such as driving (vision) while listening to the radio (hearing). But if the complexity of one task changes, for example, the road is unfamiliar, we need to devote more attention to it and subsequent attention to the radio or conversation drops off.”

In the classroom, she says, many students assume they can work on an assignment or paper on their laptop, and simultaneously listen to someone talking. “But if you are dealing with complex verbal information in both instances, this is highly unlikely. Scanning through photos on Instagram (vision) while listening to a lecture (hearing) may have minimal attentional interference, however – even though it's not acceptable behaviour!”

Hassem says online diagnostic tools should be used with caution. “People should avoid using pop-psychology tools. These are often not developed by experts and could provide inaccurate results, causing further distress to a patient. Mental health screening tools developed in a different country should also be used with caution. International depression screening criteria, for example, are heavily focused on the psychological symptoms of depression, while research indicates that South Africans may experience more physical than psychological symptoms of depression.

And, of course, online tools do not (at this stage) allow for a formal diagnosis. It should just be used as a starting point before visiting a qualified mental health practitioner.”

New technology popping up left, right and centre, creates a legitimate risk, says Pantanowitz. “Now, and as time goes on, users will need to become more discerning about the technology they use, what they use it for, and how they use it. Always look for authoritative sources and be responsible when sharing information. Empower others by leaving a bad review on unscientific apps, for example.”

In the long term, fascinating changes could be on the horizon, says Cockcroft. “Repeated use of technology is likely to change how our brains work in the long term. For example, the skill of reading has changed how our brains are set up. We did not have dedicated brain areas for word recognition and other aspects related to reading before humans were literate. Even today, the brains of literate and illiterate people are different. The same is likely to happen with the use of various technologies, and we may become more efficient at using these in the future.”

An African algorithm for mental health

Dr Lucienne Abrahams, Director of the LINK Centre (Learning Information Networking Knowledge), an interdisciplinary academic hub at Wits Tshimologong Digital Innovation Precinct, says one of the key advantages of digital technology, in any sector, is it can be used to provide existing services in ways not previously possible. “In African countries, where many people do not have access to public mental health services, this benefit may simply be access. In the case of mental health screening, or in the case of the treatment of less severe mental health disorders, public health officials and facilities would be able to reach a larger population using digital tools, including social media and other smartphone and online applications.”

But access to technology is a challenge for many population groups, and so is access to information. “While many mental health applications exist, few people would be aware of them and fewer would have access without the direct intervention of public health authorities. Most importantly, literature suggests that digital applications for mental health operating outside of a broader treatment regime with a formalised professional support network are risky, or ineffectual, or both.”

Clearly, more local research is needed. “Very limited research has been done in Africa about the effect of technology on mental health. Public authorities would need to be engaged in long-term research to ensure that the digital technologies and applications that they promote are low-risk and effective.”