Despite Covid-19, Wits students won second place with their applications to aide analysis of Covid-19 data in the competition held online for the first time.

Students in the School of Computer Science and Applied Mathematics (CSAM) and the School of Electrical and Information Engineering (EIE), nabbed a well-deserved second place at the 2020 final leg of the International Supercomputing Competition (ISC) Student Cluster Competition.

The Student Cluster Competition is open to all students in South Africa, and to students from universities globally.

The international finals have on average 82 university students from 11 countries competing to reign as world supercomputing champions. Since its inception seven years ago, South African students have dominated the ISC Student Cluster Competition and made it onto the podium in every single leg of the competition.

Here is a brief look at Wits’ track record:

With this heavy legacy to live up to, the Wits teams prepared to dominate in the 2019 leg of the Student Cluster Competition.

The teams consisted of four undergraduate students from the Computer Science and Applied Mathematics (CSAM) and one student from the School of Electrical and Information Engineering (EIE) who spent endless hours in a specially prepared venue provided by TW Kambule Mathematical Sciences Laboratories.

These hard-working students paved the way to the regional finals and were tasked with designing a low budget cluster with a R190 000 budget constrain.

In true Wits fashion the students overcame all obstacles before them and won the regional competitions thrusting them further into the final leg of the country wide competition.

With the team having earned the right to represent South Africa on the world stage, the Witsies dominated the Centre for High Performance Computing’s (CHPC) national team. However, due to the Covid-19 pandemic the competition could no longer be held in Germany and the international finals were moved online. 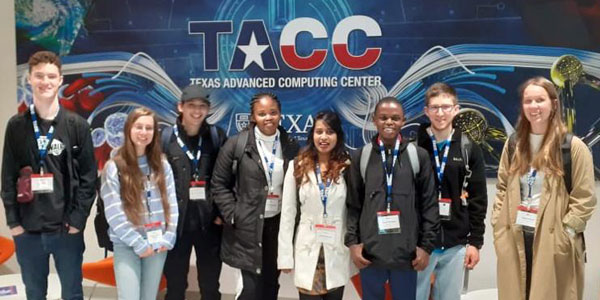 The rules of the international leg need each participating country to have 6 members and 2 reserve members. The South African team consisted of:

Moving online meant all the work that went into preparing a cluster for the finals had to be shelved and the team had to adapt to a new focus on a display of skills using the same resources as everyone else.

The virtual stage was prepared and the tasks were given: students had to optimise resource heavy applications that aided with analysis of Covid-19 data in real time and the effects of global warming around the world (Tinker HP and Elmer/Ice respectively).

To make the competition even more exciting the judges threw in two additional challenges to see if the students could adapt to the field’s ever-changing terrain, an advanced coding challenge and the creation of an Artificial Intelligence.

Thanks to the many hours of training with Avraham Bank (teaching and training coach) and the coordination of Brian Maistry (MSS HPC and Cybersecurity coordinator) the Wits students managed to secure a second place finish.