I can’t reach with the screwdriver, please pass the laser!

Researchers have demonstrated the world’s first metasurface laser that produces “super-chiral light”: light with ultra-high angular momentum. The light from this laser can be used as a type of “optical spanner” to or for encoding information in optical communications. 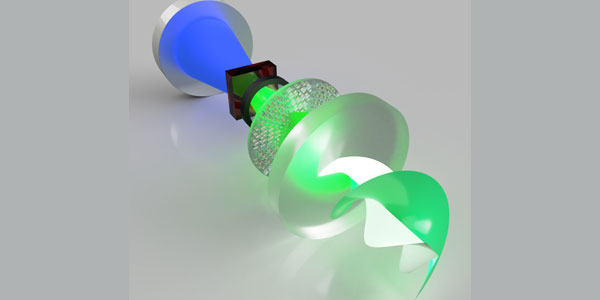 “Because light can carry angular momentum, it means that this can be transferred to matter.  The more angular momentum light carries, the more it can transfer.  So you can think of light as an ‘optical spanner’,” Professor Andrew Forbes from the School of Physics at the University of the Witwatersrand (Wits) in Johannesburg, South Africa, who led the research. “Instead of using a physical spanner to twist things (like screwing nuts), you can now shine light on the nut and it will tighten itself.”

The new laser produces a new high purity “twisted light” not observed from lasers before, including the highest angular momentum reported from a laser. Simultaneously the researchers developed a nano-structured metasurface that has the largest phase gradient ever produced and allows for high power operation in a compact design. The implication is a world-first laser for producing exotic states of twisted structured light, on demand.

The laser design is made possible by the complete control offered by new nanometer-sized (1000 times smaller than the width of a human hair) metasurface – designed by the Harvard group – within the laser. The metasurface is made up of many tiny rods of nanomaterial, which alters the light as it passes through. The light passes through the metasurface many times, receiving a new twist everytime it does so.

“What makes it special is that to the light, the material has properties impossible to find in Nature, and so is called a “metamaterial”  – a make-believe material.  Because the structures were so small they appear only on the surface to make a metasurface.”

The result is the generation of new forms of chiral light not observed from lasers until now, and complete control of light’s chirality at the source, closing an open challenge.

“There is a strong drive at the moment to try and control chiral matter with twisted light, and for this to work you need light with a very high twist: super-chiral light,” says Forbes. Various industries and research fields require super-chiral light to improve their processes, including the food, computer and biomedical industries.

“We can use this type of light to drive gears optically where physical mechanical systems would not work, such as in micro-fluidic systems to drive flow,” says Forbes. “Using this example, the goal is to perform medicine on a chip rather than in a large lab, and is popularly called Lab-on-a-Chip.  Because everything is small, light is used for the control: to move things around and sort things, such as good and bad cells.  Twisted light is used to drive micro-gears to get the flow going, and to mimic centrifuges with light.”

“Chirality” is a term often used in chemistry to describe compounds that are found as mirror images of one another. These compounds have a “handedness” and can be thought of as either left- or right-handed. For example, lemon and orange flavours are the same chemical compound, but only differ in their “handedness”.

“Controlling light’s chirality at the source is a challenging task and highly topical because of the many applications that require it, from optical control of chiral matter, to metrology, to communications,” says Forbes. “Complete chiral control implies control of the full angular momentum of light, polarisation and OAM.”

Because of design restrictions and implementation impediments, only a very small subset of chiral states has been produced to date. Ingenious schemes have been devised to control the helicity (the combination of spin and linear motion) of OAM beams but they too remain restricted to this symmetric set of modes. It was not possible to write down some desired chiral state of light and have a laser produce it, until now.

The metasurface was built from carefully crafted nanostructures to produce the desired effect, and is the most extreme OAM structure so far fabricated, with the highest phase gradient yet reported. The nanometre resolution of the metasurface made possible a high-quality vortex with low loss and a high damage threshold, making the laser possible.

The result was a laser that could lase on OAM states of 10 and 100 simultaneously for the highest reported AM from a laser to date. In the special case that the metasurface is set to produce symmetric states, the laser then produces all prior OAM states reported from custom structured light lasers.

“What we find particularly exciting is that our approach lends itself to many laser architectures. For instance, we could increase the gain volume and metasurface size to produce a bulk laser for high-power, or we could shrink the system down onto a chip using a monolithic metasurface design,” says Forbes.

“In both cases the lasing mode would be controlled by the pump’s polarisation, requiring no intra-cavity elements other than the metasurface itself. Our work represents an important step towards merging the research in bulk lasers with that of on-chip devices.”

South Africa’s laser history dates back to soon after the very invention of the laser itself, then at the CSIR’s National Physical Laboratory.  It continues today with seminal advances from Prof. Forbes and his team, including the world’s first digital laser in 2013, the first twisted light laser in 2016 and now the first super-chiral laser.

This laser demonstration follows on the heels of the 2019 demonstration of the first Fractal light from lasers. The latter work, also performed by PhD student Hend Sroor, made international news and was selected by the OSA as one of the top 30 optical advances worldwide in 2019.