“Investment in quantum technologies in South Africa is crucial if we want to leverage the next level of discovery research,” says Professor Zeblon Vilakazi.

Vilakazi, Deputy Vice-Chancellor for Research and Postgraduate Affairs at Wits University, will be chairing the Department of Science and Innovation’s (DSI) National Working Committee to develop a Framework for Quantum Computing and Quantum Technology (NWG: QC&QT) driven research and innovation in South Africa.

Vilakazi, who was instrumental in Wits becoming the first African partner on the IBM Q Network earlier this year, together with the Director: Research Development at Wits, Dr Robin Drennan, form part of the NWG: QC&QT that also comprise of representatives from various higher education and research institutions in South Africa, as well as from IBM Research – Africa. 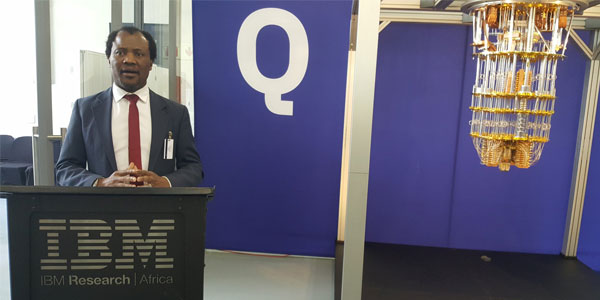 “It is most appropriate that the DSI are putting together a team of leading scientists and researchers to advise on South Africa's responsiveness to this fast-developing technology.”

According to the DSI, at the core of the Fourth Industrial Revolution (41R) is the emergence of cyber-physical systems, which are based upon the ability to collect massive amounts of data, manipulate and analyse it efficiently, and transfer it fast and securely. Quantum technologies have the potential to realise this vision.

The initial focus of the NWG: QC&QT will be as follows:

Vilakazi says the actual Secretariat support for the NWG: QC&QT will be provided by Wits University that already has expertise in this field. “One of the world-leading experts in quantum technologies and lasers, Distinguished Professor Andrew Forbes from the Structured Light group in the Wits School of Physics is one of the key members of the team. Quantum computing researchers from the Universities of KwaZulu-Natal, Stellenbosch and Pretoria, and other universities are also involved.”

“One of the key challenges in our current economic climate will be around the resources and how to liberate the necessary resources and focus on how this key, strategic investment ought to be made by prioritising certain areas and consolidating where possible,” says Vilakazi.

“It is a sense of pride for Wits that is right at the centre of this fast-evolving project which we hope, by the end of March next year, will yield something that will shape the way government and other universities think around the quantum technologies.”

Read more about our new technologies research at www.wits.ac.za/future/