From hieroglyphics to emojis, and grunts to gestures, humans have always used multiple modes to communicate, including language. 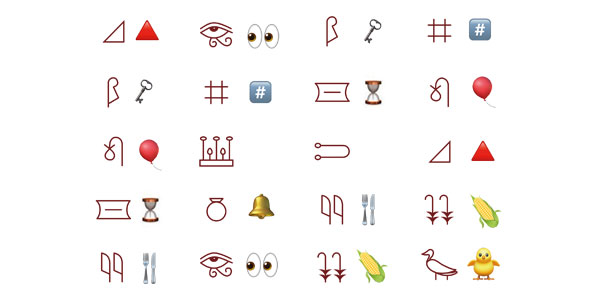 If you’ve ever sent a text using emojis, which the recipient received and understood, then you’ve communicated in a new language code. Communication codes have been with us since the grunts of our ancestors developed in to the first languages – Aramaic, Sanskrit, Tamil – the latter having made an appearance in 300 BC and considered the world’s oldest language.

Dr Gilles Baro, a sociolinguist at Wits, says that what we consider languages today are “organised, systematised guides to communication”. “People have always communicated using multiple modes, such as gestures, sounds, words, scripts and images. Languages are one of those modes and they are not ‘invented’. Rather, people – usually the elite – decide on a norm for communication, and that is what we consider ‘language’ today.”

Over time, this code evolves, says Maxwell Kadenge, Associate Professor and Head of the Department of Linguistics in the School of Literature, Language and Media at Wits. And where this code will be in future is anyone’s guess.

“Languages evolve naturally as a result of the migration of people, which in turn results in languages getting into contact with each other. Think of Afrikaans, which was originally spoken by the Dutch, but began to develop distinct characteristics as a result of its contact and borrowing from South African languages, especially Khoe and San languages.”

Similarly, says Kadenge, South African spoken languages that evolved because of contact between existing languages include Fanagalo and Tsotsitaal. “Both of them have borrowings from Bantu languages like Zulu, Xhosa, English and Afrikaans. Chilapalapa developed in Zimbabwe [then Rhodesia] from the contact between English, Shona varieties and Zambia languages,” he says.

Baro says that along with migration, new environments and technology also influence how language evolves. Emojis and text language are an example of how spoken language has merged with digital communication.

“Today, considering the internet, language is more open and in a way more vulnerable to be changed or influenced. We are exposed to a lot more variations than in the past. For example, a study done at the University of Cape Town showed the increasing use of the word ‘like’ as a quotative, hedge, or discourse particle by young South Africans was influenced by their exposure to North American popular culture, via movies and songs. Often the accent and vocabulary of a nearby community will influence a language too, through the borrowing of words.”

A quotative is a grammatical device to mark quoted speech – essentially “spoken quotation marks” – while hedge and discourse particles make speech less direct and manage the flow of dialogue.

“The word ‘language’ is broad and fluid, as it has both linguistic and political connotations. In simple terms, a language is a communally owned means of communication, which is passed on from one generation to the other through the process of socialisation,” says Kadenge.

The reason we have differences in languages and dialects is essentially to understand each other in a particular space and time.  “One of the criterion that are used to consider varieties such as dialects of the same language, or as distinct languages, is mutual intelligibility. This simply refers to the degree to which speakers of different languages understand each other in the same conversation,” he says.

Kadenge explains: “Normally, varieties that are mutually intelligible are considered dialects of the same language. For example, the Zimbabwean language – Shona – is made up of four main dialects, namely Karanga, Zezuru, Korekore and Manyika, whose degree of mutual intelligibility varies. These varieties are considered dialects of the Shona language. However, Scandinavian languages – Danish, Norwegian and Swedish – are mutually intelligible, just like the Shona dialects, but are considered different languages, probably because they are spoken in different countries. Against this background, the question on what makes a language a language is not easy to define.”

Some would argue that language is steeped in our identity, and can separate communities. Baro says variations in language are also clues to particular traits of identity. “So when hearing someone use language, we can guess their gender or sex, race, class, etc.”

Language, being a social aspect of life, has the power to divide as much as it brings people together. In South Africa particularly, it is contentious when public discussions are held in a language that only some can understand. People who cannot speak the language would undoubtedly feel excluded from the group.

“Languages signify identity and belonging. This is primarily because people who speak the same language understand each other, the languages contain words that all the members of a community understand,” Kadenge says.

“In South Africa, due to internal colonialism, some big and politically powerful groups tend to suppress smaller groups. This is evident in language policies and practices. Why is it that the national anthem has English, Afrikaans, Nguni and Sotho languages but does not include Venda and Tsonga languages? The national anthem is one of the main national symbols; sacrosanct heritage and rallying point of the country. This tells you who is in power and who is not. Language symbolises power, and when you exclude some languages in the linguistic landscape, such as a national anthem, you are disempowering the speakers.”

But language also allows us to pass our cultural values and sensibilities from one generation to another, says Kadenge. “Hence, we usually say language is a carrier of culture. It is the means through which we share our values and socialise our children.”

Simultaneously, language also allows us access into other cultures. “Many people around the world now have access to the Chinese culture because the Chinese language is spreading around the world through the establishment of Confucius Institutes and the teaching of the language all over the world. This is how English culture has spread around the world. English is now considered a global language. Right now, South Africa is strengthening its links with East Africa by introducing the teaching of Swahili in its education system. It is why Swahili has been taught at the University of Zimbabwe for a while.”

While the number of spoken languages is said to be reducing globally, language code is developing in other ways. English is being manipulated, moulded and restructured using psycholinguistics, or psychology of language, which considers the way that it is shared and understood.

Baro adds, “Agency is important, meaning that people purposefully make use of different variations of language in order to perform aspects of identity. Formality versus informality, humour, or wanting to sound serious, for example.”

“Because of our agency to use language as one form of communication, we get to express ourselves using language based on how the language and its different forms or variations are perceived in society. One will use different forms of language if they want to appear friendly or unfriendly, for example. This is why language is considered a system, because each word, sound, accent, variant, indexes a particular meaning,” says Baro.