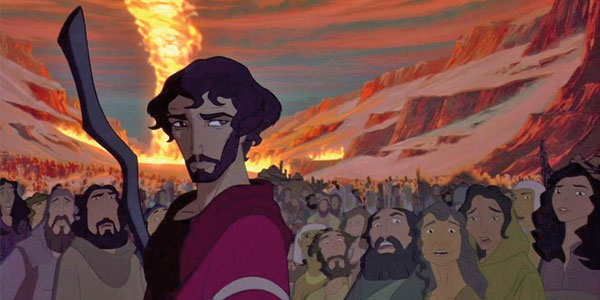 The Bible is one of the most important texts in human history. It has shaped the English language and it has governed many aspects of society in Africa, South, Central and North America, Europe and parts of the Middle East. The laws and codes that govern the behaviour, the socio-political and economic contracts of a large part of our society, and which mediate their lives, can often be traced back to the Bible.

Rachel van Rooyen is a teaching assistant and researcher in Digital Arts at Wits. She holds a BSc in Physics from the University of Pretoria and a Master’s in Digital Arts, specialising in animation, from Wits. Exposure in her childhood to KTV, Nickelodeon, and Cartoon Network kindled a lifelong love for animation and storytelling.

For her Master’s, van Rooyen analysed two scenes in the depiction of the characters in the DreamWorks Studio film The Prince of Egypt (1998). She aimed to examine the symbolism, language, culture and historical context of the Bible, and the audio-visual animation of its stories.

“Bible stories are highly familiar,” says van Rooyen. “There are story arcs that even modern films take from biblical sources. For example, The War for the Planet of the Apes uses the concept of The Alpha and Omega [the main antagonistic force in the form of a military organisation that goes by the same name in the film], and the apocalypse.”

Even if someone has never read the Bible, they still know many of its stories, says van Rooyen. In terms of visual representation, sequential imagery is a strong part of that history, and even the religious practice of Mass uses storytelling that involves pictures – especially in the re-enactment of the Last Supper.

Indeed, in their book, Who’s Bigger? Where Historical Figures Really Rank (Cambridge University Press, 2003), Steven Skiena and Charles Ward formulated an internet-based ranking system that revealed the Christian Messiah to be the most recognisable figure ahead of William Shakespeare and Alexander the Great.

Van Rooyen explains how the adaptation of biblical accounts into visual media has a centuries-long history and her research examines the representational processes involved for animation to communicate meaning through semiotics (the study of signs and symbols and their use or interpretation) and discourse theory.

A major feature of animation is its use of exaggeration and its requirement that viewers suspend disbelief, while simultaneously making an implausible situation easy to digest. This makes for a beneficial link with biblical accounts, which require the same from their audiences.

In analysing two case studies from The Prince of Egypt, van Rooyen studied how the film uses visual cues – especially colour and scale – to contrast the characters of Moses and Rameses, and how animation can be used to “bring the story of Moses to life”.

The scenes of the parting of the Red Sea and the 10 Plagues of Egypt, for instance, respectively express the things that stand in the way of our dreams (the Israelites’ quest for freedom), and God’s moral law and justice when dealing with the unrepentant (Rameses refusing to free those in captivity).

“These scenes are supernatural, so it is easier to process them in animation than in live action film,” says van Rooyen.

In a second case study, van Rooyen examined the depiction of the two Egyptian priests, Hotep and Huy, who served under Pharaoh. The priest characters’ physical proportions are exaggerated, using visual cues that audiences find familiar and from which they derive meaning. Hotep has short, rotund features that audiences associate with trustworthiness, while Huy has tall, thin, angular features that viewers have come to associate with evil.

“These qualities are reflected in their characters. While both priests are disdainful towards Moses, Hotep is more passive-aggressive toward him, but Huy is more derisive in his attitude,” van Rooyen explains.

“When they both approach Rameses to broach the subject of Moses’ crime of killing an Egyptian, yet being unpunished, Huy yells ‘death!’ in answer to Hotep’s explanation of what the law demands as a punishment, even before Hotep is able to finish his sentence. Hotep then finishes with ‘we hesitate to say’ to try and soften Huy’s obvious contempt.”

The Prince of Egypt has performed well commercially and has become an animation classic, pleasing audiences while maintaining respect across the Abrahamic religious community, says van Rooyen.

“DreamWorks adapted The Prince of Egypt to ensure audience engagement so that people today could identify with the various elements of the story, such as Moses’ relationship with his brother, the main characters’ personal struggles, marriage and its relationship to kinship, migration, belonging, how the villain is haunted by the legacy of his father, and the wider stories of Egypt and Israel”.