Telling tales of ages on stages

For a Wits postgraduate drama student theatrical story-telling is a means to bridge generations and mutually empower seemingly disparate groups. 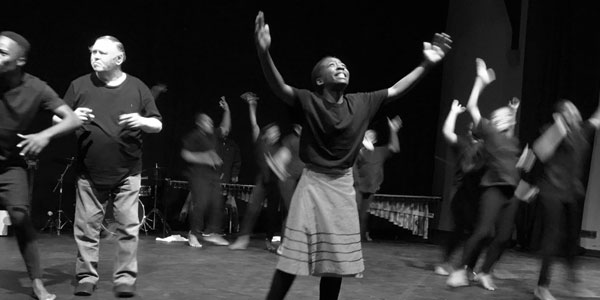 “I perform my story and that is a wonderful feeling … To be in front of people, telling them my story, I feel a lightness of spirit.”

This is the declaration of Flora Mtembu, an elderly woman based in Hillbrow, who in her sunset years has embarked on a new path as a stage actress.

“Finding my identity confused me most of the time and it made me feel like I have no ambition. However, listening to other stories really changed my mindset of how I’m not alone.” So reflects Tsepang Lebelo, a teenage budding thespian, about what sharing a stage with, not just his peers but also his elders, has come to mean to him.

Another teen, Mbongiseni Mahlangu, adds that through this process: “Now I'm growing… I'm now my real self!”

These are the comments of but three participants in a group of elders and youngsters based in the Johannesburg city centre, brought together through theatre. They have come to share not just a stage, but also their own stories, struggles and support.

Behind the scenes, it is thanks to Wits Master’s student, Gcebile Dlamini, that this groundbreaking intergenerational theatrical work is taking place.

“My focus now is on the coming together of these intergenerational stories. The young find themselves by telling their stories and hearing those of the elderly. The elder people, in remembering their stories, also find a sense of purpose.” This is how Dlamini explains some of the outcomes of her work in making theatre productions with casts united by a love of drama but decades apart in age.

This year, Dlamini, who has also served as an external examiner at Wits for Applied Theatre Studies, embarked on her Master’s in Creative Research through Drama for Life. With funding from the Nedbank Arts and Culture Trust and the National Arts Council, Dlamini hopes to continue the intergenerational theatre work that began many years ago.

At that time, as a drama graduate desperate to escape waitressing, Dlamini dropped off her CV at the Hillbrow Theatre Project, now renamed the Outreach Foundation. She was hired as a director of an afterschool programme after proving her mettle by conjuring up a full production, involving over a dozen teenagers, within just two weeks.

As her engagement with these teenagers continued, Dlamini began to realise the impact that creating theatre had on them and their lives.

“These kids didn’t have drama at school. They knew they loved it but they’ve had nowhere to express it; this was their only outlet.”

Productions she created with the teenagers featured hard-hitting topics like religion and sexuality, xenophobia and the Rwandan genocide. These works transformed the way in which these young South Africans began to see themselves: “They become fully conscious. They just wanted to do things and take action, they become advocates. They would reflect about how they were coming to understand who they were, in this place, South Africa, on the continent and in the world.”

Dlamini began to dream of finding new ways to deepen this kind of exploration through drama. When one of the cast members from a production at the Outreach Foundation mentioned that an old age home in Hillbrow was looking for volunteers to help with things like cleaning, Dlamini decided to take it a step further – she proposed to the staff of the Tswelopele Frail Care Centre that any willing residents join her teenage students on stage.

“The first group that we had was a group of four men. They were aged between about 65 upwards and they were very energetic.”

The first key production to showcase the collaboration was called young@home.

“The first rehearsal was so scary … The kids are used to being there to show off themselves and the elderly, well … for many, firstly, they just want to be able to go out to a theatre! So you have to try and bring these two energies together. They live in two separate worlds. And, as the director, you are in the middle.”

Yet, soon the two groups found a synergy

“At first the elderly kept quiet. We had to teach the teenagers that it was not only them who could offer opinions. They too had to give the elderly a platform to talk.  And once the elderly started being able to voice their ideas, the kids started understanding them – and then the two groups gelled.”

In a production video released by the Outreach Foundation, the care and connection between the group resonates – not just on stage, but also backstage.  At one point, a young girl massages the feet of her elderly co-star in between scenes. In another, a grandmother figure holds hands with a young actor while waiting in the wings.

Still Dlamini remained hungry to weave a web of theatrical magic over disparate groups of people.

In 2018, looking for her next challenge, she approached the Johannesburg Society for the Blind to find out if any of those under their care had ever felt an acting itch.

Yet, immediately it was the visually impaired who took control of the situation.

“They told the kids: ‘Listen, we are like you. We were once your age; some of us one could see at some point; some of us never saw anything. We do not want to be treated like we can’t do anything. We have all the feelings that you have … What you can do, we can do. The only thing we can’t do is drive’.

They also told the others: ‘And please don’t be afraid to say when you speak to me, ‘can you see?’ ‘Because, yes, spiritually we can see’. From then, everything was easy,” recalls Dlamini.

The production that ensued, In My Mother’s Womb, was performed mainly in the dark, using sound and movement illuminated by flashes of light.

It was one from which the response of the audience was uniform: “They cried.”

It is not just the profound personal growth that the cast members undergo, which moves Dlamini about the work she does; it is also the professional pride and integrity with which the participants come to conceptualise their theatrical vocation.

“It is amazing to see the level of artistry that is now in their heads. They are very much aware that they are actors and actresses.”