The first Earth System Model developed and based in Africa are creating one of the most reliable and most detailed modulations of climate change. 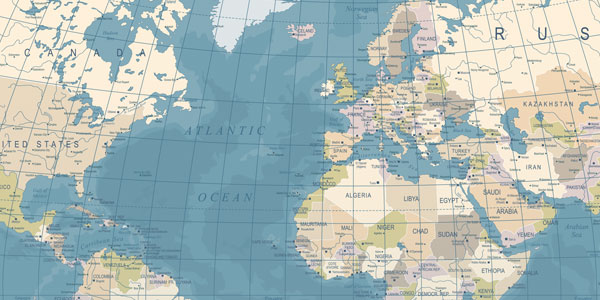 What does it take to recreate Earth? A couple of thousands of line of code, throw in some data from all the weather stations around the world, and a supercomputer.

Add to that mix a specialist climate model developer such as Professor Francois Engelbrecht from the Wits Global Change Institute and you’ve got the first Earth System Model developed and based in Africa, which is to contribute to the World Climate Research Programme’s Coupled Model Intercomparison Project Phase Six (CMIP6).

Engelbrecht, who joined Wits in January 2019 after working at the Council for Scientific and Industrial Research (CSIR) for a decade, is working to build a mathematical model of Earth, including all the atmospheric, oceanic, land and carbon cycle processes and their interactions, in order to be able to project the impacts of future climate change in Africa and across the globe. Towards this end, he is working in close collaboration with scientists from the Commonwealth Scientific and Industrial Research Organisation (CSIRO) in Australia, the CSIR in South Africa, the University of Cape Town (UCT) and the University of Venda.

“Coding is part of my life. I code every day,” says Engelbrecht, who is one of only a handful of climate model developers around.

How to build an Earth System Model

Building an Earth System Model is no simple task. To do this, Engelbrecht needs to process data from 50 layers of Earth’s atmosphere, which is approximately 50km deep; the ocean from its surface to the bottom, divided into 30 layers and the land, divided into six layers to simulate soil moisture and temperature.

An Earth System Model provides a numerical sampling of all the physical processes occurring in the three-dimensional coupled ocean-atmosphere-land system. He also needs to include ocean and atmospheric chemistry, including the effects that the carbon cycle has on the climate system.

“Both the ocean and the land are large sinks (absorbers) of carbon. There are also natural processes that release carbon dioxide into the atmosphere. We need to see how these processes work and model how the carbon cycle will impact climate in the future in the presence of increased carbon dioxide emissions emanating from our dependence on fossil fuels for energy,” says Engelbrecht.

An Earth System Model is based in a set of mathematical equations that describe how Earth changes over time to changing radiative forcing (for example, increasing concentrations of carbon dioxide). That is, when the laws of physics is applied to the atmosphere, one obtains a set of partial differential equations. These equations can be solved numerically to get a picture of our future climate.

“The moment that you work with these types of data and numerical mathematics, you need a supercomputer to process it,” says Engelbrecht.

“The mathematical model breaks up the atmosphere in a number of layers, and the Earth in horizontal grid points. The larger the computer, the more grid points you can add, which makes the model more accurate.”

Engelbrecht only in recent years gained access to a supercomputer with sufficient processing power to undertake these computationally expensive simulations and process the enourmous  of data. This is the Lengau cluster of  the Centre of High-Performance Computing (CHPC) of the Department of Science and Technology based in Rosebank, Cape Town. A single climate simulation requires the use of hundreds to thousands of processors on the cluster, applied in parallel to solve the intricate equations of the Earth system.

Even on the fastest supercomputers of the world, the spatial resolution of Earth System Models remain limited to about 100 km in the horizontal. In a recent development, Engelbrecht and his colleagues are also moving into the world of Artificial Intelligence, to utilise specially engineered algorithms that can represent the finer details of the system at spatial scales not directly resolved by the Earth System Model.

“Traditionally the representation of fine-scale processes in Earth System Models was based on conventional statistics informed by field observations of how the fine-scale processes relate to the large-scale flow features of the ocean and atmosphere. Machine learning allows for more complex and thus more realistic relationships to be formulated between fine-scale and larger scale flow features in the climate system,” Engelbrecht states.

Engelbrecht, who did his PhD in numerical meteorology at the University of Pretoria leads the development of the global ocean model applied within the Earth System Model. The CSIRO provides to the system sophisticated global atmospheric and land-surface models, while the CSIR is providing and developing the carbon cycle model and atmospheric chemistry applied within the Earth System Model.

In order to describe an initial state of the ocean and atmosphere to the Earth System Model, Engelbrecht and his colleagues use information from weather stations all over the world, which is compiled and shared through the World Meteorological Organisation.

Engelbrecht points out that understanding the climate and carbon cycle of the Southern Ocean and the dynamics of the Antarctic sea-ice and ice sheets is critical to the reliable projection of future climate change.

Building an Earth System Model is a completely interdisciplinary task, involving experts from a variety of fields, including climatologists, oceanographers, ecologists, mathematicians, physicists, chemists and computer scientists. Engelbrecht intends to increasingly attract experts in all these fields to work together in building and improving the African-based Earth System Model.

“One of the reasons I came to Wits was to expose the Earth System Model development process to colleagues whom have leading expertise in oceanography, climatology, numerical mathematics, high-performance computing and artificial intelligence so that we can collaborate and jointly contribute to this truly multi-disciplinary field. We have already assembled at the GCI and the Wits Schools of GAES and APES a strong group of post-graduate students that will have the opportunity to work in this exciting multi-disciplinary field, while contributing their novel thinking to the Earth System Model,” he says.

“We are creating one of the most reliable and most detailed modulations of climate change for Africa. If we can reliably project  our likely climate change futures in Africa, then we can estimate risks to aspects such as water security, agriculture, biodiversity, and human health, and take timeous action through climate change adaptation and mitigation projects.”